Armed with push cards, customized face masks and signs, judicial candidate Rhonda Goode-Douglas spent Saturday morning greeting voters outside Congregation Coffee Roasters in Algiers. On Saturday afternoon, her opponent Derwyn Bunton posed with his wife Eileen and daughters Chloe and Reilly for photographs and video that will be used in social media. 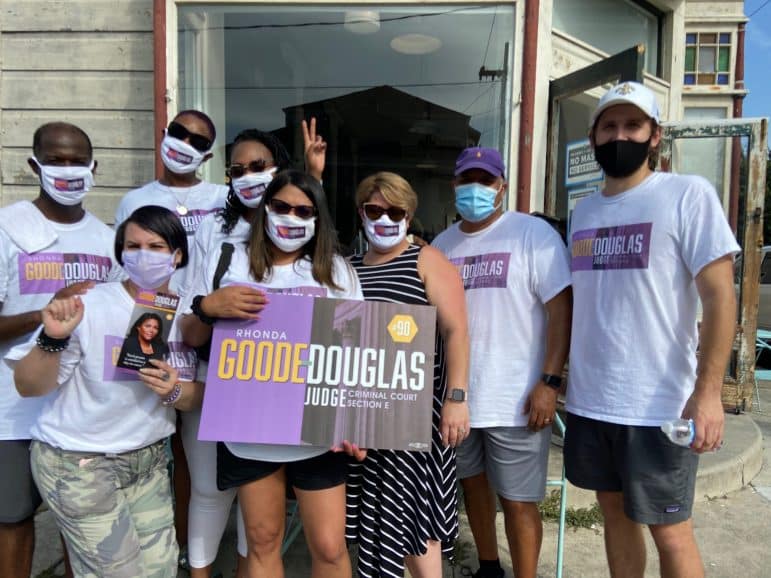 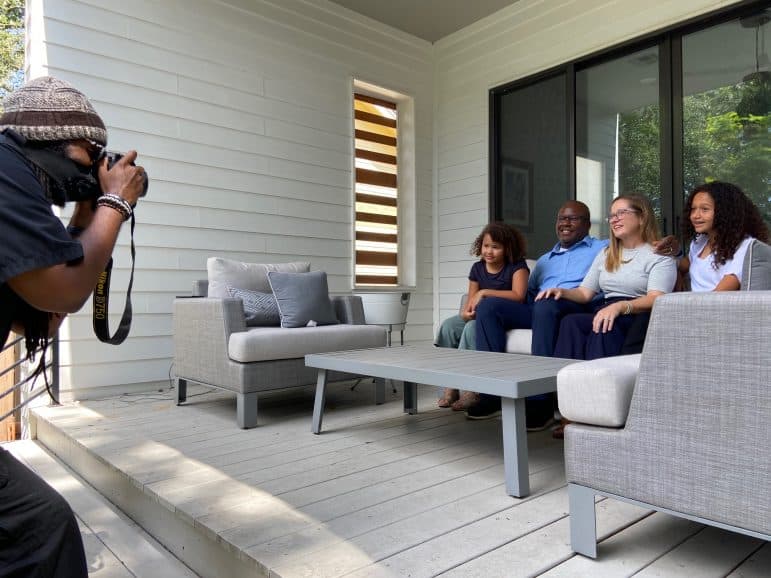 Both candidates would have attended the annual AFL-CIO Labor Day picnic in City Park today – always a highlight of the fall political season – had it not been canceled.

While Labor Day signals the beginning of the final two-month stretch before the Nov. 3 elections, New Orleans candidates up and down the ballot are continually adjusting to the new normal of campaigning during COVID-19.

“I came to this coffee shop because I wanted to meet the residents of Algiers Point,” said Goode-Douglas, a defense attorney who is running for Criminal District Court judge, Section E. “It’s difficult to spread our message and touch the community without being able to campaign door-to-door. We are dropping literature at people’s houses, but we are not ringing their bells.”

“Trying to win an election during a pandemic requires extra creativity as well as a heavy reliance on technology and social media,” said Bunton, Orleans Parish’s chief public defender and also a candidate for Criminal District Court Section E. “The usual canvassing, meet-and-greets and handshaking can literally place you, your volunteers and potential voters in danger, so we are being respectful and following the science.”

“Campaigns used to be about visiting people, but now they are all about content for social media,” said Ray Reggie, who has 36 years’ experience on political campaigns. “Everybody has a phone with them all the time. To get the message out in the most efficient, effective and inexpensive manner, I recommend mediums like Facebook, Twitter, Instagram, YouTube and others. Social media is the way campaigns are connecting and energizing their bases. It’s become an art, a discipline.”

Reggie sees a shift away from the reliance upon brand influences to family and friend influencers. “Candidates should use family, friends and co-workers to amplify messages through ‘likes’ and sharing. By sharing a post and tagging it, you can see the post move out quickly and organically. Tagging has ripple effects.”

Candidates in many of the down-ballot races often lack the financial resources for paid television commercials.  Short videos, even those shot with a cellphone, are a cost-effective alternative, Reggie said. “We live in a video-influencer world full of Facebook Live events and Instagram Reels. Young people don’t watch the 5, 6 and 10 p.m. news. They get their information from social media and could get excited about an election became of high-quality social media. The more viewers candidates engage, the more votes they will get at the polls,” Reggie said.

Social media expert Kristine Breithaupt and her staff of 11 are currently handling 16 campaigns for candidates and political action committees in four states. “Social media used to be an afterthought, but now it’s really the main event,” said Breithaupt, a Baton Rouge native who has worked in New Orleans since 2011. “Even the most seasoned candidates are finding themselves learning about engagement and targeting.”

Breithaupt’s social media staff are imbedded advocates who report on what’s happening in each campaign. With COVID-19 restrictions limiting a candidate’s movement around town, they have had to get much more creative by utilizing animated graphics and videos to maximize visibility. Breithaupt also said she and her team must portray their clients as sensitive to what the larger community is going through as a result of COVID-19.

“How we show the retail aspects of campaigns has changed from meet-and-greets to service events, handing out masks or working at food pantries. Ultimately we want voters to still feel like they are part of the democratic process even though they can’t come to events. When I get a picture of the candidates out in public, that’s really prized,” Breithaupt said.

Most candidates held virtual campaign kickoffs. One candidate hosted a caravan to celebrate his birthday. Virtual town-hall meetings and virtual endorsement meetings have become the norm. Several candidates are participating in drives to collect supplies for victims of Hurricane Laura.

Direct mail, phone banks, signs, billboards, ringless voicemail, robocalls, email and text messaging are all being used to increase candidate awareness and will become more important as early voting and Election Day near. Both are expected to be record-breakers.

Virtual and drive-by fundraisers continue, with donors receiving a bottle of wine or even a pint of gumbo from Dooky Chase. At least one in-person fundraiser is already on the books for late September. Other candidates are waiting for New Orleans to enter Phase 3 before announcing in-person events.

Fundraising has been difficult for many down-ballot candidates, but incumbents and candidates with a name familiar to voters are having more success. “We’re all drawing from the same small pool of donors, many of whom have been impacted by the virus and the economic downturn,” said one first-time candidate.

“Candidates have to be ready to pivot. They can’t expect to do what they always have done before. Those who are not willing to lend their campaigns money are not being realistic,” said political consultant Leo Marsh, a retired AT&T external affairs executive who is currently advising several candidates.

Marsh believes that social media is the only place where money should be spent. “What’s the value of putting signs up when there is little transit ridership or vehicular traffic? Who is going to read billboards when people are at home on their computers?” he asked. “With the current time constraints, candidates need to jump in the water and get cold really fast.”

U.S. Rep. Cedric Richmond, who was recently named a co-chair of Democratic presidential candidate Joe Biden’s transition team, will host a virtual fundraiser with Sen. Kamala Harris on Tuesday, Sept. 15, at 4:15 p.m. Richmond also serves as a co-chair of the Biden-Harris campaign.  Tickets for the virtual fundraiser begin at $250. RSVP is required. For more information, contact Georgette Brammer at SEFinanceRSVP@joebiden.com.