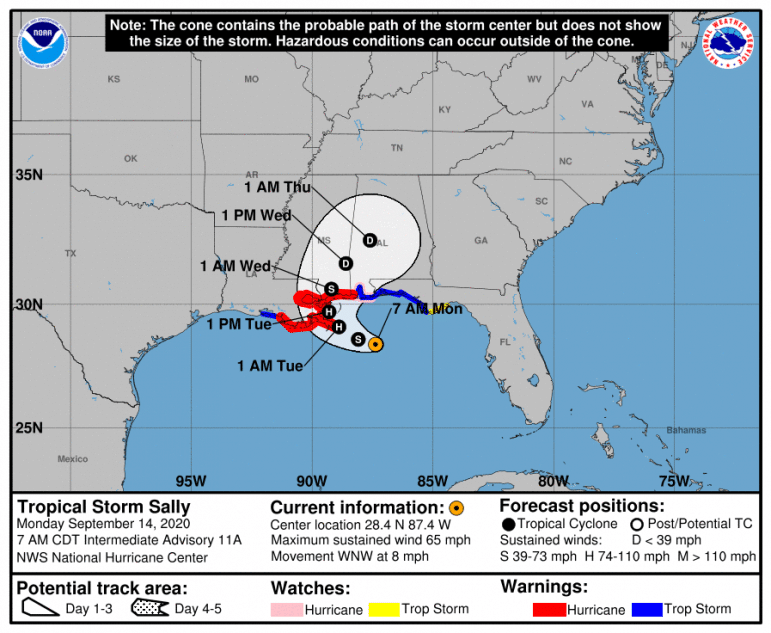 Tropical Storm Sally is expected to make landfall late Monday or early Tuesday as a Category 1 hurricane and make its presence known throughout the metro area through Wednesday.

Sally was moving slowly west-northwest across the Gulf of Mexico on Monday morning, the National Hurricane Center reported. At 7 a.m. it was about 115 miles from the mouth of the Mississippi River with maximum sustained winds at 65 mph.

Due to a shift in the forecast cone to the east, rainfall is now forecast to total between 4 to 6 inches in New Orleans, with locally higher amounts possible. Parking on neutral grounds and sidewalks is allowed until further notice.

Residents are urged not to block intersections, streetcar tracks, or bike paths. Driving through underpasses should be avoided during severe weather because they are prone to flooding.

Sally is expected to build strength it approaches land, producing 8 to 16 inches of rainfall with isolated amounts of 24 inches over portions of the central Gulf Coast from the western Florida Panhandle to far southeast Louisiana through the middle of the week. Life-threatening flash flooding is possible. In addition, this rainfall will likely lead to widespread minor to isolated major flooding.

The Sewerage & Water Board of New Orleans said Sunday it is ready for potential impacts from Tropical Storm Sally. All 99 drainage pumps are available for service, it announced. “One constant-duty pump is out of service, but these are smaller units used to regulate groundwater in canals and are not large enough to be critical during a flood fight,” officials stated. Turbines 1, 3, 4 and 6 are available for service, as well as all 5 electro-motive diesel generators and all frequency changers.

New Orleans remains under a hurricane warning, a notice that residents should prepare for a hurricane’s destructive winds. It’s also under a storm surge warning, signaling a potential danger of life-threatening inundation from rising water moving inland from the coastline during the next 36 hours.

City officials said Monday morning that it continues to prepare for Sally. Text SALLY to 888777 to receive updates from the City.

There is a 70 to 90 percent chance of tropical storm force winds (sustained winds over 39 mph) in the metro area. Tropical storm winds are possible for a period of time between Monday afternoon through Wednesday morning.

Prepare for high winds by securing trash bins, outdoor furniture and loose branches. Regularly scheduled trash and recycling collection continues today; however, residents are asked to immediately secure bins after collection ahead of the storm.

Due to the prolonged forecast of high winds, power outages may occur. Prepare for power outages by charging electronic devices, turning your refrigerator to its lowest setting and having a flashlight ready.

Gather emergency supplies, including food, water, and medications, for at least three days. If you plan to operate a generator in the event of a power outage, please ensure it is in a well-ventilated location outside and away from all doors, windows, and vent openings. Multiple deaths occurred in Louisiana in the aftermath of Hurricane Laura due to improper generator use.

For more information, visit the New Orleans Fire Department website. Those who might need extra help during a storm due to medical or mobility needs should sign up for the city’s Special Needs Registry. To register, call 311 or go to specialneeds.nola.gov. People on dialysis should contact their provider to receive treatment before the storm.