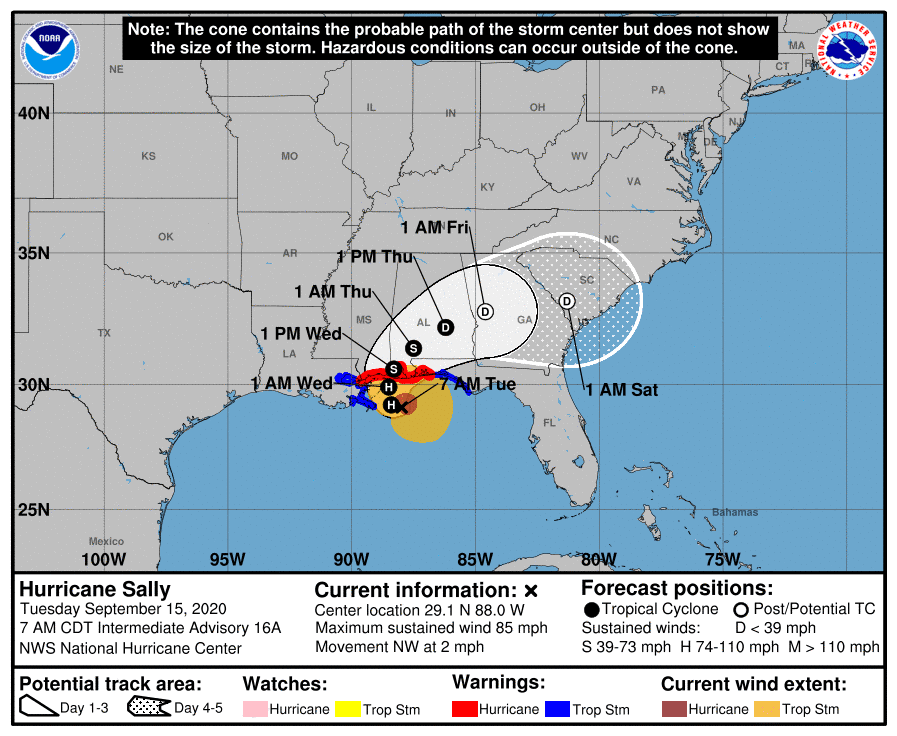 The National Weather Service downgraded the hurricane warning for New Orleans to a tropical storm warning early Tuesday, as Hurricane Sally sat in the Gulf of Mexico off the Mississippi-Alabama border. The storm is expected to make landfall late tonight or Wednesday near Mobile, putting New Orleans on Sally’s west side, where the threat is lower.

City Hall, NORD, libraries and trash collection will resume normal operations Wednesday. Vehicles will need to be off the neutral grounds by 8 a.m. on Wednesday.

The Category 1 storm, which has 85 mph winds, has been moving at 2 miles an hour. “It’s just crawling,” said meteorologist Kevin Gilmore with the local National Weather Service in an early-morning update.

“Here in New Orleans … we can be thankful that this storm did not come up about 200 miles west at this speed,” Gilmore said. “That would have brought terrible impacts to large areas of southeast Louisiana. But know that, with weather, things change. The track could shift.” The National Hurricane Center warns that Sally could bring “extreme life-threatening flash flooding” to the parts of the Gulf Coast.

A storm surge warning also remains in effect locally, with 6 to 9 feet of coastal flooding possible in areas outside the levee system and 2 to 4 feet on Lake Pontchartrain. “Residents should continue to stay weather-aware,” city officials stated.

Sally’s languid movement had weather officials concerned it could develop into a Category 2. But it has been sitting in one spot long enough that it is churning up cooler water from beneath the surface of the Gulf, Gilmore said. Along with drier winds from the north, he said, this weakens the storm.