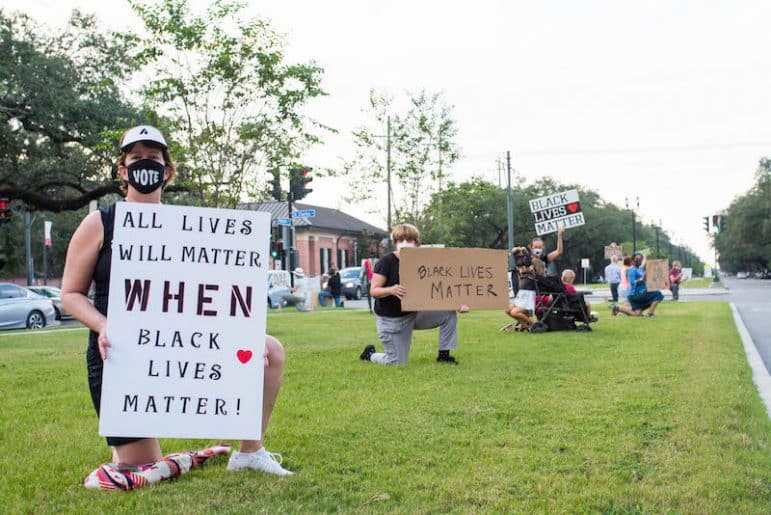 Angie Breidenstine kneels with others for 9 minutes near the corner of St. Charles Ave. and Napoleon Ave. (Camille Barnett, UptownMessenger.com)

Protests and demonstrations calling for social justice have continued across the country for months now, including here in New Orleans. Every night, groups in neighborhoods throughout the city come together at 6 p.m. on-the-dot to silently kneel, sit or stand for nine minutes to demand justice for George Floyd, who was murdered by police officers in late May, and to show solidarity for the Black Lives Matter movement.

“The Kneeling for 9 Minutes movement is bringing together neighbors from all walks of life and various backgrounds who all want to see our country make more progress toward ending systemic racism and creating a more just and equitable society,” said resident Angie Breidenstine, an organizer of one of the Uptown nightly vigils. “Meeting every night is a way to keep the issues visible and central–for ourselves and for our community.” 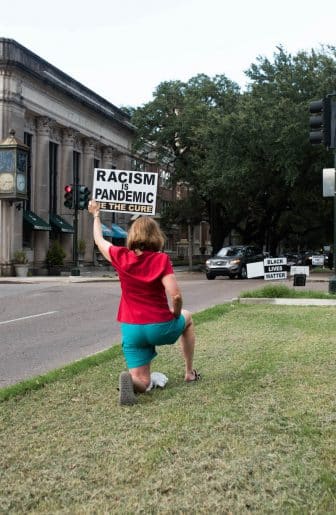 A neighborhood resident kneels in silence and holds a sign toward traffic on Carrollton Ave. (Camille Barnett, UptownMessenger.com)

Purposely gathering on neutral grounds during high-traffic hours at main intersections—such as Oak Street at Carrollton Avenue, Magazine Street at Napoleon Avenue, and Bonnabel Boulevard at Metairie Road — the demonstration is blatantly visible to the hundreds of cars that pass each evening.

While some respond with snickers and shouts of opposition from rolled-down windows, most responses come in forms of car honks and chants of support.

The nightly movement began in June in a Gentilly neighborhood. Colette Delacroix and her neighbors felt it important to participate in the protests happening in response to the killing of Floyd and other acts of police brutality. However, they had concerns about the spread of COVID-19 and increased susceptibility due to underlying health conditions.

Instead of attending the crowded protests, Delacroix began safely kneeling in her front lawn every evening at 6 p.m. and sent out an email en masse to friends, neighbors and out-of-state family, urging them to do the same. Her Gentilly neighbors began to join her, and others brought her message to various neighborhoods throughout the city.

Currently, the vigils are held at 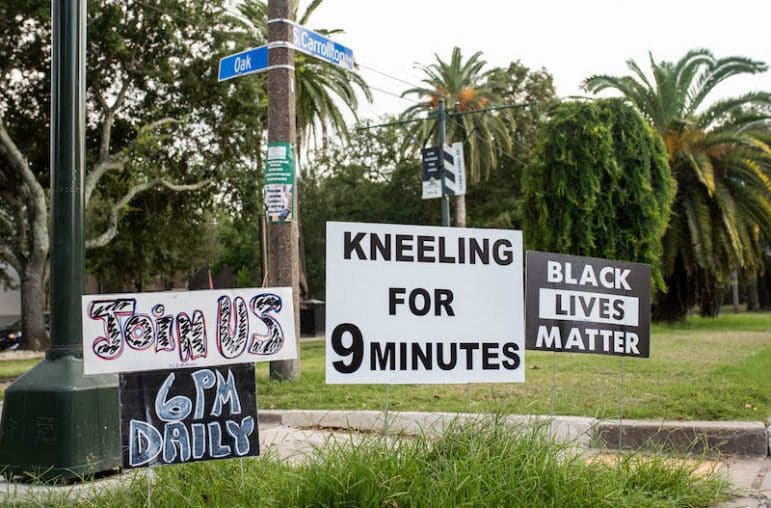 A sign on the corner of Oak St. and Carrollton Ave. invites passers-by to join the Kneeling for 9 Minutes movement. (Camille Barnett, UptownMessenger.com)

Delacroix admits that although seeing the movement pick up in different locations across the city boosts her spirit, she still feels troubled about the current events that have taken place since she began kneeling almost three months ago.

“It helps my heart, but the way I see it, a young man was shot seven times in the back,” she said about the recent police shooting of Jacob Blake in Wisconsin, “and then, people trying to protest it got shot by a young white man that high-fived police officers.”

Ione James has been a social rights activist in New Orleans since losing her 2-year-old son to gun violence in 1978. In recent years, she has persistently advocated for the mandatory use of body cameras within the Jefferson Parish Sheriff’s Department. She also feels that change begins by drawing attention to issues with visible activism.

“I think that we have to do something concerning social injustice. We have to raise awareness, but we have to do more than just raise awareness. We are in dire need of reform,” she said. “This is part of it, but the biggest part is policy change. These things have to be treated aggressively until we get unity, satisfaction and justice for all.”

James said that she attends the kneeling vigil at the Oak Street location every single evening. 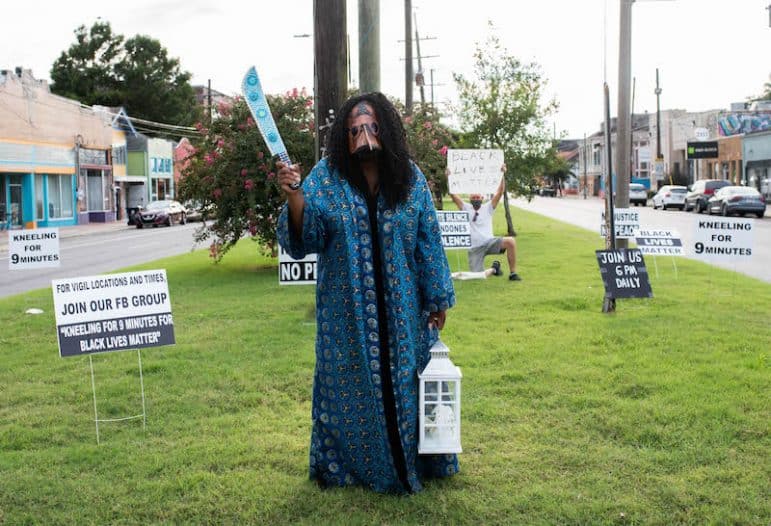 Cherice Harrison-Nelson, a Queen of the Guardians of the Flame Mardi Gras Indians, faces traffic and stands in solidarity with the vigil on St. Claude Avenue. (Camille Barnett, UptownMessenger.com)

Organizers encourage those that may want to participate in the Kneeling for 9 Minutes movement, but don’t see an established gathering point near them, to start one in their own neighborhood.

Breidenstine attended her first kneeling vigil on Oak and South Carrollton one night in June after reading about it in an article. Although she wanted to continue to participate and express solidarity, she wouldn’t be able to travel to that location every evening. So she decided to see if people in her neighborhood would be interested in starting a nightly vigil in their area.

One Saturday and Sunday, Breidenstine posted an announcement online and put fliers in people’s mailboxes. The first vigil on Napoleon Avenue at St. Charles Avenue was on June 15, two days after the announcement, and about 50 people attended in support.

“Anybody can initiate this in their neighborhood!” she suggested. “Try posting on Nextdoor and/or in a neighborhood group on Facebook, put fliers in mailboxes, email or talk to your networks, and consider putting fliers up in supportive neighborhood businesses. Once you’re out there, people will start seeing and hearing about it and more people will join you.”

The nightly vigils are scheduled to continue through the November presidential election with future discussions planned surrounding how the groups will move forward with advocacy afterwards, whether in the same and/or different forms. For more information and updates, join the Kneeling for 9 Minutes for Black Lives Matter Facebook group. See more vigil photos by Camille Barnett below. 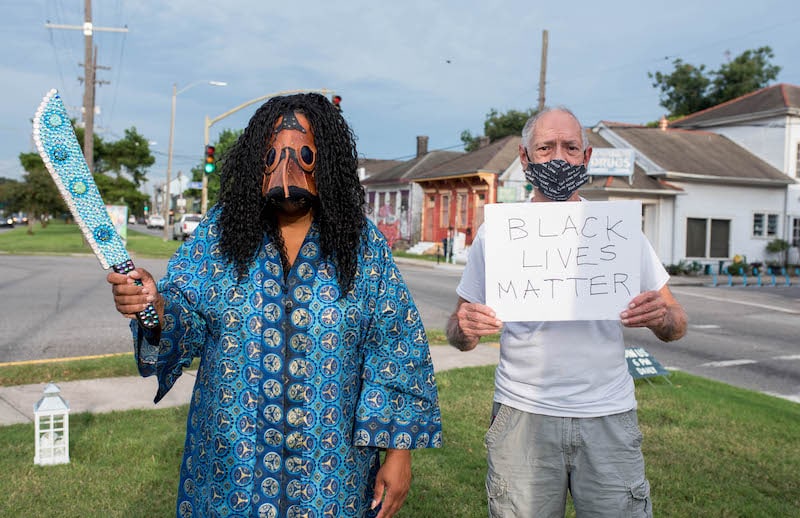 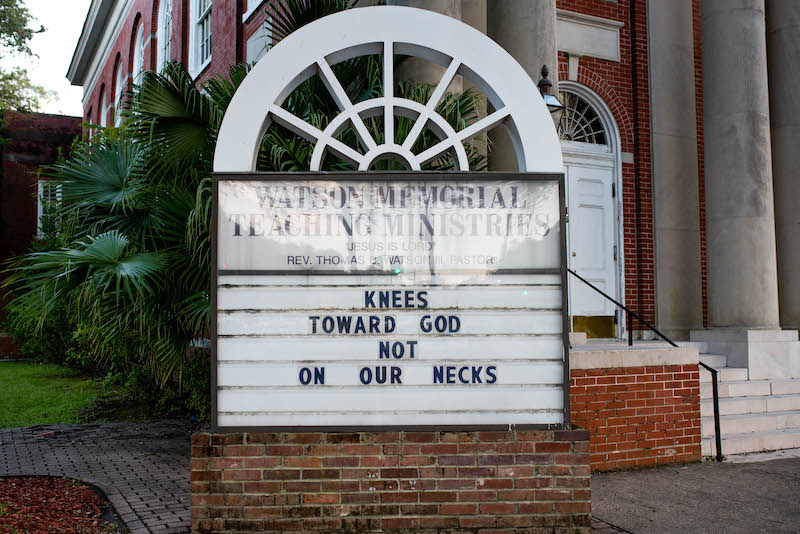 The marquee outside of Watson Memorial Teaching Ministries, across from where residents kneel at St. Charles Ave. and Napoleon Ave., reads, 'KNEES TOWARD GOD NOT ON OUR NECKS.' 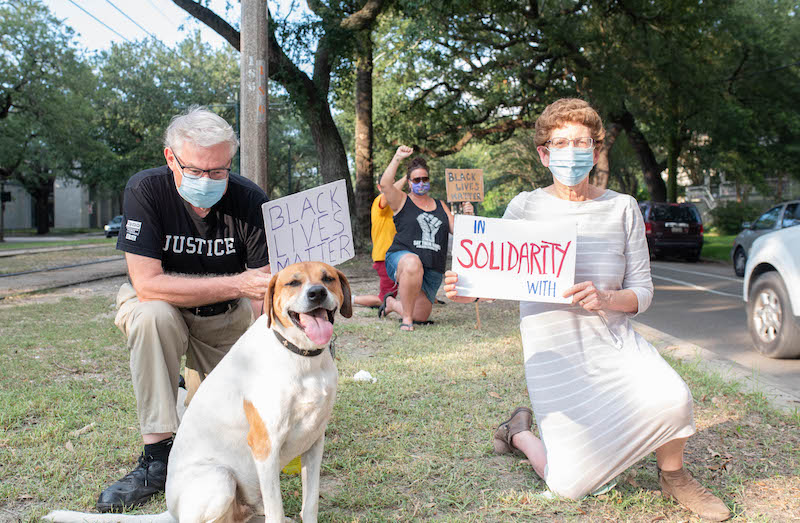 Residents disperse down the Carrollton Ave. neutral ground as they kneel in silence. 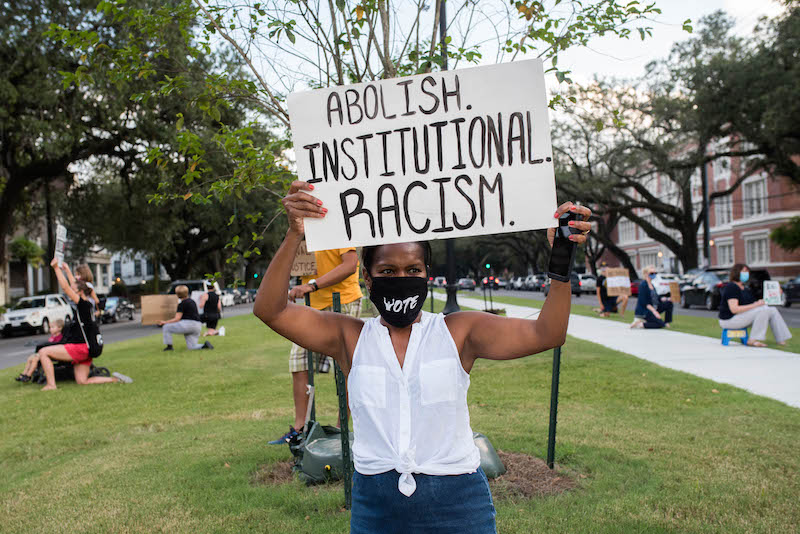 Neighborhood residents kneel and stand in silence at the corner of Napoleon Ave. and St. Charles Ave. One participant holds a sign that reads: 'Abolish. Institutional. Racism.' 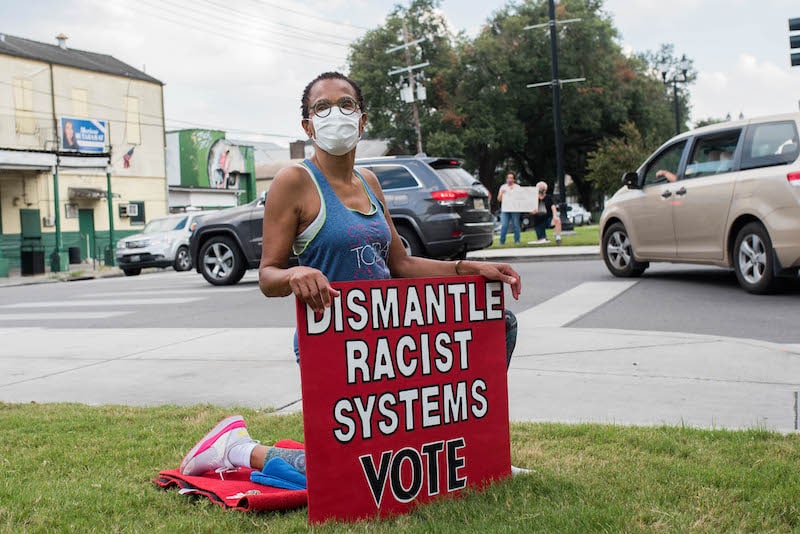 A woman kneels in silence and holds a bright red sign that says 'Dismantle Racist Systems' and 'Vote' toward oncoming Magazine St. traffic. 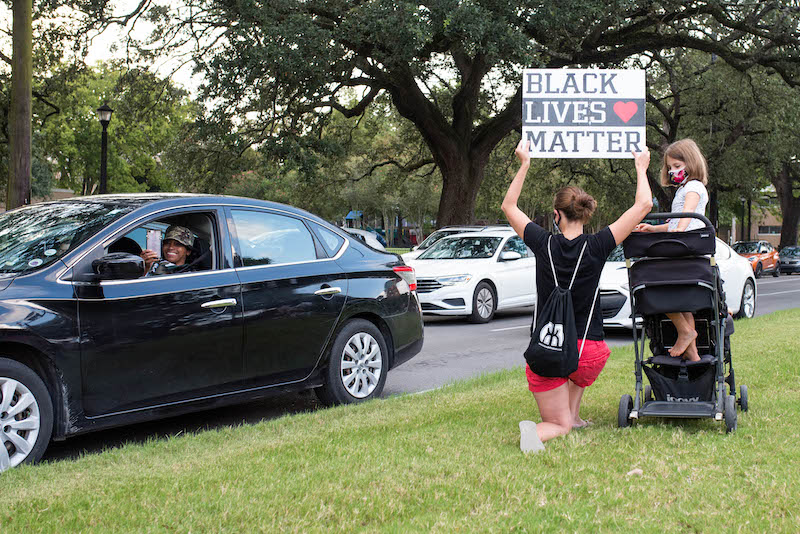 A woman driving down St. Charles avenue smiles as she documents the vigil on her cell phone. 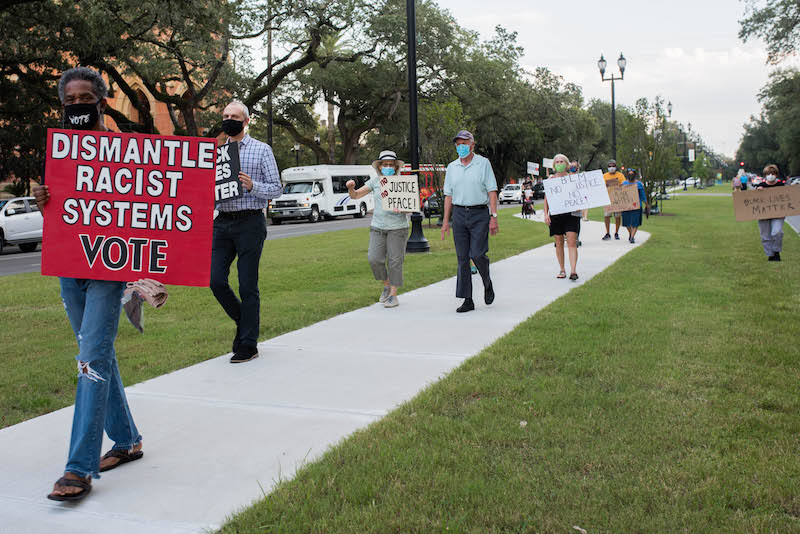 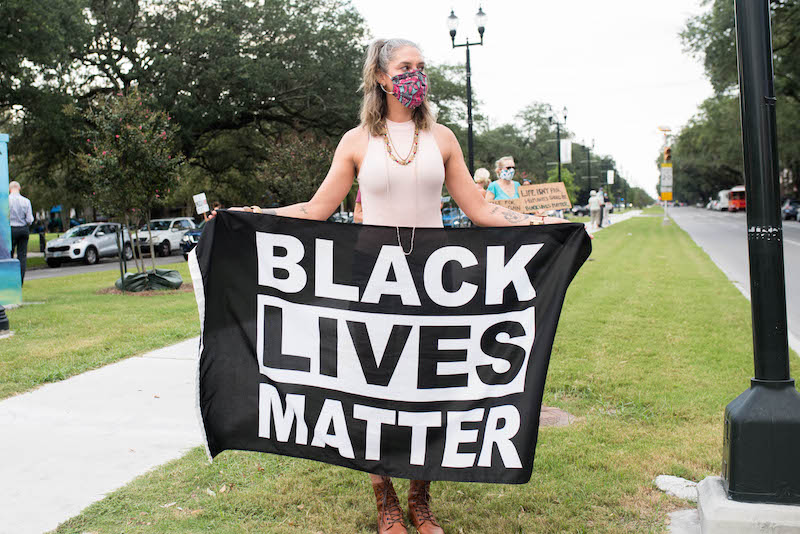 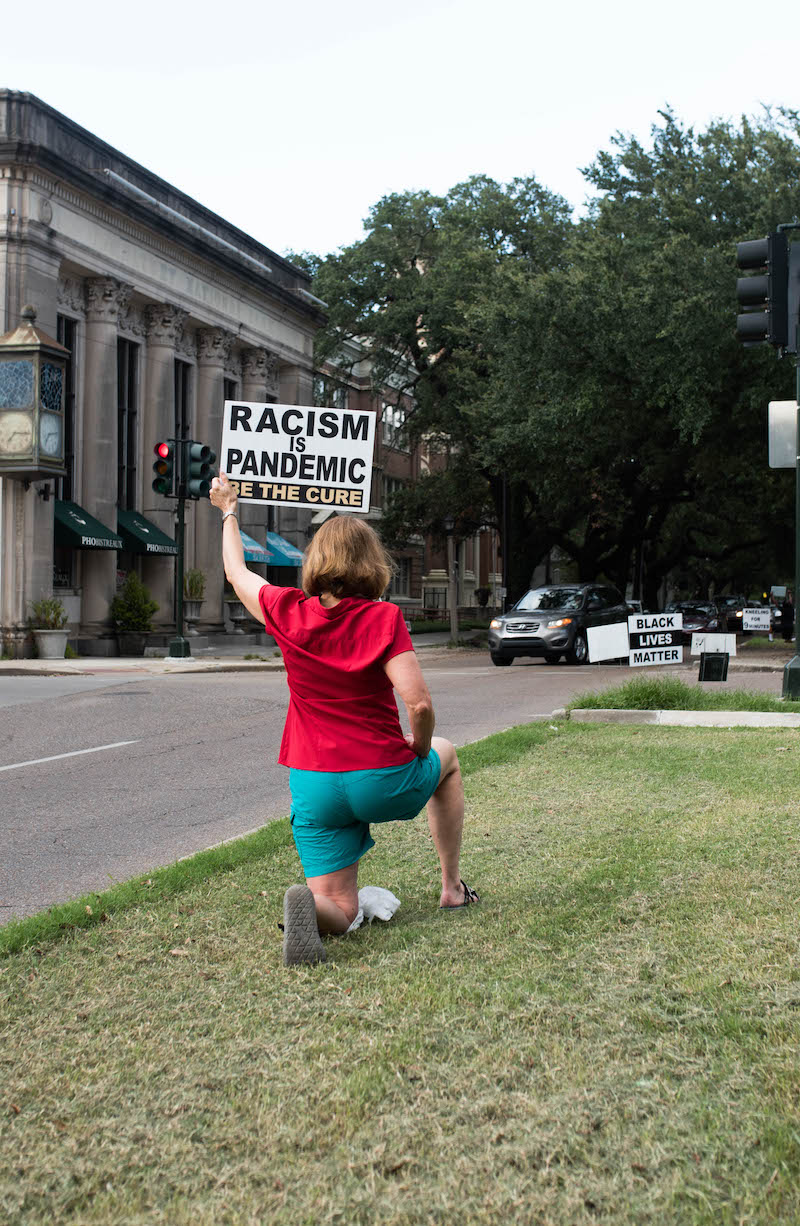 A neighborhood resident kneels in silence and holds a sign toward traffic on Carrollton Ave. 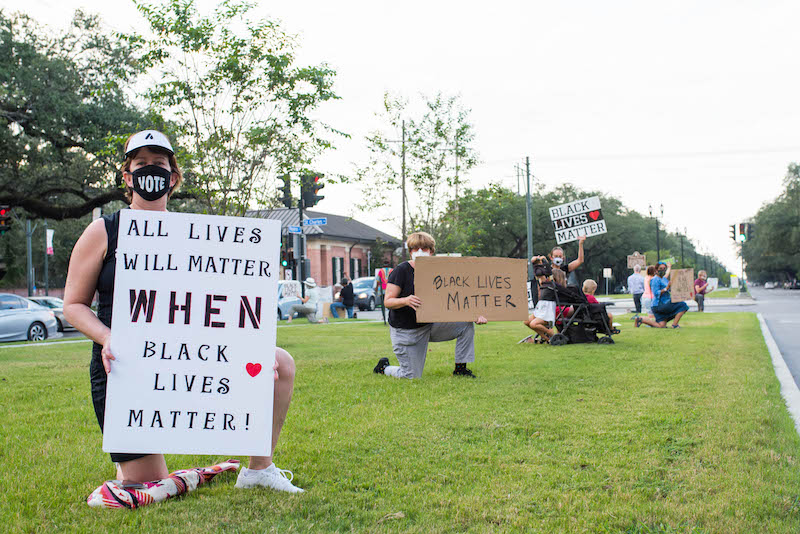 Angie Breidenstine kneels with others for 9 minutes near the corner of St. Charles Ave. and Napoleon Ave.