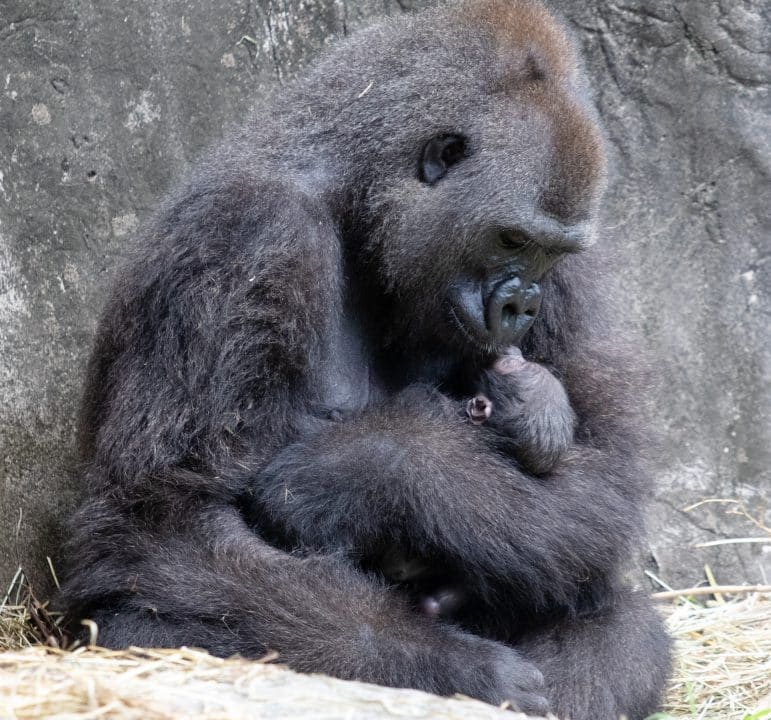 (courtesy of the Audubon Institute)

From the Audubon Institute

The Audubon family is devastated by the loss of a critically endangered western lowland gorilla born on Sept. 4. The 6-day-old infant was the first gorilla birth at Audubon Zoo in 24 years and the first offspring for 13-year-old Tumani.

Animal care staff noticed on Wednesday evening the gorilla infant seemed lethargic and weak in the arms of the mother. The infant was transferred to the zoo’s animal hospital, but the veterinarian team could not revive the infant. Tumani is currently being monitored by Audubon’s veterinary team and the entire troop was given the opportunity to grieve the loss of the infant.

Audubon took extra precautions leading up to the birth, working with Tumani on maternal training to prepare her to be comfortable with the possibility of staff assisting her with feeding or caring for the infant. To prevent undo stress on a new mother and to encourage necessary bonding time, animal care staff and veterinarians do not intervene unless absolutely necessary.

“There are many risks involved with gorilla births and, unfortunately, it is not unusual for a first-time gorilla mom to lose an offspring,” said Dr. MacLean, Audubon’s Senior Veterinarian. “Our veterinary team worked with outside medical experts on site including Species Survival Plan Gorilla Birth Management Team, OB-gyns and neonatologist to help us prepare and manage this birth.”

The cause of death is underdetermined at this time. Initially it appears that there was a lack of adequate lactation from Tumani to support the infant, but Audubon plans to perform a necropsy to determine cause of death. Results will be available in a few weeks.

“We are heartbroken over the loss,” said Ron Forman, Audubon Nature Institute President and CEO. “This has been a work in progress for many years, from the introduction of the new troop members to the announcement of the birth, everyone involved has worked tirelessly. I am incredibly proud of our team. We will continue to contribute to the conservation of this amazing species.”

Many gorilla populations have declined or disappeared over the past few decades. Western lowland gorillas have been assessed by the International Union for Conservation of Nature as critically endangered, with a population decline of more than 80%, mainly due to illegal hunting, disease, habitat loss, and an increase in poaching.

“It has been reported that in the wild 42% of western gorilla mortality rates happen in the first year of life,” said Audubon’s Executive Vice President and Chief Operating Office Dr. Kyle Burks.  “It’s very difficult to lose an animal in our care, but we understand the significance of this birth and the pivotal role Audubon and fellow AZA-accredited zoos play in saving this critically endangered species from extinction.”

The World of Primates section of Audubon Zoo will remain closed until further notice.

This is a profoundly hard time for the Audubon family and grief counseling will be available to our staff. The community is encouraged to share their condolences with the Audubon team on social media or to drop off sympathy cards at the front entrance of Audubon Zoo.