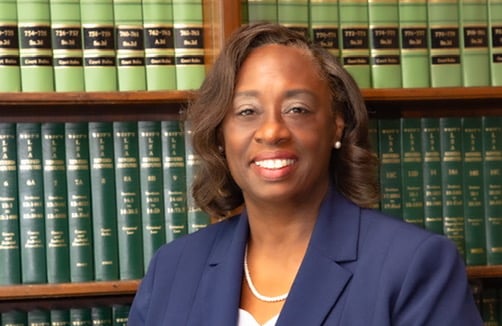 As she campaigns to become the second Black female and third Black jurist to serve on the Louisiana Supreme Court, Civil District Court Judge Piper Griffin, 58, credits the nurturing she received during her teen years at Xavier Prep for her courage and tenacity. “The nuns told me I could do anything if I put my mind to it, and I believed them,” said Judge Griffin.

Her first dream, however, was to become an astronaut. “I loved exploring and being exposed to different things,” she said. When Judge Griffin began college at the University of Notre Dame, she realized aerospace engineering was not her forte. “I still wanted to make a difference with people and decided that the law was one of the best ways I could do it.”

Judge Griffin received an undergraduate degree in government and was named one of Notre Dame’s 50 most distinguished Black graduates in 1997. She completed her legal studies at LSU’s Paul Hebert School of Law in 1987.

The Civil District Court’s third most senior member, Judge Griffin has served almost 20 years on the bench, including a stint as chief judge, and has chaired numerous judicial committees. She is also past president the Louisiana Judicial Council of the National Bar Association, a group comprised of Louisiana’s Black judges. Prior to beginning her judicial career, Judge Griffin spent 14 years specializing in casualty litigation with Camp Carmouche, Nalley & Dew and Leake & Andersson.

What drove Judge Griffin to seek elective office in 2001 is different from what now drives her. “Today I see the courts as increasingly under attack from being an independent but fair entity and balanced participant on our governmental system,” she said. “It is important that our courts uphold the will of the people in creating a system of quality before the law, as promised by the principles of democracy. I am driven to be that person who helps to ensure that our third branch of government lives up to its potential of being independent and fair.”

Judge Griffin wants to utilize her work ethic as a trial judge and as someone who has taken on leadership roles within the judicial system to help the Louisiana Supreme Court better manage the entire judicial system. “Retiring Justice Bernette Johnson leaves a high bar to meet as we elect a new Supreme Court representative for the 7th District. She has proven that justice is colorblind,” said Judge Griffin. “Yet at no time in our history has it been so important to have someone who can apply that principle fairly, with transparency and with equality for all.  My record is one of being fair and even-handed. The next Associate Justice must be prepared to add her voice to ensuring that all voices are heard.”

She is a former foster mother to a young man who is still a part of her life. “I will always be his mother,” Judge Griffin said. She has also mentored numerous Black lawyers and other young professionals. “I want to do for others what Xavier Prep did for me. I have spent time helping other women and minorities enter the legal profession and ensure fairness in creating and upholding the law, so that our society is ever improving in meeting its democratic promises,” she said. “We also have to ensure that there are opportunities for engagement by the Judicial Branch and the community and my career speaks to my attempt at doing just that. It is important that this perspective permeate this most important court in Louisiana and that that the next Associate Justice has shown qualities of leadership and engagement.”

Judge Griffin was one of a handful of Xavier Prep graduates who banded together to keep the school open after the Sisters of the Blessed Sacrament could no longer operate it. She is also president of the Crescent City Chapter of Links, a member of the United Way Agency Relations Committee and a board member of the Greater New Orleans YWCA and Catholic Charities.

“I was blessed by being raised in a religious home and attended primarily Catholic schools. My faith is the foundation of everything I do. It is a comfort, a guide and a roadmap for my success,” she said.  Judge Griffin and her family currently attend the Second Baptist Church, Sixth District.

Though Judge Griffin has qualified for the Louisiana Supreme Court she will remain on the Civil District Court Division I bench until December 31, 2020. “During COVID-19 we are working hard to function in such a way that people have access to justice,” explained Judge Griffin.  She is also learning to navigate the “new normal” style of campaigning. “When we plan things we have to plan with a lot of variables in mind. It’s hard to make a direct connection with voters,” she said.

In 2003, the Louis A. Martinet Society recognized her as a judicial pacesetter. Judge Griffin said she accepted the accolade because “I lifted the bar and did things in a way that other judges might want to emulate.”

Judge Griffin believes she has worked hard within the community attempting to understand and address day-to-day needs.  “When all voices are represented fairly on the Louisiana Supreme Court, we can’t go backwards. We will go forward,” she said. “That is what I am led by. That is what I hope voters want in their next Justice on the Louisiana Supreme Court.”

The Lower 9th Ward Voters Coalition and Engaging Voices and Voters will hold a virtual forum tonight at 6:30 p.m. until 8 p.m. in the First City Court judicial race. Interested citizens can participate via Facebook or Zoom.

Early voting continues until Aug. 8 from 8:30 a.m. until 6 p.m.  Aug. 11 is the deadline to request an absentee ballot by mail. The municipal general election is Aug. 15.