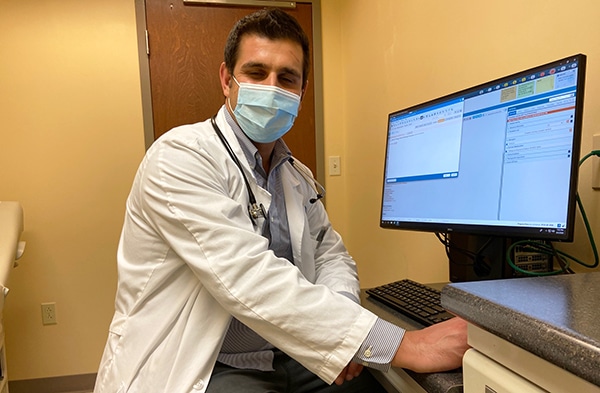 DePaul Community Health Centers, formerly known as Daughters of Charity Health Centers, are offering free COVID 19 and antibody tests at nine of their 10 locations in metro New Orleans.  DePaul is working in partnership with Louisiana Health Care Connections and Quest Diagnostics to test both symptomatic and asymptomatic individuals in under-served communities.

Though free PCR tests are offered at several locations across the city, DePaul is currently the only provider of free antibody testing. Because I might have contracted the virus before Mardi Gras, I signed up for the serology blood test at the DePaul Uptown campus, 3201 S. Carrollton Ave.  I had previously tested negative for the virus.

The health center’s attending physician, Dr. Frank Pascualin DePaula, provided clear and concise information about the antibody test and its benefits. “The test looks for antibodies in the blood to SARS-CoV-2, the virus that causes COVID 19. Many people who get COVID 19 never have symptoms or only have mild ones,” DePaula said.

Antibody testing is important, he continued, not only because it shows which people might be safe to go back to work versus those who are still at risk, it also helps experts learn more about the virus and how it spreads.

“The COVID-19 virus devastated our community, and DePaul Community Health Centers is proud to continue in our state’s efforts to combat the virus by offering testing for both symptomatic and asymptomatic individuals and antibody testing,” said Michael Griffin, president and CEO. “Knowing one’s status is key to curbing the effects of the virus. We are especially pleased to offer these services to our core patient population in under-served areas. Everyone is invited to visit our health centers for testing.”

ABSENTEE BALLOTS FOR JULY ELECTION NOW AVAILABLE FOR THOSE WHO QUALIFY

Working on an oil rig or going to the Gulf Coast beaches on July 11? You too can vote absentee.

With Louisiana’s presidential primary, a judicial race in First City Court and parish and state party elections rescheduled for July 11, voters who qualify for absentee ballots should be requesting them electronically through the Louisiana Secretary of State. The request can then be completed online or mailed, faxed or hand-delivered to the Orleans Parish Registrar of Voters, 1300 Perdido St.

Although the Louisiana Legislature refused to loosen absentee ballot eligibility this year, almost 700,000 Louisiana voters over the age of 65 already meet the criteria for mail-in voting.  Many other categories of voters can also request an absentee ballot if they will not be present on Election Day in the parish where they are registered.

In addition, registered voters who are incarcerated or hospitalized on Election Day and those involuntarily confined in a mental institution or sequestered as a juror are eligible to absentee vote. Disabled voters, overseas citizens, members of the military or registered voters who moved parishes within 30 days of an election also can vote by mail.

The Louisiana Secretary of State is notifying all voters over the age of 65 that they can participate in a mail-in ballot program. More than 300,000 senior voters received an informational letter in early April. It reminded seniors that in-person voting puts them at a higher health risk for COVID 19.  The remaining seniors should receive an updated letter within the next 10 days.  Several weeks ago, judicial candidate Marissa Hutabarat sent Orleans Parish seniors the application for voting by mail ballots.

According to CNN, Louisiana voters have picked the winning presidential candidate in every election from 1972 to 2004 and did so again in 2016 when they supported the candidacy of President Donald Trump. Louisiana will elect 61 delegates to attend the presidential conventions, in-person or virtual, in August, including 54 pledged delegates and seven super delegates.

Earlier this week voters in eight states and Washington, D.C., cast their ballots in person and by mail in congressional and presidential primaries — the first elections since the civil rights protests began during the pandemic and economic crisis. Voters in some states waited in long lines outdoors in the summer heat, competed with local curfews or had access only to a limited number of polling locations. Other states were flooded with mail-in ballots.

Though President Trump and other GOP leaders have frequently spoken out against mail-in ballot elections, it is the wave of the future. Hopefully, Louisiana will be onboard soon.

Though Louisiana does not carry the electoral college significance of Florida or Texas, New Orleans has landed on the short list of potential new sites for August’s Republican National Convention due in large part to U.S. Rep Steve Scalise’s relationship with President Trump. Having the convention here would be a tremendous signal that the region is again open for business.