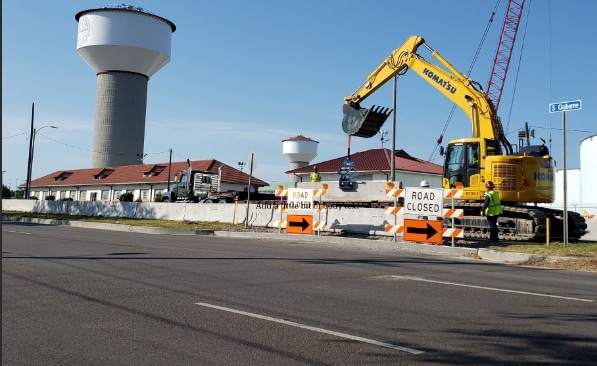 Construction for Phase 2 of the Water Hammer Hazard Mitigation Program begins outside the Carrollton Avenue. (Sewerage & Water Board photo)

The Sewerage & Water Board of New Orleans has begun a complete rehabilitation and upgrade of the Claiborne Avenue Pump Station, which houses four of eight water distribution pumps for the east bank of New Orleans.

Due to the pump station’s proximity to Claiborne Avenue, new valves and meters for the station must be installed in the existing right-of-way of the highway. Starting today (Thursday, May 14), the eastbound lanes of Claiborne Avenue will be reduced to two lanes and re-routed onto a temporary roadway built on the neutral ground.

Drivers are encouraged to heed all traffic directives, which will remain in place for the duration of the project. The estimated project completion date is July 2022.

The water pumps will be fitted with new motors that can operate at variable speeds – an upgrade that will allow them to adjust the rate of water flow to offset any pressure changes in the city’s network. This work is expected to greatly reduce the risk of damage from water hammer impacts — surges of water pressure sometimes caused by power loss at a water plant.

The work is part of of the Water Hammer Hazard Mitigation Program’s Phase 2, an approximately $35 million project. The cost of the water hammer project is being reimbursed through FEMA’s hazard mitigation program.

S&WB, with the federal financial support, launched this program to better protect the city’s drinking water system from power losses and pressure drops. The risk-reduction strategy is designed to also reduce the frequency of water main breaks and the need to issue precautionary boil-water advisories.

Phase 1 of the program included two new 200-foot water tanks that can hold approximately 2 million gallons of water each. In the event of a power loss to the water pumps, the towers can provide uninterrupted water pressure for approximately 40 minutes.

This provides extra time to transfer the pumps to another power source and not interrupt water service to the city. The towers, which became operational in 2018 and 2019, have prevented on several occasions the need to declare boil-water advisories, according to a S&WB press release.

The third and final phase of the project, which will include improvements to the Panola Pumping Station and High Lift Pumping Station, will go out for bid upon completion of Phase 2.