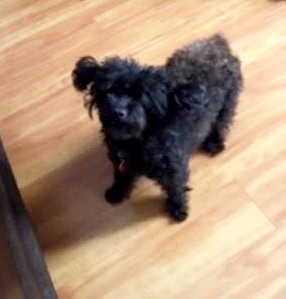 The New Orleans Police Department is requesting the public’s assistance in located a dog stolen on April 20.

At around 10:30 a.m., Coco, the pictured 9-year-old miniature poodle, was secured by her owner on a leash in the front yard of their home located in the 2200 block of Brainard Street, near Jackson Avenue.

Moments later, the owner’s neighbor informed her that a woman had taken the dog and ran off. The owner spent several days looking for Coco before informing police of the theft.

Coco is described as black with gray patches, weighs 6 pounds, and is missing her right canine tooth. She was wearing a pink collar with a rabies tag and had a black retractable leash. Coco is not microchipped.