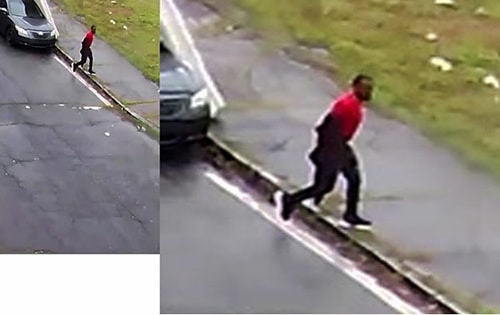 This man, caught on surveillance video, is sought for questioning in a Dec. 27 shooting death on Liberty Street. (via NOPD)

The NOPD continues to seek a person of interest in the investigation of a homicide that occurred on Dec. 27  in the 1500 block of South Liberty Street.

Detectives released a surveillance video showing the man believed to have information on the killing of Jermeny Marsh, 23. The video can be found here.

Police said Marsh was shot to death while sitting in his car just before noon two days after Christmas. Sixth District officers found him in the car on South Liberty and Terpsichore Street with multiple gunshot wounds. He was declared dead at the scene.

Anyone with information regarding this incident or the pictured person of interest is asked to contact NOPD Homicide Unit Detective Marylou Agustin at 504-658-5300, or to call anonymously to Crimestoppers of Greater New Orleans at 504-822-1111 or toll-free at 877-903-STOP.