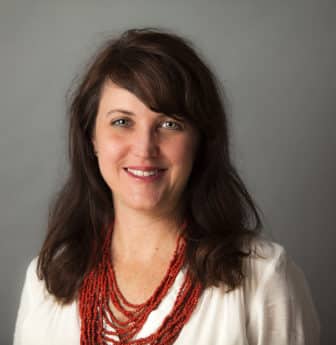 To the untrained eye, it looks like organized chaos. The lunchroom in Booker T. Washington High School, once filled with students, is now populated with HandsOn New Orleans volunteers in constant motion — packing meals into plastic bags, that are placed into boxes, which when filled are placed into cars to go to low-income housebound seniors and people who have medical disabilities.

I became a part of that scene seven weeks ago when I signed up to volunteer with the organization. Like many people during the COVID-19 pandemic, I had time on my hands and knew this would be a productive way to help the community. It also got me out of the house and into a social setting with people. I love my cats, but they aren’t the best conversationalists.

During my days as the Times-Picayune society editor, I covered galas, most of which benefited nonprofits. Attending these events or donating money is a wonderful way to support an organization, but I rarely, if ever got into the trenches with a group.

It was now time to change that.

In an article posted on Uptown Messenger, I read that HandsOn New Orleans needed volunteers. What drew me into the group was it addresses food insecurity in the community, a constant problem in New Orleans. 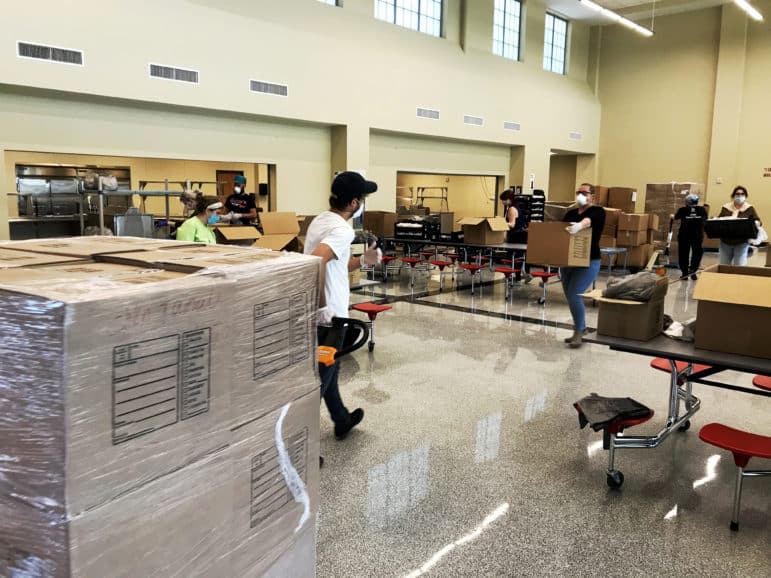 The organization arrived in the city after Hurricane Katrina and the levee failures in 2005 to help with the recovery. It is an affiliate of the Points of Light Global Network, the world’s largest nonprofit volunteer center organization.

HandsOn Executive Director Chris Cameron said the organization had started planning its response “when the first COVID-19 case in Louisiana was identified” in early March.

A major focus was supplying meals, working with the city to identify those in need.

According to NOLA Ready: “We connected members of the City’s Special Needs Registry to the HandsOn meal delivery service. Those are individuals who have medical, mobility, or access needs and who may need food while sheltering in place during the ‘Stay Home’ order and Phase One.”

For this effort, they teamed up with World Central Kitchen, founded by chef Jose Andres, which provides the meals via Revolution Foods, a company that makes healthy school meals. Through its #ChefsForAmerica program, World Central Kitchen has local restaurants using their staff, who are getting paid, to make meals, though this is still a small portion of the total amount distributed.

I started April 2, two weeks after HandsOn had begun making deliveries on Mondays and Thursdays. 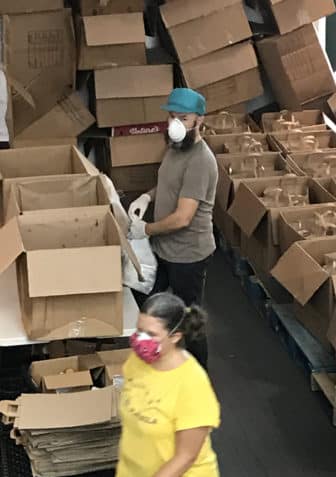 HandsOn required volunteers to wear masks and gloves throughout the process. For my mask, I asked my friend Rick Viana, whose sewing skills were perfected making his costumes as a member of the Krewe of the Rolling Elvi, for one. Disposable gloves at that time were hard to come by, so I didn’t have those.

Thankfully, HandsOn has disposable masks and gloves on site, so that’s where I got my gloves, as well as the disposable mask the day my cloth mask was itching my face to the point of distraction. (Lesson learned: After a washing homemade cloth mask, be sure to use a lint roller on the side touching your face.)

The volunteer orientation for meal delivery was outside the New Orleans Culinary and Hospitality Institute, where HandsOn initially set up the meal delivery preparation and distribution. Before you got there, they sent a detailed instruction sheet on how to safely make socially distant deliveries.

After orientation, I got my list — including name, address, how many meals and contact phone number — to deliver to 10 households. While I overheard one of the HandsOn officiants say to another volunteer that lists weren’t in any particular order, I found mine was, starting in Gentilly and moving to New Orleans East.

This first time, volunteers could grab already-made meal kits, or create their own, which was a little confusing and time-consuming. I grabbed a bunch of the pre-made meals and off I went.

The drop-offs were easy, except for one thing: even with my Map app and addresses, many times homes or buildings did not have a number or a number clearly visible. This is a problem if a drop off is on a busy street like Chef Menteur Highway. 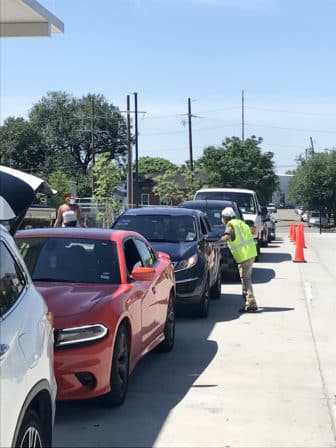 We were told to call before delivery to let the resident know that we were arriving, then when dropping off, keep 6 feet distance between us. One of my deliveries was to a disabled person, so I followed the instructions on the list and left it on the doorknob.

The houses and apartment complexes where I dropped off meals were tidy and well cared for. Much of New Orleans East and Gentilly flooded during massive levee failures in 2005, so I also wondered what homes were new and what ones were renovated.

Driving around also gave me a strong moment of clarity that my preconceived notions of poverty — such as a residence had to look rundown — and its relation food insecurity were wrong.

The following week I was supposed to deliver meals, but by the time I got there, all the lists were handed out and I segued into cleanup: NOCHI required that the space be left the way it was before they set up and then sanitized.

Subsequent weeks I have done meal preparation, with the location moved to Booker T. Washington High School, which gives the organization more room to do meal prep and store supplies and also is easier for meal pickup. The meals were now being taken out to the cars instead of coming in to pack and pick up. It is a more efficient system.

Meal prep has its own rhythm – and everyone has a different method of packing the meals into bags, a challenge when some of the meals are larger than others.

Everyone is masked and has gloves on, and it’s fun when you notice a friend or acquaintance underneath their mask. I have run into bartenders, Junior League sustainers and arts organization staff members.

HandsOn is committed to do these home deliveries until the end of June. 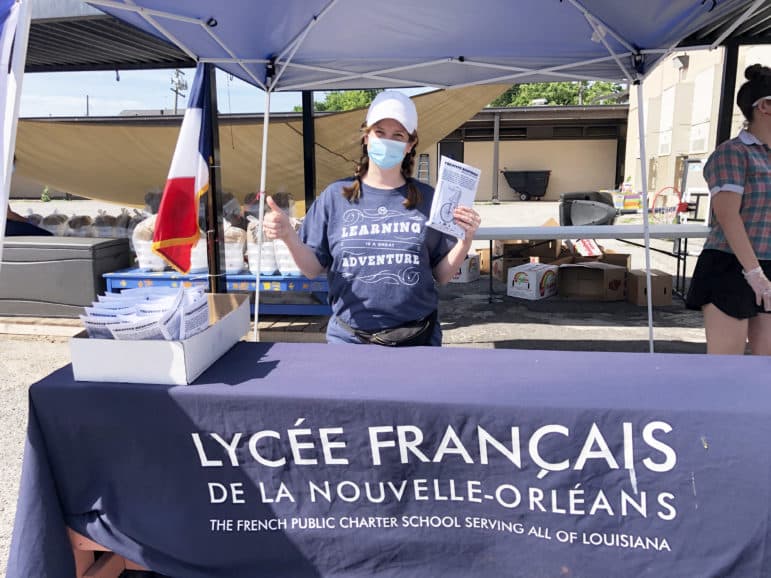 A week or so later after I started volunteering for HandsOn, I was applying for an artist grant through Creative Response, an organization founded to support the city’s arts community during the pandemic. I saw that they were handing out art kits to schools and I emailed the organization to see if they needed any help.

I thought these art kits are a great way to bring art to students who are being home-schooled and need an outlet to let their minds wonder, be creative, relax. 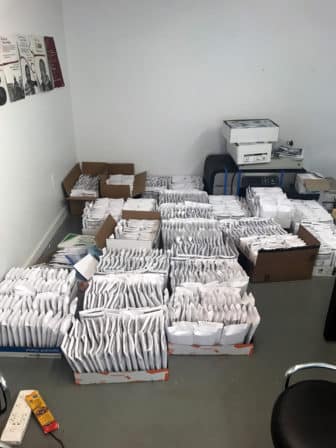 I received an email from Amelia Broussard, Antenna’s gallery director, to be at Print Machine, the print shop that is an Antenna project, for Wednesday morning. Broussard is also one of the coordinators of the art kits and their distribution.

I lucked out with a sunny spring day as I headed to Paper Machine, the building hard to miss with its bright, abstractly painted exterior, just on the border of the Lower 9th Ward and St. Bernard Parish.

Like HandsOn, the organization requires volunteers to wear masks and gloves, and had gloves on hand if you didn’t have any (I didn’t.) My first assignment was to distribute art kits at Idea Oscar Dunn School in New Orleans East. The art kits are handed out to 18 charter and public elementary and high schools in Orleans Parish.

It was an easy drive from the Lower 9, through St. Bernard Parish, going past Rocky and Carlos (open for take-out) and back into Orleans Parish where the remains of Six Flags New Orleans peeked out from above the trees.

Driving on Paris Road was also a reminder of coastal erosion and climate change as the bayous and waterways looked like they were about to overtake property and the road.

When I arrived, they had a table for me to set up the art kits before I handed them out while the school distributed meals to parents. Like HandsOn, there is a rhythm to it: cars pull up, the school staff gathers how many meals are needed, I ask how many kits they want, and we hand them off to the mothers, fathers or grandparents.

I ran out of kits pretty fast, and in subsequent weeks the amount I brought to the school was increased. I was also beginning to recognize a few of the drivers, some of whom related to me how much their children liked the kits. 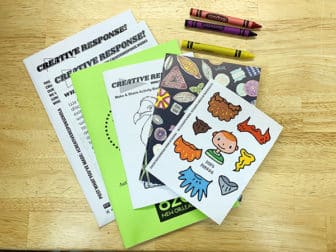 Creative Response started handing out kits on April 1, with each week filled with different items: Some can have crayons, chalk or colored pencils, others have watercolors or craft items like pom poms.

It is a mix of donated and purchased supplies. There is always some sort of coloring book and a poster, with art created by a local artist who is paid for their work. “We wanted to be able to support artists in the community,” said Broussard.

The art kits will be handed out through June.

Both HandsOn and Creative Response hope to continue their programming in some sort of way past June. Whether they can remains to be seen. But until then, they know they have volunteers ready to back them up.

Note from NOLA Ready: If you know seniors and vulnerable residents tell them they can call 311 to be connected to food options.

Freelance writer Sue Strachan is a regular contributor to NOLA Messenger. She can be reached at suestrachan16@gmail.com.