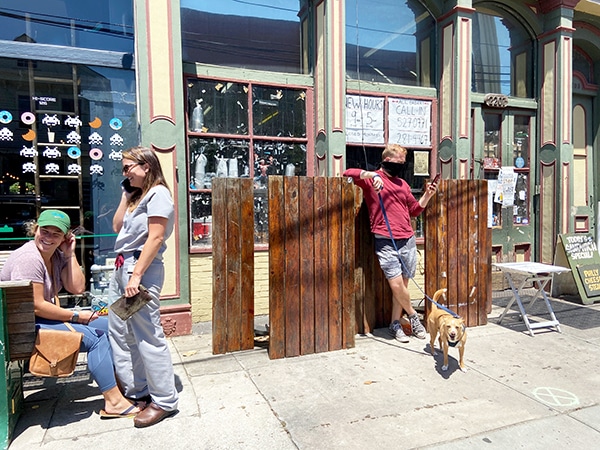 Who among us wouldn’t want to be eating with friends at a neighborhood restaurant, shopping at a favorite boutique or getting ready for Jazz Fest? Unfortunately we can only dream about those luxuries right now. Ms. Corona is holding us back as a region, a nation and globally. She won’t be letting go until we have a vaccine.

As the owner of several small businesses, I want to open up New Orleans just as much as anyone.  I need customers. However, I am willing to wait a little longer for the health of my customers and the community. I want to be alive to attend Jazz Fest next year.

Nearly 60% of Americans fear reopening the country too early, according to a new Wall Street Journal/NBC poll.  Nearly three-quarters of the 900 registered voters questioned were concerned about a family member or themselves catching the virus.

More than 60% were also disappointed with the federal government’s efforts to ensure sufficient testing was available to determine how far the virus has spread. Only about 30% said they were more worried about waiting too long to reopen.

We need more testing, more contact tracing and more information about what drug therapies will work to save us from the virus. Unfortunately, all three will take time.

Cabin fever is everywhere. We took a drive yesterday out to Jefferson Parish just to sightsee. Some people were wearing masks. Except for the unusually long car lines at Chick-fil-A, I couldn’t really tell there was a stay-at-home order in place. The streets and many parking lots were packed with vehicles. Life seems pretty normal — but it’s not.

When Gov. John Bel Edwards and Mayor LaToya Cantrell lift the stay-at-home orders, each one of us will have to decide just how much risk we are willing to take.

My utility meters are located inside my building. When the Entergy meter reader showed up last Friday, he was not wearing a mask or gloves. “Where is your personal protection equipment?” I asked. “In the car,” he responded. “It’s too hot to wear them.” That young man is selfishly taking a risk that could endanger other people.

Ms. Corona knows no state or parish boundaries. She doesn’t care how old you are or if you never get sick. Like a thief in the night, she’ll take your breath away and make you wish you had stayed home more. The faster we reopen New Orleans without adequate testing and contract tracing, the quicker that nasty Ms. Corona will re-emerge. At least for right now, no steak dinner, new shoes or jazz concert is worth dying for.

More than 2.6 million guns were sold in the U.S. during March, an 85% increase over the same period last year. Hand guns, rather than long guns, account for the majority of guns being purchased by first-time gun buyers. Blueprints for digital guns that can be made out of plastic using 3-D printers are also available.

Today 76% of gun owners state self-protection as their primary motivation for gun ownership, up from 20% in the 1970s. Many Americans are also buying guns during the pandemic because of fear of looting, violence and government’s capacity to deal with the crisis, according to Carlton University researcher Noah Schwartz.

The SCD is a laser-aiming device that is mounted on the pistol’s barrel. “By using the shooting hand to stabilize the gun and the non-shooting hand to direct the laser, it becomes easier to hit your target,” said Estrada, an attorney at Baker Donelson.

The attachment was designed to fit on a Ruger Mark IV 40107, which has low recoil. It could be adapted for other guns under the patent application Estrada filed in February on behalf of Michael Weinberger, a retired New Orleans attorney and home-defense advocate.

“We took a really simple idea and addressed a real need. We’ve seen a lot of interest in this product from individuals who have hand, strength or grip issues,” she said.

Though the NOPD reported a decrease in arrests since Mayor Cantrell’s stay-at-home order was issued last month, crimes are still occurring. Citywide, crime will spiral once again when the stay-at-home order is lifted.  The NOPD is currently conducting seat-belt checks, perhaps as a way to stay in touch with citizens or to generate a little income for the department.

The NOPD and other first-responders have also been hit by the virus. We need all back at work to keep us safe.

3 thoughts on “Viewpoint: Victory from COVID-19 is still months away”