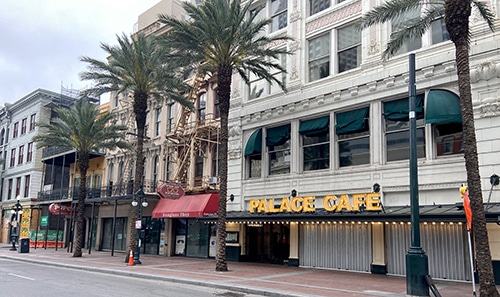 The Palace Cafe is among the many businesses closed on Canal Street. Some locations are boarded up like they were after Hurricane Katrina. (Danae Columbus)

While some New Orleanians will soon begin receiving the much-heralded extra $600 unemployment benefits and other stimulus checks Congress authorized in response to the global pandemic, many self-employed and Form 1099 contract workers — including those in the short-term rental industry — received rejection letters from the Louisiana Workforce Commission.

Still other eligible workers who were not able to apply online are encountering long wait times to speak with a staffer. “I haven’t been able to work in three weeks,” said one small business owner. “If I didn’t have a small nest egg, I don’t know how I would feed my family,” she said.

Though the CARES Act states that self-employed and contract workers are eligible for unemployment, thousands of Louisiana workers have been caught in the cross-hairs between conflicting state and federal laws and available funding.

Applicants who have been rejected are being urged to appeal and continue to file each week they are unemployed or when work hours have been reduced. The state hopes to pay all claims when they are able to qualify a worker’s eligibility under the U.S. Department of Labor guidelines.

Like other segments of the hospitality industry, demand for short-term rentals has evaporated. Platforms such as AirBnB, which has thousands of listings in metro New Orleans, are offering guests 100% refunds on all bookings through May 31. Though some hosts have opened their properties to emergency workers, many others are too fearful of the virus to take the risk.

“We have more than 8,000 full- and part-time employees in New Orleans’ short-term rental workforce, and all are on the outside waiting their turn for government relief,” said Eric Bay, head of the industry group Alliance For Neighborhood Prosperity.

A manager of several STR properties across the city, Bay is concerned about his six part-time employees. “I can’t keep my 1099 workers paid without an SBA loan,” he said, “and they can’t get unemployment because of system delays.”

Bay was unable to qualify for an SBA-backed Personal Payroll Protection loan because he applied as an individual and not a business. According to Treasury Secretary Steve Mnuchin, $98 billion for small businesses has already been approved. An additional $250 billion is under discussion.

It will take several months before government funding trickles down to everyone who deserves it. U.S. Rep. Cedric Richmond, D-New Orleans, is among the many voices urging the federal government to move more quickly.

In the meantime hard-pressed New Orleans families are relying on resources such as Second Harvest Food Bank and Troy Duhon’s Giving Hope Food Pantry or are picking up essentials from giveaways hosted by City Council members Jay Bsnks, Kristin Palmer, Cindy Nguyen and others. Numerous groups have also sprung up to feed hospitality industry workers.

In these troubled times please consider a donation to help feed a New Orleans family in need. 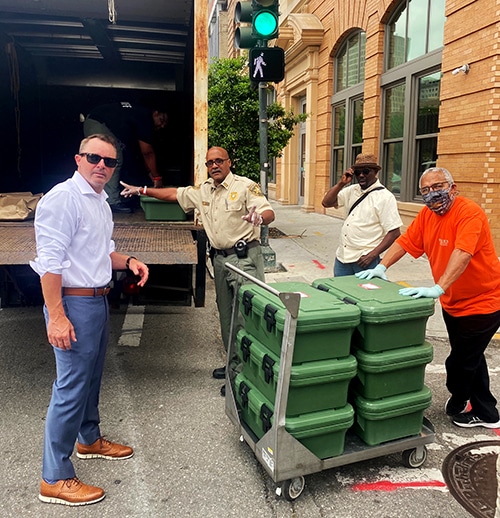 Orleans Parish Sheriff’s Office deputies load meals at the Pythian Market on April 8 to feed their emergency responders and key staff. The food was prepared by Willie Mae’s Scotch House and underwritten by the Association of Louisiana Bail Underwriters. (Danae Columbus)

Two hundred medical staff and key employees of the Orleans Justice Center enjoyed a meal of Willie Mae’s award-winning fried chicken and all the trimmings yesterday, courtesy of Willie Mae’s Scotch House and the Association of Louisiana Bail Underwriters.

“We want to take care of those individuals who are providing care and services for our most vulnerable during this time,” said Steve Adams, bail association executive.

“We didn’t think twice about helping feed those who are on the frontlines of the COVID-19 crisis,” said Willie Mae’s owner Kerri Seaton Stewart. “We are here to acknowledge that their hard work is not going unrecognized.”

Though the Orleans Parish jail population has decreased dramatically in recent years due to criminal justice reform, close to 1,000 individuals are currently incarcerated. Many are considered too violent to release.