Surveillance video taken April 2 at 1:53 a.m. in the bike shop on South Carrollton Avenue. (via NOPD)

The NOPD is seeking the public’s assistance in identifying and locating the pictured suspect in a burglary incident that occurred early Thursday (April 2) morning.

The suspect is described as either white or Hispanic with tattoos on the top of both hands and a thin “chin-strap” beard. He was also wearing a Nike “Just Do It” backpack during the burglary.

Anyone with information on the identity or location of the pictured subject is asked to contact Second District detectives at 504-658-6020, or call anonymously to Crimestoppers at 504-822-1111 or toll-free at 877-903-STOP. 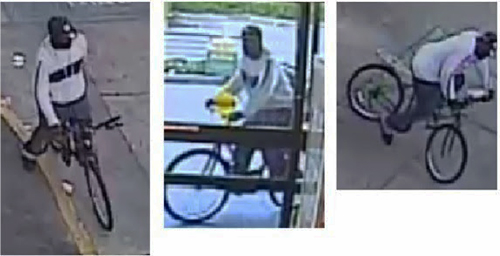 The NOPD is also asking the public’s assistance is identifying and locating a suspect in a March 24 theft incident.

At around 7:30 a.m., video surveillance shows a man arriving on bicycle to the parking lot of Walgreens in the 3200 block of Magazine Street. He rode around the parking lot before taking a box containing various toiletries delivered to the store and then fleeing on his bicycle.

The subject is described as black male with a dark complexion. He stands about 5-foot-10 and weighs 210 pounds. He was wearing a white hoodie with dark lines, blue jeans and a camouflage baseball hat.

Anyone with information regarding the identity and/or location of the pictured subject is asked to contact Sixth District detectives at 504-658-6060, or call anonymously to Crimestoppers at 504-822-1111 or toll-free at 877-903-STOP.