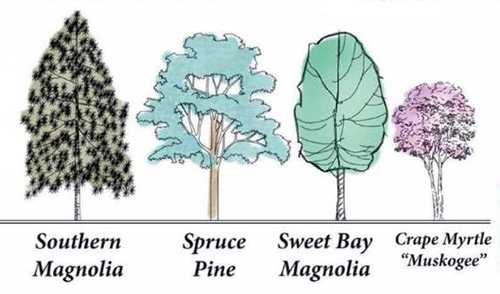 The southern magnolia grows to about 40 feet, the sweet bay 30 feet, the spruce pine 25 feet and crape myrtile about 20. (via the Army Corps of Engineers)

South Claiborne Avenue is getting an upgrade, with both drainage and beautification in mind, near the Carrollton, Leonidas and Fontainebleau neighborhoods.

The U.S. Army Corps of Engineers has begun planting trees on the neutral ground for the restoration project replacing the green infrastructure removed for the construction of underground drainage improvements.

The restoration is part of the corps’ Southeast Louisiana Flood Control Project, a $2 billion set of infrastructure improvements meant to reduce the risk of flooding in the event of heavy rain. 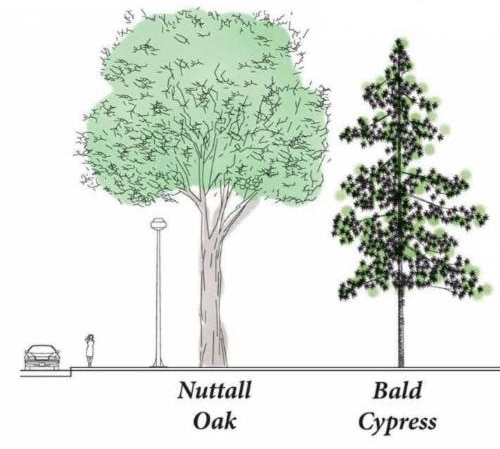 The nuttall oak grows to about 60 feet and the bald cypress about 50 feet. (via Army Corps of Engineers)

In addition, select areas will receive bio-retention features incorporating a drainage soil layer, allowing stormwater to permeate and be stored for uptake by trees and other vegetation.

Development of the design plans were coordinated in partnership with the Louisiana State Historic Preservation Office, the Coastal Restoration Authority Board, the Sewerage & Water Board, Parks and Parkways, and the Louisiana State Department of Transportation and Development and with consideration of the city’s “Plan for the 21st Century” and input collected from the public.

The $1.4 million contract was recently awarded to Tarpon Construction, the same company that did the greenspace restoration on the Napoleon Avenue neutral ground. Work is expected to last three to six months.

The contractor will be allowed to close only the left travel lane, adjacent to the neutral ground, on Claiborne during construction, officials said during a public presentation in October 2019.