Board of Zoning Adjustments members discuss the parking plan with applicant Dameon Job, lower left, and staff member Emily Hernandez, lower right. The hearing was held as a video conference.

The Board of Zoning Adjustments on Monday approved a long-debated parking plan for a rebuilt Walter L. Cohen College Prep high school campus. The campus will have more parking spots than the School Board originally proposed, but the plan falls short of the amount lobbied for by the school’s neighbors in the Delachaise area.

The high school operated by the New Orleans College Prep charter school network is set to redeveloped into a 103,000-square-foot three-story building with 35 classrooms that could accommodate about 600 students and 75 faculty and staff members. The school currently on the site will be demolished.

Such a campus, according to the city’s Comprehensive Zoning Ordinance, needs 145 off-street parking spaces.

The new campus at 3520 Dryades St. was designed with 40 off-street parking spaces, to allow plenty of green space for athletic fields. So the School Board applied for a variance.

At a March 9 BZA meeting, the architects were sent back to the drawing board with a request to draw up alternative plans and to allow for 75 parking spaces.

Neighbors have objected to the parking plan, both the original plan for 40 spots and the compromise proposed by the BZA, saying the configuration would result in a parking overflow in front of their homes that could damage lawns, congest streets and generally impair quality of life, according to comments at a  Neighborhood Participation Project meeting in December on the redevelopment.

For decades, school officials have pointed out, Cohen has functioned with only 25 off-street parking spots. The school has served as many as 500 students, they said, although the number has fallen to about 250 in recent years.

The BZA staff looked at parking for other public secondary schools in historic residential neighborhoods. Not a single school follows the CZO standards. Sophie B. Wright at 1426 Napoleon Ave., with about 500 students, for example, has a 130-space requirement and 26 actual off-street spots.

“The BZA staff has provided how other schools have handled these variances, but that information does not include how well those variances have actually served the community,” she stated. “Rather than base this on what other schools have done, let’s opt instead to create the right outcome for the school and neighborhood.”

Diboll, like other speakers at Monday’s virtual hearing, provided written testimony read into the record by a BZA staff member. The board, BZA staff and the applicants attended the meeting from their homes via video-conferencing technology.

All of the speakers providing the written testimony live near the Cohen campus. Two, both executives with New Orleans College Prep, testified in support of the variance.

“I’ve lived in the neighborhood for over 10 years,” said Jonathan Tebeleff, the charter network’s chief financial officer who also coaches sports at Cohen, “and other than during Mardi Gras I’ve never had a problem parking on my street.”

Nine speakers disagreed, and the general consensus among the opponents was that the campus needs 105 off-street parking spaces.

“This decision will affect our growing neighborhood’s quality of life for decades to come,” said Gen. Taylor Street resident Helene Barnett. “Every required parking space is crucial to the health of our neighborhood.”

The BZA staff analyzed parking in the area, surveying 88 properties — singles, doubles and multi-family — on the surrounding streets. They found that 56 percent of surveyed residential properties do not have access to any off-street parking,

“While this number may appear high, it is not uncommon within the city’s historic urban neighborhoods,” the report states.

Most schools in historic neighborhoods use some street parking, the report notes, and the staff members counted about 73 parking spaces near the campus.

Some speakers backed a staff suggestion that the architects alter the design to allow parking under the structure, to avoid taking away from green space used for recreational sports and physical education. A school in the same charter network, Lawrence D. Crocker College Prep at 2301 Marengo St., did just that with a raised gymnasium. 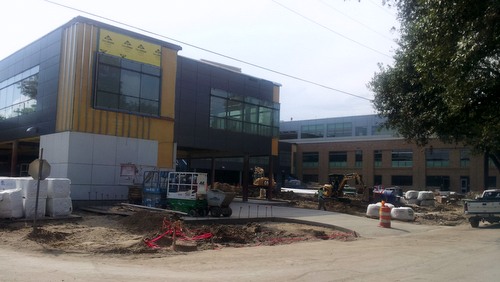 “That was cost prohibitive,” said Dameon Job, speaking for the Orleans Parish School Board and the Recovery School District. “Raising the building would cost $2.1 million. We would rather spend the money on educational features for the school.”

Cohen’s new building is part of the a FEMA-funded RSD initiative to build 80 new school facilities now operated in conjunction with the OPSB.

A suggestion to build a parking garage was also dismissed as a “non-starter” because of the price tag. Zoning decisions, however, can’t be based on the applicant’s budget or spending preferences, noted a board member and one of the opponents.

“This is not a justification, even for a public body such as the School Board,” stated Justin B. Schmidt, a land-use attorney who testified as a neighborhood resident rather than as paid counsel. “If this were a private institution, it would not even be considered.”

Job also noted safety concerns with a raised gymnasium, saying it would increase the number of entrances and stairwells, making it harder for staff and security guards to monitor the school.

For some board members, the decision came down to green space versus asphalt, the football team’s ability to practice on the site and finding the right area for buses to drop off and pick up students.

“My biggest concern at the end of the day is that this is an educational facility,” said BZA member Todd James. “I want to make sure that we are keeping those kids safe, and find the most effective way to truly accommodate their needs.

“I’m a big proponent for physical fitness in all schools. We are arguing over a handful of parking spaces that, at the end of the day, take away from these kids and the pure purpose of their education.”

The Board of Zoning Adjustments voted to approve a plan that allows off-street parking for 65 vehicles, waiving 80 of the required spaces.

One BZA member, Candice Richards Forest, recused herself. All other members voted yea.