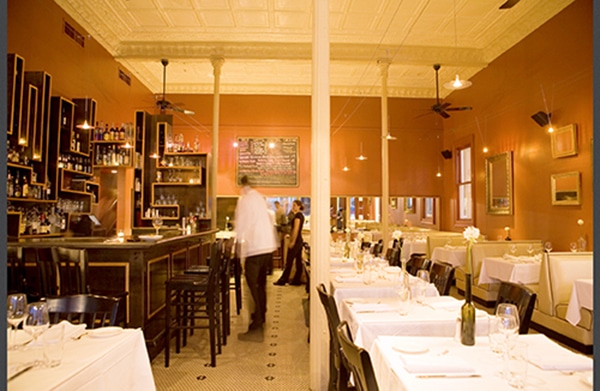 Lilette, like many other Uptown restaurants, has continued a limited operation with take-out sales. (Eugenia Uhl photo)

For Part 2 of this two-part series on Magazine Street, Uptown Messenger takes a snapshot of restaurants, bars and coffee shops in the wake of the coronavirus pandemic. (Part 1 focused on local shops and galleries.)

Along Magazine Street, a gastronome can sample French, Indian, Vietnamese, Cajun, Creole, Chinese and homegrown flavors in myriad restaurants that dot the six-mile stretch. Bars, an important part of New Orleans social life and culture, can be temples of cocktail culture or beloved neighborhood hangouts. Coffee shops offer places to relax, visit, study or work and have their own individual vibes.

Along with the mix of retail stores, these businesses have made Magazine Street a popular destination for tourists and locals.

While many restaurants and coffee shops have pivoted to selling to-go orders, delivery and curbside service, bars have had to close entirely, with no revenue coming in.

The income loss has also been significant for restaurants. A National Restaurant Association survey of 6,500 restaurant operators found a 78% average drop in sales during the first week of April, compared with the same period last year.

About 95% of the establishments on Magazine are considered small businesses, according to the Magazine Street Merchants Association. While the CARES Act has allowed them to apply for Small Business Administration loans, the results have been mixed, and for this article, as with Part 1, businesses have declined to say whether they obtained a loan or not.

Restaurant employees and bartenders have been able to apply for grants ranging from $500 to $1,000. (See the end of this article for details on resources.)

‘We decided to close’

LeBlanc + Smith – the company that owns Cavan and Barrel Proof on Magazine Street, as well as Sylvain, Meaux Bar and Longway Tavern in the French Quarter – considered closing their businesses due to the pandemic before the mayor and governor issued their orders.

“Many people don’t understand how vulnerable restaurant workers are,” said Kristen Casey, LeBlanc + Smith’s director of marketing. “They are touching dirty plates and glasses, and don’t do it wearing gloves.

“We had a lot of conversations about putting our staff and guests at risk,” she said. “As tough at it was, we decided to close all of our properties.”

When the restaurants and bars closed, the company started focusing on getting funds to employees. Casey credits Ali Grieb, the director of talent and management, for researching unemployment compensation and grants, as well as finding documentation needed to apply. She also relayed information about homeowners’ and renters’ rights.

Another way LeBlanc + Smith is supporting employees is via gift card purchases. Seventy-five percent of sales go to staff.

“We were able to raise quite a bit so far,” said Casey. “We believe the gift cards help our staff now and later, encouraging people to come back and use them.”

As the stay-at-home order continues, the company is now considering doing take-out.

Casey said that the restaurants were not set up to do mainly take-out. They also believed that the dining experience not only included good food — it embraced people gathering together to enjoy it.

It is these experiences that the LeBlanc + Smith managers hope to continue. “LeBlanc + Smith started in a post-Katrina world,” Casey said, “and we are up to the challenge and ready to make this happen, now and when safe to do so.”

‘We are going to reopen’ 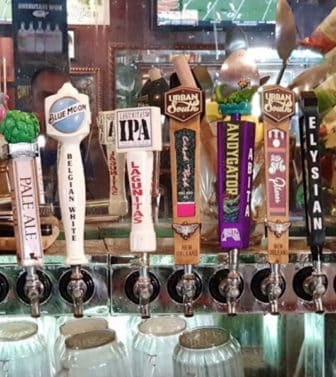 The taps at Rendezvous Tavern. (via therendezvoustavern.com)

The Rendezvous Tavern is the quintessential neighborhood bar where bartenders know your name — and if not, they know your drink. Like other bars in the city, the Rendezvous ceased operations during the pandemic.

No money is coming in, but that still means there are bills to pay: water, electricity and the DirectTV bill, as well as the sales tax for the early part of March and renewing the liquor license.

“We go in three times a week to clean up, perform any maintenance,” said Keswani, about the building they are paying the mortgage on.

They want to be ready when businesses are allowed to open up again.

“Our bartenders are amazing,” said Keswani. “We have been in touch with them and we are going reopen and move forward.” 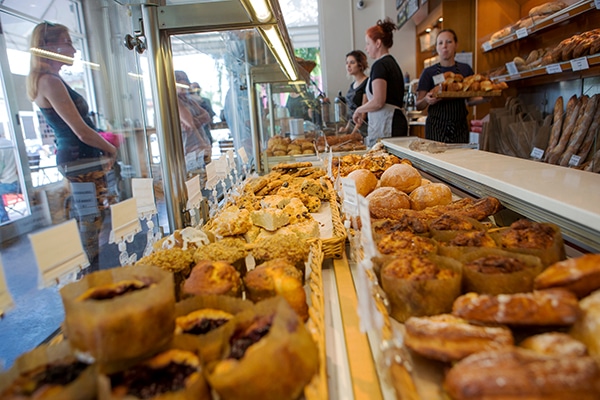 “Being able to support our staff by providing employment and offering a sense of normalcy for our community is important to all of us,” said chef Donald Link of the Link Restaurant Group, which includes Herbsaint, Cochon, Cochon Butcher, Calcasieu, Peche Seafood Grill, Gianna Restaurant and Uptown’s La Boulangerie.

Since the stay-at-home order, Link Restaurant Group has been feeding staff members and hospitality workers Monday, Wednesday and Fridays at Cochon.

Also offering take-out is Lilette. Chef John Harris, who owns the restaurant along with Bouligny Tavern next door, has said the take-out is driving sales that had decreased since the start of the stay-at-home order. The limited menu includes favorites such as grilled hanger steak and roasted poulet breast. Dessert, wine and beer are also for sale.

“If this is our new business model,” said Harris, “We will adapt. We are not going to fold up shop.”

Owners have been forced into painful decisions about laying off employees. The National Restaurant Association found that 88% of restaurant operators nationwide say they have laid off or furloughed employees since the beginning of March. On average, these operators cut 83% of their restaurant’s total staff, with 41% of the restaurants laying off or furloughing all of their workers.

At Lilette, Harris has tried to pay employees what they made before this all happened with the goal of retaining staff and helping them pay their bills.

With Bouligny Tavern, he had to eventually lay off staff, or some volunteered to take time off. He is using this time to do renovations to the building and is paying some of the Bouligny employees to do some of the work.

“Hopefully we are going to hit the ground running,” he said about when the city allows bars to reopen.

Hieu Doan, co-owner of Boil Seafood House on Magazine Street, has embraced the take-out model, with phone and online orders from the website. They are offering the full seafood menu, including boiled crawfish when available.

Doan, however, has also experienced a side of the pandemic many other businesses have not: He had to temporarily close Namese in Mid-City earlier due to the loss of business because people associated the restaurant’s Vietnamese cuisine with Asia and the pandemic.

Doan said the company had to lay off 85% of its employees. 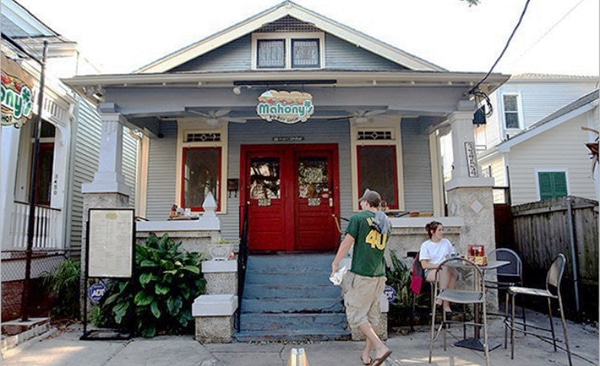 ‘We are going to create our future today’

While Mahoney’s Po-Boy and Seafood Restaurant is adjusting its business model to online orders, take-out with curbside pickup, it is also adding philanthropy to the mix.

Glen Armantrout, president of JMH Hospitality, the parent company of the restaurant located on Magazine Street and the French Quarter, said that the company had already been involved with giving back to the community, such as donations to charitable events.

Loaves of Love is the new initiative that Mahoney’s has teamed up with Leidenheimer Baking Co., Blue Plate Mayonnaise, Chisesi Brothers and hospitality industry partners to help feed health care workers and first-responders.

There are two ways to participate. One is to order a 24-count tray of Mahoney’s po-boys, and Mahoney’s will match the purchase tray-for-tray. The other is to make a direct online donation to Loaves of Love via the Louisiana Hospitality Association, and Mahoney’s will sponsor a group in your honor or your choice.

“We have already done 100 trays,” said Armantrout. “Our goal is to hit 1,000 trays.” Tulane Medical Center, Touro Infirmary, Ochsner Medical Center and New Orleans Juvenile Justice Center have all had trays delivered to them.

The pop-up is at Mahoney’s in the French Quarter, with preorder and drive-through pickup only. It takes place during what would have been Jazz Fest weekends — this Friday (April 24) to Sunday (April 26) and May 1 to May 3.

Po-boy cravings can be fulfilled at Mahoney’s on Magazine Street, with curbside pickup through D’Livery NOLA or UberEats. There is a limited menu also includes daily Blue Plate specials, classic New Orleans dishes such as red beans and rice, and salads, including grilled shrimp and avocado.

Like many other businesses, they have had to furlough most of their employees. “We are doing 20% of normal business on Magazine Street,” said Armantrout, “which was what we were already doing in take-out. But there is no new revenue.”

Moving forward and thinking positive are at the forefront. “We are going to create our future today,” said Armantrout. 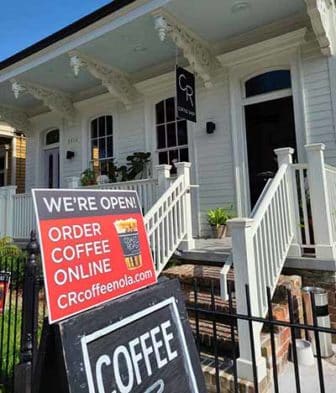 Coffee shops are places to study, gather for meetings, work, pass the time quietly, or to stop by to get a cup of coffee on the way to work.

While Coast Roast Coffee Shop is one of the newer coffee shops on Magazine Street, it already had a following from its other locations in the St. Roch and Auction House markets.

Owner Kevin Pedeaux has been in the coffee wholesale and roasting business for 12 years, only recently jumping into the coffee shop business.

Magazine Street is currently Coast Roast’s only freestanding location, and where Pedeaux is focusing his attention because the two markets are closed until management reopens them.

At the store he is offering coffee, tea, Nonna Randazzo cookies, assorted bakery items, and hand sanitizer by Seven Three Distilling Company. He is also selling a lot of retail coffee, such as 5-pound bags. People can order online and pick up, or show up and order to-go. There are marks on the ground for social distancing. Pedeaux is also doing home deliveries.

What is boosting Coast Roast is the local clientele.

“I say every day we have gained three to four customers, it’s looking better,” said Pedeaux, who is also enthused about getting to know his local customers better.

Another boost is that he is working with the Krewe of Red Beans’ Feed the Frontline and the SVHC (Scott, Vicknair, Hair & Checki) Law Firm to provide coffee to hospital workers.

The other initiative started after Pedeaux and Coast Roast staff noticed a large number of health care workers coming in for coffee and put out a call to cover the cost of their caffeinated refreshment. According to SVHC Law Firm social media, lawyers Galen Hair, Lauren Checki and Joey LaHatte stepped up, and the firm is now providing coffee to the Veterans Affairs hospital until COVID-19 is over.

Pedeaux varies the delivery times so different shifts can benefit. “This has been a huge saving grace,” said Pedeaux,“and covers rent and put more people back in place at the coffee shop.”

Pedeaux had to lay off his 12 staff members, but is now up to five, including him. “It was personally a huge victory to get back to 7 a.m. to 7 p.m. hours,” he added.

• The Louisiana Hospitality Foundation launched the South Louisiana Bar Owner Relief Fund to support small businesses, specifically bars located in South Louisiana, with the financial effects of the COVID-19 pandemic. For information, to donate or to apply for relief go to the LHF website.
• The U.S. Bartenders Guild’s Bartender Emergency Assistance Program is run by the guild’s foundation. Bartenders, their spouses and children of bartenders can apply. Apply online.
• The New Orleans Business Alliance set up a dedicated relief fund to meet the needs of the gig economy workers, including rideshare drivers, musicians, arena workers and festival production staff. Apply online or call the NOBA office at 504-934-4500.
• Louisiana Restaurant Association’s website provides a number of resources, including a link to the United Way of Southeast Louisiana Hospitality Cares Pandemic Fund.
• The Greater New Orleans Foundation Service and Hospitality Family Program, funded by New Orleans Saints and Pelicans owner Gayle Benson and McIlenney Company, makers of Tabasco, has reached its current capacity of 1,000 applicants.

The South Louisiana Bar Owner Relief Fund was added to this story on April 24.