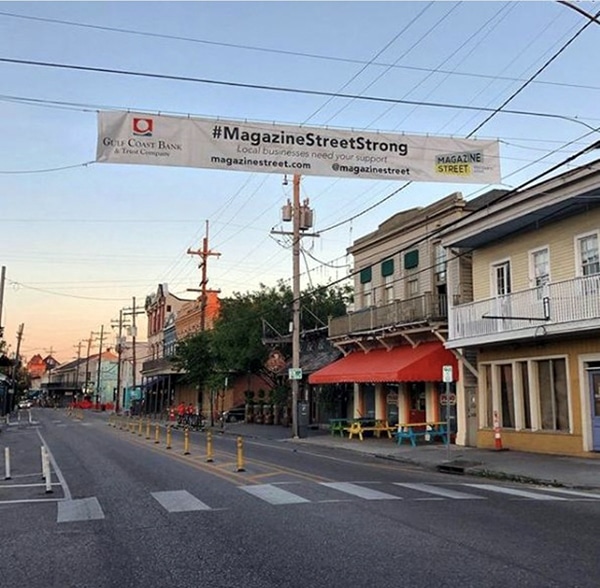 For Part 1 of  this two-part series on Magazine Street, Uptown Messenger is focusing on retail businesses in the wake of the coronavirus pandemic. Part 2 will focus on restaurants, bars and coffee shops. The following is a snapshot of local shops and galleries.

The six-mile Uptown stretch of Magazine Street is home to approximately 300 businesses, creating a hub for tourists and locals to enjoy shopping, dining and cocktails.

Depending on the type of business, some owners pivoted to a new business model: one with restricted contact with customers, but allowed them to stay open with restricted hours and social distance rules, or by virtual appointments and online transactions.

With limited business, however, this also meant hard decisions — including whether to lay off employees — had to be made.

Approximately 95 percent of the establishments on the street are considered small businesses, according to the Magazine Street Merchants Association. While the CARES Act has allowed them to apply for Small Business Administration loans, the results have been mixed, and for this article, retailers declined to say whether they obtained a loan or not.

For retailers, a mix of online — website, virtual and social media — as well as established personal connections have been what is pushing them forward and helping them stay positive and busy.

‘This is high season for art selling’ 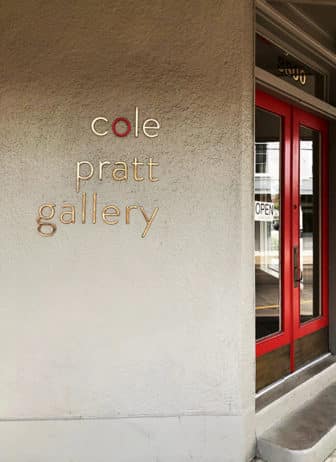 Erika Olinger, owner of Cole Pratt Gallery, already had a website (coleprattgallery.com) when the self-quarantine began. In addition, “I have used Instagram and email marketing,” said Olinger. She also is “old school” when advertising her gallery shows: she sends out postcards.

Olinger has been at the gallery since 1994 and bought it in October 2008. Among the artists she represents are Mac Ball, Maurice Alvarado, Shawn Hall, Laurel Porcari, and Stephen Strickland, whose show opened March 31. Its opening reception, planned for April 4, was of course canceled. The work, however, is up in the gallery and can be viewed from the window or by appointment.

In addition to the online business, Olinger is taking appointments and goes to the gallery during the week to get work done — it’s easier than at home, she admits. Some people see her in the gallery and want to come in. Olinger uses social distancing practices when this happens, she said.

As with other retailers, sales are down. “This is high season for art selling because of festivals, weddings, and tourists,” she said.

But she is still getting sales, and she has even found new customers.

“I will say the people who have been purchasing art, for the most part, are not doing it as a ‘sympathy buy,’” said Olinger. “They have want something pretty to look at, but it is also a way to support a local business and artist.”

‘There is an itch’ to shop

The urge to buy something, anything, seems to be percolating even after the local stay-at-home order moved to May 16.

Bonnie Wilson and Roz Ditta, co-owners of Weinstein’s, were in the store this past Saturday fulfilling orders. The business partners and their staff, who have not been laid off, have stayed in touch with customers via email, text, and phone calls. “Mostly phone calls,” said Wilson.

Before the stay-at-home order, the website (weinsteinsinc.com) was getting some orders through the store or via FarFetch, an online luxury fashion retail platform that sells products from more than 700 boutiques and brands from around the world.

But it is the personal touch and the select clothing lines, such as Dries Van Noten, Rick Owens, R13, Jil Sander and Khaite, that keeps the customers coming back to Weinstein’s. The store has been in business since 1971, with 19 years on Magazine Street.

As the self-quarantine goes on, people want to shop. “There is an itch,” said Wilson.

“We are hearing more from customers,” said Ditta. “We shipped out a ton of items last week. Some ask we deliver to them.” They are also open by appointment with one of the team present.

As fashion is cyclical, the store is selling spring lines, with fall orders arriving in September. “We are hopeful,” said Wilson about the company’s future.

‘We continue to work on future projects’ 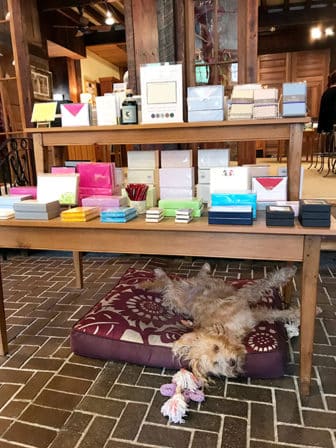 The Scriptura store is having sleepy days, but the letterpress studio is still filling orders. (courtesy of Scriptura)

At Scriptura, the first two weeks after the stay-at-home order required the staff to print change-the-date mailers for weddings and other events. Owners Sallie Mykris, Margaret Jones and David Isganitis still go in to work to answer phones and emails, while the graphics and print staff are on call when needed.

“We continue to work on future projects,” said Jones in an email. “Our letterpress studio remains operational and printing three days a week.”

They are also using this time to make improvements on the old machines and on the exterior of the building. Social media, emails, and their website (scriptura.com) are links to their new and old customers — Scriptura opened its doors in 1995. Currently, there is a 20 percent discount on items in the shop section of the website (code: extracredit).

Peggy Stafford, owner of Stafford Tile & Stone, has pivoted more to virtual appointments with clients, which she had already been doing with out-of-town clients.

The basic outline of a virtual appointment is that the client sends the salesperson photos of what they like and a description. The salesperson can then pull the tiles and do a FaceTime or Zoom meeting to present them. If the client wants to see more, the salesperson will do a walk through the showroom live-videoing the stock. A detailed PowerPoint of the project can act as a document for the client, designer, architect and tile setter.

Stafford, who has been in business in New Orleans for 20 years, also sees this as the way of the future.

“This is going to be good training for my sales team to continue to operate,” said Stafford. “I have a feeling we are going to have to work this way in some capacity in the future.

“This pandemic is pushing the consumer into different place, and I think people were already moving in that direction anyway. Because of this, it might be happening sooner.”

Stafford just had the website revamped, and the company’s Facebook and Instagram are interactive ways to entice clients during a period that is seeing slower sales.

‘We are all in this together’

“We are all in this together,” said Grace Kaynor, co-owner of Sotre, the home accessories, linens and gift store that just marked its fifth anniversary in December.

Kaynor is worried about the cancellation of the festivals and overall lack of tourists. And while she has a great local clientele, “most of our business is directed by the tourism industry.”

Sotre has always had some form of online retail, but after the self-quarantine it took on a greater importance.

Online shopping has expanded, and through April 30, the store is offering an automatic 20 percent discount on all products, with an additional 5 per cent sent to Feedthefrontlinenola.org to support local restaurants, provide jobs and send meals to health care professionals. There is free delivery of local items.

Other ways to promote the store is via the website’s blog, which shares Kaynor’s thoughts and highlights various products. The store has also taken to Instagram with frequent postings of products, and Kaynor and associate Nancy Rhett taking turns doing Instagram videos featuring items, such as bedding, available at the store.

Kaynor has also made this a mission to save small businesses on the street: she started a GoFundMe page, “Help Save Small Business on Historic Magazine Street,” to raise funds for small local retail stores with one storefront.

The site states: “Sotre has an online presence but many shops are unable even to process online orders and with no way to generate income, cash reserves are quickly disappearing. Most of these businesses have received, to date, no funding from SBA or the CARES act. With bills coming due and with staff laid off, most of the stores are struggling to survive.”

Kaynor is positive about the GoFundMe page, hoping it will attract donations to help save the street’s mix of small businesses.

The GoFundMe page is not part of the Magazine Street Merchants Association, which is an umbrella organization uniting businesses on the street. On May 2, the association is hosting a “Virtual Champagne Stroll on Magazine Street” presented by Gulf Coast Bank and Trust Co., from 5 to 9 p.m. This year would have been the event’s 10th anniversary, and in the past it brought heavy traffic to the street and provided a boost in sales for businesses. 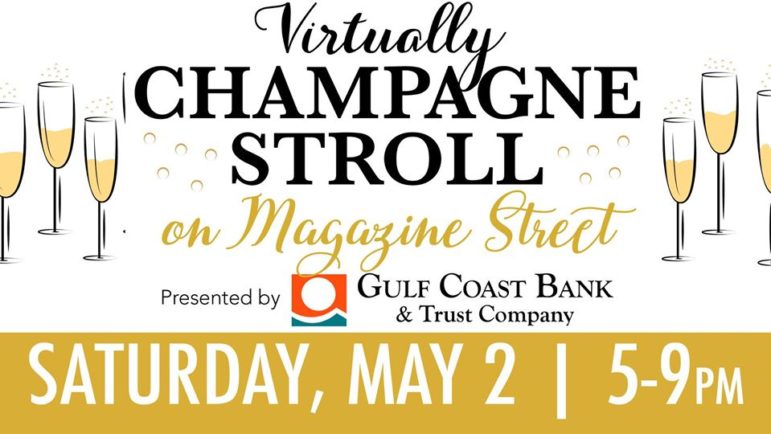 Because of social distancing, the association is bringing the party onto Instagram: @MagazineStreet. The association is hosting an interactive live video feed where followers can add comments supporting Magazine Street. Users worldwide can check out which stores and shops are offering discounts and deals, and what restaurants are selling takeout food or drinks. There will also be special giveaways and door prizes to viewers and shoppers on the Facebook page, @MagazineStreet.

It is also a push for Mother’s Day, and May 2 allows gift givers at least a week to have the purchase shipped, if needed.

“Right now we have 30 participants and by next week we are hoping for 50,” said Lindsay Adler, managing director of the association. (To find out list of participating stores and restaurants, go to www.magazinestreet.com.)

“I have seen a live music stream, but haven’t seen an online shopping one before!” said Adler.

The association has also posted banners, courtesy of a board member, stating #MagazineStreetStrong.

In addition to the Champagne Stroll, magazinestreet.com is a resource of what stores and shops are open online or have pivoted in a different way; what restaurants are offering take-out or curbside pickup; and virtual offerings, such as seminars. Those featured are members of the association, so there is a chance you might not see your favorite business on the site.

Next: Part 2: How restaurants, bars and coffee shops on Magazine Street are doing.

4 thoughts on “How are Magazine Street businesses doing? (Part 1 of 2)”