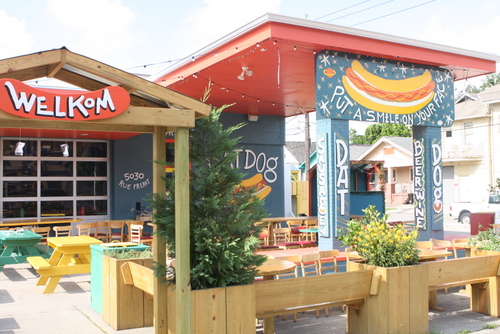 Dat Dog, "an absolute screaming success" that outgrew its original space on Freret Street within a year, helped reassure people that Freret was safe, Brott said. "When they opened, none of us had ever seen the foot traffic and the eyes on the street just from that little hot dog stand," Brott said. (Robert Morris, UptownMessenger.com) 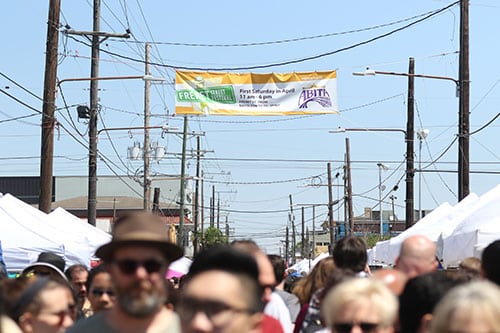 Crowds packed Freret Street from curb to curb at the 2016 Freret Street Festival. Bars and restaurants on the corridor depended on the festival to get them through the summer.  (Zach Brien, Uptown Messenger file photo)

Signs for the Freret Street Festival have hung over the Freret business corridor for weeks. It’s the trademark spring event of the popular strip that runs from Tulane and Loyola universities to Napoleon Avenue.

The 2020 festival, originally scheduled for April 4, has gone the way of Jazz Fest and other events — postponed to a date yet to be determined. “It was a big boost,” Mojo Coffee House owner Angela Estevez said of the festival. “A lot of businesses, I think, that helps them get through the summer.”

In the years after Hurricane Katrina, Freret Street saw an influx of investment, with shuttered banks and gas stations transformed into restaurants, bars and coffee shops bringing new business to the area. In the throes of the coronavirus pandemic, the street, like the rest of the city, has come to a near standstill.

“Things are exceptionally bad,” said Neal Bodenheimer, owner of Cure and Val’s, a Mexican inspired restaurant that was slated to opened this spring.

Cure has a full bar license and, per the state decree, has ceased operations entirely. Bodenheimer has begun auctioning off his personal whiskey collection to raise money to support his restaurants and employees.

Bars with kitchens, like Cure on Freret Street, are not allowed to sell take-out or delivery under the COVID-19 restrictions. (Google Maps)

Music venue Gasa Gasa, also closed due to COVID-19, has taken some of its events virtual and is selling T-shirts through Nola Relief.

Under the closure orders, restaurants are still allowed to operate take-out and delivery food service and sell alcoholic beverages. High Hat Cafe, Dat Dog and Mojo Coffee House are among those still operating, but the decline in sales has been steep.

Dat Dog sold only 20 hot dogs on April 9, according to CEO Paul Tuennerman. “That would have [sold in] a good 30 minutes in normal times,” Tuennerman said.

None of those interviewed were able to retain their full staff. Some have furloughed employees; some have laid them off altogether.

Freret Street has a unique dependency on the education system, now shut down for the rest of the school year. Estevez said much of the area’s business comes from the universities and surrounding schools, including Lusher Charter School, Samuel J. Green Charter School, Academy of the Sacred Heart, and the Math and Science Academy. In fact, Estevez picked Freret Street to open the second location of Mojo because it was close to her children’s school.

At the same time, Freret Street is not dependent on tourism in the way the French Quarter and other neighborhoods are. It’s a commercial strip embedded in a residential neighborhood, and much of its clientele is local.

In a time when travel can cause viral transmission and is discouraged, Bodenheimer, who also owns French Quarter restaurant Cane and Table, believes this will allow Freret Street to more easily bounce back than other tourist-heavy parts of New Orleans.

Estevez worries about what that comeback will look like. A Texas native, Estevez has been in New Orleans for more than 20 years. She saw New Orleans change after Hurricane Katrina as many of those who left did not come back, taxes increased, Airbnb arrived, and the culture changed.

“After Katrina, everybody shopped local,” Estevez said. “If that doesn’t happen after this, that’s going to be really scary, if people don’t understand the importance of shopping local.”

Shopping local was cited by all the owners as one of the best means of reviving the New Orleans economy when the time comes to reopen. Even before the coronavirus arrived, Estvez said, the  Starbucks that opened on the corner of Freret and Jefferson Avenue had already funneled away some of her business.

Some business owners have taken the pause of this pandemic to work on improving their restaurants in ways they couldn’t when it was full of customers. Estevez said her team has improved their use of online organization and communication tools.

High Hat Cafe owner Chip Apperson said they are making aesthetic improvements in the restaurant. Apperson described them as things on his to-do list that he wished he didn’t have time to get to.

There are ways for locals to help, and not all are monetary. Yes, the business owners said, it helps to order take-out, buy gift-cards, over-tip and donate to virtual tip jars. Restaurants are also places of community, and the owners said they miss their community. They appreciate messages of encouragement and appreciation, such as the customers who reach out to check on their favorite bartender, server or barista.

In addition, Bodenheimer said, people can contact their local, state and national representatives and tell them how important small business is to the city and that they need to support them.

They all emphasized a commitment to socially distancing as crucial.

The owners all echo the rest of the nation in their uncertainty. When will the economy reopen? What will it look like when it does? And how can people in their industry make money in the meantime? Nobody has the answers. However, there was certainty in their faith in New Orleans.

“Aren’t we the comeback kids?” Tuennerman said. According to business owners, the answer on Freret Street is a resounding yes.