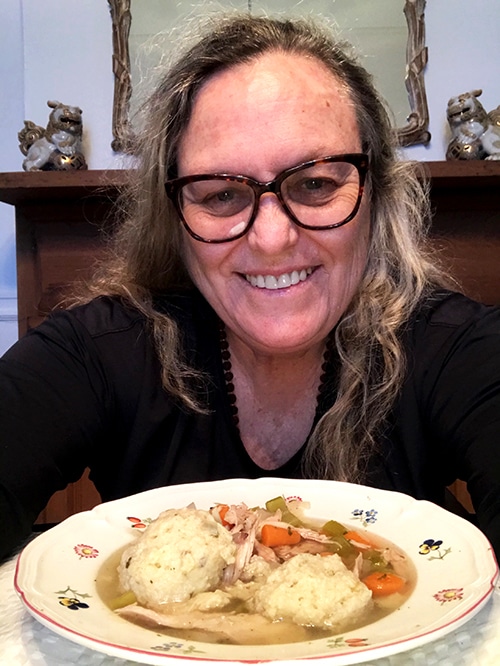 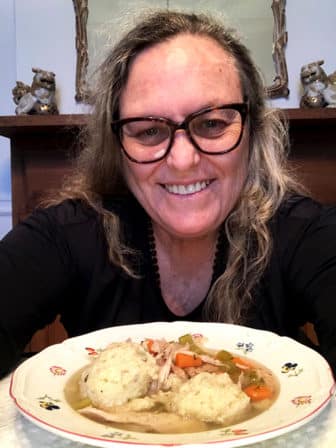 When 61-year-old Lori Golden Freehling entered the Winn-Dixie on Tchoupitoulas Street on Wednesday morning, a store worker handed her a piece of paper that said “Random Act of Kindness” on it.

She assumed it was some kind of promotion to show appreciation for store employees. But when she checked out her groceries, the cashier asked her, “Do you know who Tyler Perry is?”

Golden Freehling said of course – Tyler Perry is the multimillionaire creator of the mega-hit “Madea” movie franchise, and a New Orleans native.

“She looked at me with this big smile and said, ‘Well, he just bought your groceries,’” Freehling said.

Freehling wasn’t the only person to benefit from the star’s generosity. According to a report on WWL-TV, the filmmaker paid for groceries at every Winn-Dixie in Louisiana, plus 44 Kroger stores in the Atlanta area.

The free groceries were available during the time of day when the chains were only open to senior and other high-risk shoppers, a safety measure to help prevent the spread of COVID-19.

Freehling, a retired educator and volunteer for the Red Cross, was feeling deeply anxious about going out in public even for a quick grocery trip. Due to her husband’s medical issues, the couple has been self-isolating for a full month. Her husband hasn’t left the house since March 8, and she only goes out every 10 days or so for essentials like food and medicine.

“I didn’t sleep well the night before because I was anxious to go into the market, even though I was wearing the mask,” she said.

However, she needed ingredients for matzo ball soup to make for that night’s Passover Seder. She didn’t want to order groceries to be dropped off at her house, as she felt that would just put a delivery person at risk, so she went out early to buy the groceries herself. The surprise gift moved Freehling to tears.

As she was driving home, however, she realized that she was fortunate enough to not really need someone else to pick up her grocery tab. So, she “paid it forward” instead by donating the cost of her groceries to the Second Harvest Food Bank. 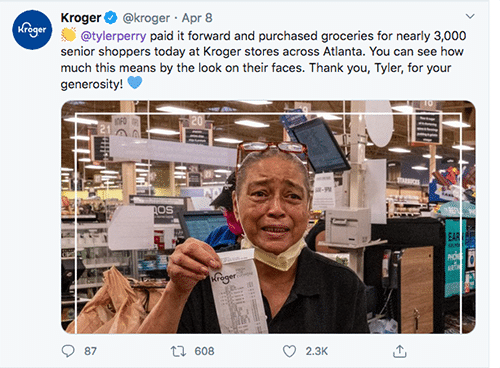 The official Kroger Twitter account noted the incident on Wednesday: “@tylerperry paid it forward and purchased groceries for nearly 3,000 senior shoppers today at Kroger stores across Atlanta. You can see how much this means by the look on their faces. Thank you, Tyler, for your generosity!”

However, Perry made no mention of the donation on his own social media accounts. Instead, he posted a tribute to a member of his crew, hairstylist Charles Gregory, who passed away from coronavirus. He also asked African-Americans to take the virus particularly seriously.

Seventy percent of Louisianans who have died from coronavirus were black, Gov. John Bel Edwards said on Tuesday, even though only around a third of the state’s population is black.

“Black people, we are at a disproportionately higher risk of dying from this virus. Please, please, please, I beg you to take this seriously,” Perry wrote. “You have to socially distance yourself. That means stop hanging out, stop congregating, stop doing anything that will put not only your life in danger but also the lives of so many others.”

Golden Freehling said the whole incident made her reflect on the Jewish term “mishpachah,” which means family.

“That’s a wonderful quality here in New Orleans, because of its inherent community love and love of life, even in tragedy,” she said.