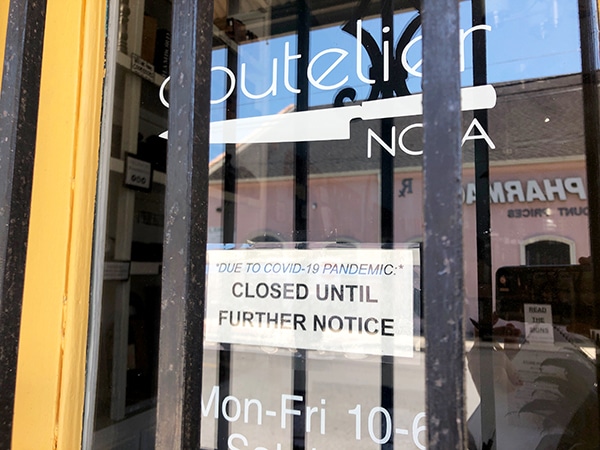 Along Oak Street, from Carrollton Avenue to the river, the toll of the coronavirus pandemic is clear: at least 13 stores and restaurants have signs announcing their storefronts are closed due to the virus. But for the businesses that have held on so far, the initial panic has worn off, and there’s hope that they’ll make it to the other end of this crisis.

“I’ve learned you’ve just got to adapt. You’ve got to be so flexible,” said Chamain O’Mahony, co-owner of the bakery Breads On Oak.

O’Mahony had to shut down her bakery’s downtown location, as foot traffic there has essentially disappeared, but she’s still doing take-out Thursday through Sunday on Oak Street. It took some time for her to adjust emotionally to not having a bustling dining room full of customers.

“It was such a community event with everybody hanging out,” she said. “So when we lost that, it was like wow, we just lost our whole community.”

But business has slowly been trickling back to “a steady stream,” and O’Mahony said she feels much better now as she realized her customers haven’t left her.

“You get used to the new normal,” she said.

“I think we’re going to be OK, but I have the feeling this isn’t going to end sometime soon,” she said.

A month and a half into the city and state shut-down orders, her little shop is tenaciously holding on with take-out orders and curbside retail pickup. She’s noticed an uptick in customers since the federal government began giving out the $1,200 relief checks.

“People have been coming in, especially since the stimulus,” she said. “I’ve seen more people buying board games–before it was just a trickle.” 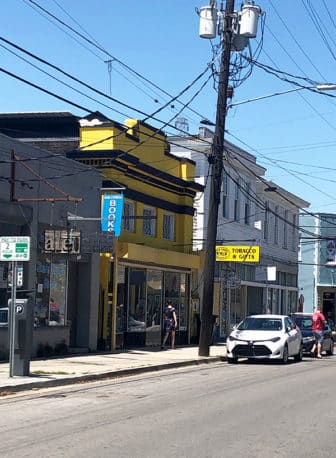 Oak Street is quiet on a weekend afternoon, a time when the street is normally bustling. (Sharon Lurye, Uptown Messenger)

Still, the days are pretty quiet. Meyer estimates they have around five sales a day. She misses the buzz of community that used to exist in the store, when folks came in to play Dungeons and Dragons together, sharing food and conversation over a tabletop game.

That community is one of the main things keeping the store afloat. The store created a page on Patreon, a website where fans can support artists or small businesses with small monthly payments. Meyer said she is “touched” that 71 people have signed up to support them, giving them more than $800 a month in extra cash.

“I don’t have worries that the shop is going to shut down, because of all the support,” she said.

Other businesses on Oak Street have had to completely change how they do business. Live Oak Café, as the name implies, focused heavily on live music to draw in brunch crowds six days a week. Now, chef-owner Clare Leavy cooks for hospitals and EMS squads through the Krewe of Red Beans and the Chef’s Brigade.

Those organizations use donations to pay restaurants to cook meals for front-line workers, thus supporting small businesses and first-responders at the same time. Leavy’s brigade, one of five teams in the Chef’s Brigade, is made up of female chefs and led by Susan Spicer of Bayona in the French Quarter and Rosedale Restaurant in Mid-City.

“Bad times bring out the best in people,” Leavy said, “and it’s been amazing to see these programs spring up out of nowhere.”

It’s been a grueling transition. Leavy went from managing a fully-staffed restaurant to working almost by herself, except for the help of volunteers. She cooks meals for 50 to 70 people at a time, six days a week.

“There’s just not enough revenue to keep my staff on,” she said. “They’re better off on unemployment, so I’m a one-woman show.”

Despite the heavy workload, she’s also doing take-out and has even expanded her hours to include a dinner service. And while live music no longer spills out the doors of the café each morning, artists still perform for online tips during Virtual Brunch and Distance Dinner. Customers can hear the performances on the restaurant’s Facebook page.

It’s a fight for survival each day for these local businesses, but each is being kept afloat by loyal customers who want to preserve the community that defines this street.

“Oak Street is like the last main street,” reflected O’Mahoney, the baker. “It’s so comfortable; it feels like it just sets you back in time.

2 thoughts on “Along Oak Street, business owners preserve their community during the stay-at-home mandate”