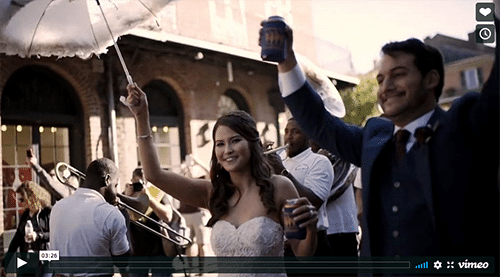 Professionals who depend on the local wedding industry include videographers, photographers and musicians as well wedding planners, caterers and florists. (Lonely Eskimo Productions, via EmilySullivanEvents.com)

Near the end of a meeting to discuss the future of the wedding industry in New Orleans, event planner Emily Sullivan took a phone call.

With restrictions getting tougher every day due to the spread of COVID-19, a phone call from a client is going to mean a cancellation or a postponement.

Weddings are big business in New Orleans. And like many businesses affected by the COVID-19 pandemic in the city, they are worried about their future.

A group of wedding professionals met last week at Bittersweet Confections on Magazine Street to discuss what the future may hold, as well as offer tips to other wedding vendors.

“We are advocating for our employees,” said Sullivan, adding, “with the understanding there is a business standing at the end of this.”

The COVID-19 pandemic in New Orleans has infiltrated its way into every business, with weddings among the hardest hit, due to how many people earn a living from them.

According to the online site, The Wedding Report, there were 8,530 weddings in the New Orleans-Metairie area in 2019, with the average wedding costs $27,544.

When a wedding – and the events surrounding it  — are canceled or postponed it reverberates through throughout the city: wedding planners, florists, caterers, restaurants, venues, bakeries, musicians, stationers, dressmakers, bridal stores, hotels, jewelers, photographers and videographers are among those who lose income.

The meeting took place after gatherings were restricted to no more than 50. Since then, both Mayor LaToya Cantrell and Gov. John Bel Edwards have tightened the restrictions, issuing stay-at-home orders barring all but essential activities until at least mid-April.

Where does that leave the local wedding industry? They have essentially lost income during March and April, two out of three of the industry’s busiest months.

“Everyone we know has canceled or postponed weddings to summer,” said John Rowland, owner of Southern Hospitality Catering.

As early as March 13, about 90 percent of March and April were canceled. And clients are hesitant to reschedule. “No one wants to make a commitment,” he said.

The local industry’s biggest month, October, could be difficult too.

While many still have their bookings in place for that month, wedding planners and associated vendors were not thrilled when the French Quarter Festival moved to the first weekend in October, as they lost bookings or future bookings.

They are also worried about New Orleans Jazz and Heritage Festival moving into October because it will make their jobs a lot harder: Hotel rooms will be more difficult to book and delivering food, flowers and other items on schedule is almost impossible because of traffic. Jazz Fest organizers  are rescheduling for sometime in the fall, but have not provided specific dates.

It is all part of the logistics of rescheduling a wedding’s many moving parts.

And it’s also dealing with a disappointed client.

“Our job is 90 percent managing emotions,” said Sullivan. “This is a rain plan, not their dream plan. We need to approach them to feel good about it.”

Most have clients calling to ask for their deposit back, with most taking it as a case-by-case issue, though vendors will bill for supplies that have been ordered.

Rowland had his March deposits in a savings account, but he said many people need to spend it as it comes in and won’t have the money to refund. “It will crush some businesses,” he remarked.

In the meantime, they are coping like many other businesses in the city. Watkins-Batmen at NOLA Flora is having locals pick up the flowers they ordered, while sending destination-wedding flowers (with the client approval) to nursing homes and other places.

Scripter, who makes some of the most coveted wedding cakes in town, has two Bittersweet Confections stores and cafes, including one on Hennessey Street in Mid-City, that have switched to takeout.

She also has a contract to supply pastries to vendors at the Louis Armstrong New Orleans International Airport. “As long as it stays open,” she said.

Rowland’s solution to the cancellations is to start off seasonal: He is boiling crawfish, sausage, corn and potatoes — orders must be placed by Wednesday at 4 p.m. for pick up Friday, Saturday or Sunday. The same timing applies to the weekly menu of family-style dinners they are making, and  “John’s Housemade Margaritas” is available by the gallon. Check the Southern Hospitality Catering Facebook and Instagram pages for the menu and updates.

After Hurricane Katrina, Roland said, it took time for banks to catch on that businesses did not have income coming in to pay loans and mortgages. If not getting payments deferred, at least the bank can take the interest off the payment. He advised by business owners to keep calling until they get what they need.

It will be a tough year, the wedding industry professionals said, but a bright spot is that weddings will still go on.