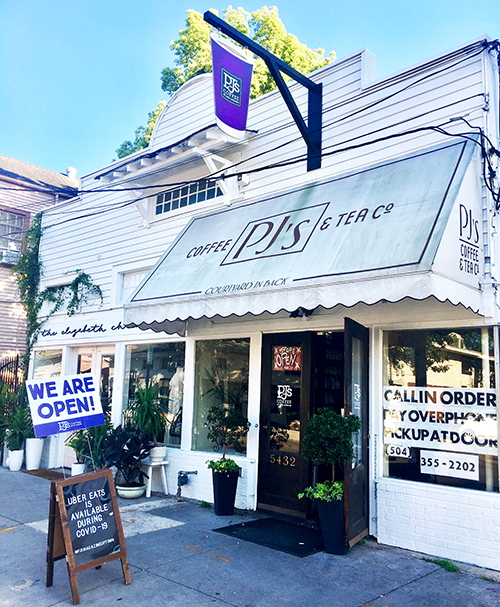 COVID-19 can live up to eight hours on cardboard takeout boxes and up to 72 on Styrofoam containers, straws, cups and plastic bags, says a study published by the New England Journal of Medicine. Airborne droplets can linger in the air for three to four hours after a person has coughed or sneezed.

What does that mean for locals who are supporting our beloved local restaurants and coffee shops? It means risk. Takeout and curbside service is a risk to the health of the workers and the customers, but how much?

That’s a question no one can answer yet. It may be a question some would prefer to ignore or deny.

What we do know is that some are ranking New Orleans COVID-19 infection rate higher per capita than that of other states and most foreign countries. And New Orleans is considered on track to be the next U.S. epicenter of the contagion.

When I hear Mayor LaToya Cantrell and I read her tweets on the issue, I can almost feel her struggle. The juxtaposition between being tough on containment and compassionate to hospitality workers and business owners has placed the mayor in a tight spot.

However, her mixed message may have put her administration and the restaurant industry in a tighter spot. No customer wants to be responsible for the closing of their neighborhood restaurant — but worse still, no one wants to hear that a restaurant’s staff has been infected with COVID-19. Or, on a more selfish note, that they purchased dinner from a restaurant where employees have been tested or in quarantine. It hasn’t happened yet, but it’s coming.

No first-time mayor is prepared to fight a pandemic. And rightly so, no one would want to trade places with Cantrell this year.

But by struggling to support the local restaurant economy, she has weakened the more important message — New Orleanians must flatten the curve and stay home. 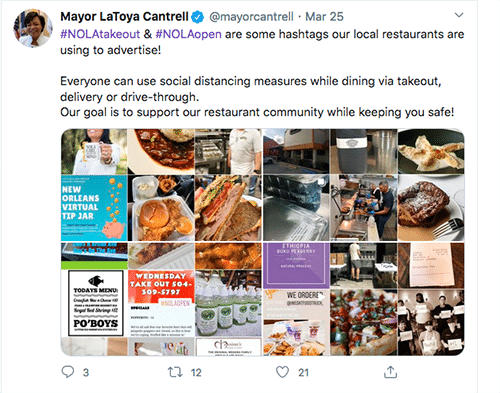 Yesterday and during the week, Mayor Cantrell has tweeted lists of New Orleans restaurants in posts that closely resemble restaurant marketing material. These tweets encourage locals to leave the house to retrieve takeout food.

Additionally, the mayor has launched a social media drive called the #LocalHerosChallenge [sic]. In it, the mayor is requesting that locals order takeout food for first-responders and then pick up and deliver it to the emergency workers.

Yesterday, the mayor, in a Twitter storm, posted a website and several other tweets featuring lists of open local restaurants. The mayor then tweeted the message: “Stay Home Save Lives.”

This was on the same day the mayor of New Orleans was on the national news sounding the alarm regarding the escalation of the pandemic within the city limits. Requesting federal assistance and desperately needed respirators for our critically ill and dying does not go hand-in-hand with tweeting restaurant lists featuring curbside service during a pandemic.

There are two significant schools of thought regarding the continued operation of New Orleans restaurants. One is, shut them down and flatten the curve. The other is to keep them open to support low-income workers who need the money.

Many restaurants have already closed voluntarily; many others will fail due to lack of business. Much like in the aftermath of Hurricane Katrina, the city will inevitably lose some small businesses during this crisis. We hope and pray that this is not the case, but it will surely occur.

Local chef and restaurateur Mary Sonnier, who voluntarily closed Gabrielle Restaurant, recently posited to other local restaurateurs her concerns regarding their decision to stay open during the pandemic.

Yes, of course, we do need to feed our valued first-responders. Overworked essential, medical and emergency personnel may rely on takeout meals for sustenance during a disaster or pandemic.

In Mid-City, chef Scot Craig of Katie’s announced that his restaurant had volunteered to prepare lunch for the medical staff of St. Margaret’s nursing home, the Harrison Avenue Fire Department, and the 1st and 3rd District police stations. This is an example of the essential use of a restaurant during a pandemic.

However, should the rest of us give in to the stir-crazy desire for a gourmet taco, an oyster po-boy, or a Neapolitan oven-fired pizza? Is it worth the chance of infecting the supply chain, our neighbors, the restaurant staff or our own families?

It’s not an easy issue, and it has many sides arguing differing points, but it will likely lead to a predicted end. Nonessential eateries will be forced to close until the COVID-19 outbreak is over. It’s not worth increasing the risk or the spread of COVID-19.

The controversial issue brings us to the logical query. If the preparation, sale and purchase of restaurant food will not be worth the risk in two or three weeks, why is it worth it now?

Note: If you are a proponent of takeout, please leave the packaging outside of your house while you wash your hands. Then transfer the food to clean plates, microwave on high heat and wash your hands again before feeding yourself or your family.

One thought on “Viewpoint: Weighing risk in the restaurant takeout dilemma”