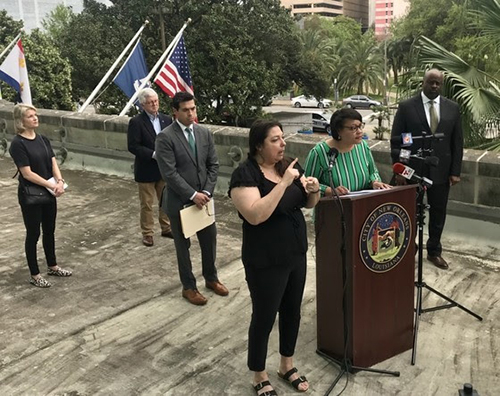 Mayor LaToya Cantrell holds a press conference on March 17. (via the Mayor’s Office)

Gov. John Bel Edwards and Mayor LaToya Cantrell are being too soft on New Orleans. With the number of confirmed cases and deaths skyrocketing, our elected officials don’t have the luxury of merely suggesting that people stay home as much as possible. Some form of sheltering in place must become the law of the land if we don’t want martial law and the additional restrictions it will bring.

Though it might sound extreme, sheltering in place slowed the virus in China and is currently being implemented in Italy, Spain, Belgium and France. The Ukraine has shut down all transportation. Even the beaches have closed in Greece.

French citizens are only allowed outdoors for specific reasons such as buying groceries, filling a prescription, or commuting to work if unable to work remotely. Several countries require a document which must be filled out and carried describing the details of the trip. Police in France are stopping motorists and pedestrians to check their papers.

With the New Orleans economy on life support anyway, sheltering in place is just another sacrifice we all must make so the city can better control that which is already out of control.

Today is the beginning of spring and the feast day of St. Joseph, which is celebrated by many New Orleanians whether or not they of Sicilian heritage. In the Christian faith, St Joseph was the husband of the Blessed Virgin Mary who is venerated by Sicilians because he provided them relief during an historic famine.

As immigration from the Sicilian region of Italy grew during the 1880s, the newly arrived to New Orleans began building elaborate altars to St. Joseph on his name day. The tradition has continued for almost 150 years. Though all the altars were canceled this year, it’s not too late to pull out a fava bean and pray for help overcoming the virus. May St. Joseph protect New Orleans!

JUDICIAL CAMPAIGNS SLOW DOWN DUE TO VIRUS

While the judicial election and Louisiana Presidential Primary has been postponed until June 20, judicial candidates  still had to file their campaign finance reports which detailed donors, funds raised, expenditures and cash on hand.

Aylin Acikalin raised $40,000 with $24,000 of the total in loans from herself and two donors including campaign manager Sandra Green Thomas. She also received $7,700 in in-kind donations including $5,000 from Fouad Zeton’s Magnolia Mansion where Acikalin held a kick-off.  She reported $24,000 cash on hand. Schalyece Harrison did not raise any money but loaned her campaign $11,000 and received $1,000 in in-kind services. Harrison reported no cash on hand.

As of this morning, candidate Robbins Graham has not filed his report, which has triggered a daily fine from the state ethics board. The New Orleans Coalition issued a dual endorsement of Lewis and Acikalin. Several other organization are still expected to issue endorsements when the campaigns begin again.