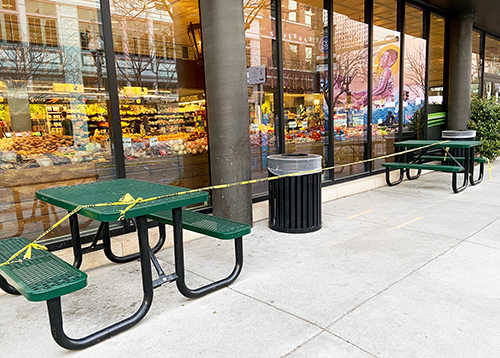 The tables outside Rouses on Baronne Street are cordoned off to prevent people from congregating. (Danae Columbus)

Every morning just before 7 a.m. Jonathan Rietmaier unlocks the doors of Mammoth Expresso, his popular CBD coffeehouse, so his employees can serve up the aromatic brew and pastries for which his small business is well known. Although strictly take-out these days, Riethmaier hadn’t changed Mammoth’s hours or staffing in an effort to help his five part-time employees.

“I am strictly trying to support the hourly wage earners who work for us. I want to help them earn a living so that they do not fall in a vulnerable space,” Rietmaier said. “As long as we can serve our customers in a safe and sanitary environment, we’d like to remain open.”

Though Mammoth does not operate at its pre-corona pace, customers — usually one at a time — trickle in all day long. Some can be seen enjoying their coffee and pastries while standing outside the building. Others sip their drinks in their cars or carry them down the street.

Rietmaier is luckier then most. His wife Darlene has been working remotely for a California firm for several years now. The couple has also worked out a system to care for and continue to educate their two small children, ages 3 and 7. “We will be able to get through this,” Rietmaier said. 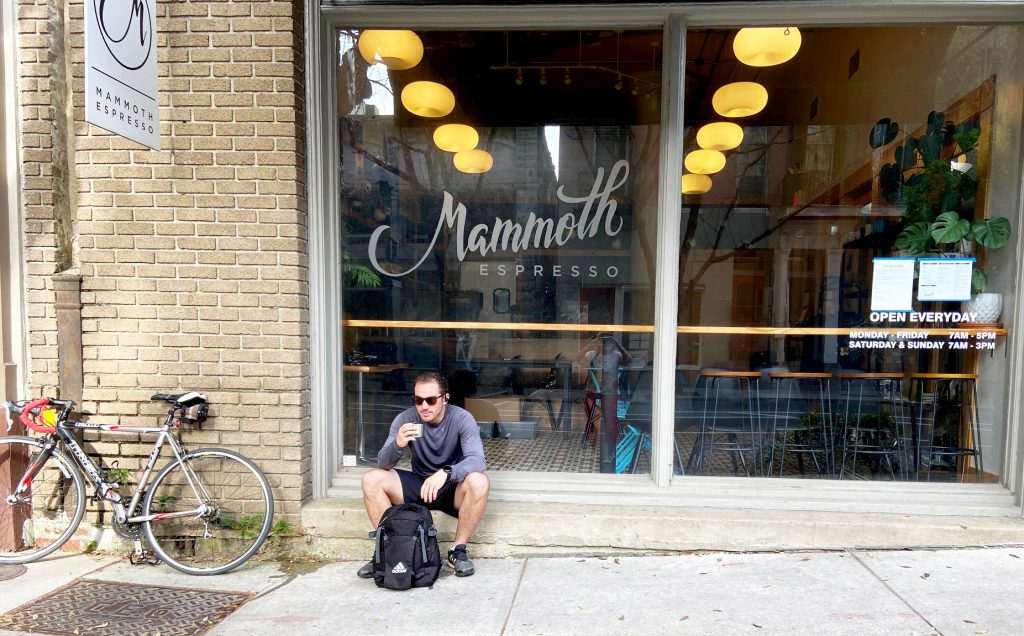 Unfortunately, many New Orleans families are not similarly situated. They have no financial cushion and are depending on federal disaster aid to provide funds for rent, utilities and food. They live in fear of the virus and are scrambling to protect themselves.

New federal legislation will provide some of the millions Gov. John Bel Edwards and Mayor LaToya Cantrell need to purchase the masks, testing kits, protective clothing and ventilators essential to helping save lives. Also needed are many more hospital beds — including at a repurposed Morial Convention Center — and qualified staff to operate these facilities.

With the large number of first-responders either sick or having been exposed to someone who tested positive, we need more National Guard and even the Army Corps of Engineers to help us through this crisis. While many volunteers, including retired medical professionals and students still in training, are stepping up, the need is still great.

With the number of confirmed cases in Louisiana continuing to explode, President Trump holds the lives of millions of citizens in his hands. The president must deliver honest messages to the American people and continue to work with Congress in a bi-partisan fashion to deliver the additional dollars that will be needed.

Rietmaier celebrated Mammoth’s fourth anniversary earlier this week with cupcakes at home rather than with a splashy birthday party for his loyal customers. “It was sad, bittersweet actually, but we are happy to still be here,” he said.

Politico reported yesterday that former U.S. Rep John Fleming of Minden is on the short list to become the new deputy chief of staff at the White House. Fleming resigned from Congress to run for the U.S. Senate in 2016 and has most recently served as assistant secretary of Commerce for economic development. U.S. Rep Mark Meadows, current acting chief of staff at the White House, has been talking with Fleming about joining his team. If selected, Fleming would be Meadows’ first hire.