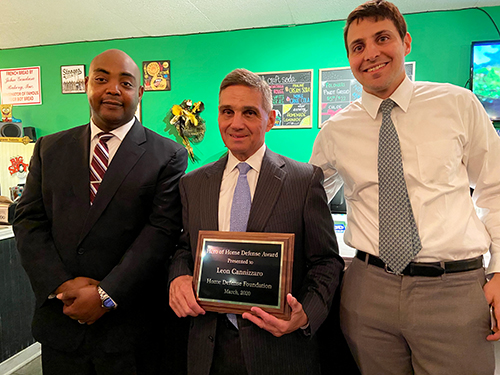 Although he has yet to formally signal whether he will seek re-election in the fall of 2020,
District Attorney Leon Cannizzaro gave a rousing address about New Orleans’ many crime problems and potential solutions to a packed crowd of Second Amendment supporters at the Home Defense Foundation’s meeting earlier this week. Attendees included New Orleans independent police monitor Susan Hutson.

“We have a crime problem in the city of New Orleans,” said Cannizzaro who has worked in criminal justice for more than 40 years. “Since I first became an assistant district attorney in 1978, I’ve never seen crowds as were gathered at Hynes School in January and at the Jewish Community Center. People are upset.”

Cannizzaro told attendees that a significant part of the problem can be blamed on former Mayor Mitch Landrieu, who set in motion the current police manpower shortage by failing to prioritize classes for new recruits during his first term.

“The criminals are in control,” he said. “With only one or two police cars per shift patrolling each district, officers have no back-up. They can’t be proactive. Unfortunately, they are not responding timely and fast.”

He strongly believes that the federal consent decree has “handcuffed the police and prevented them from doing their job.” Cannizzaro explained that there is a difference between “stop and frisk” and “profiling” and that police officers should be able to ask an individual who is in a public place for his or her name, address and an explanation for his or her actions.

He touched on the recent spate of car burglaries, including one last Sunday during which an Uptown resident was fired upon as he approached a group of young men vandalizing his vehicle. “All citizens deserve the right to live in safe neighborhoods,” Cannizzaro said, describing these perpetrators as “violent” criminals. “The police need tools to combat these crimes. We can’t just tie their hands.”

Cannizzaro also suggested that enforcement of existing curfew and truancy laws would help reduce juvenile crime. “Let’s hold the parents accountable,” he said. “Let’s get them involved to help get these bad guys under control.” Cannizzaro said he believes that most parents know what their children are up to regardless of what they might tell police when a search warrant is served on their home.

He said that the city’s Juvenile Court judges must get tougher. “Our Juvenile judges need to crack down to curb this problem. There must be consequences for juvenile offenders.” Cannizzaro is disappointed that the judges often release juveniles too quickly, giving them the opportunity to commit more crimes. He talked about one juvenile who was arrested 30 times in a single month.

Cannizzaaro thinks that recidivism would be reduced if additional focus was placed on juvenile offenders completing a high school education or learning a trade. “Juveniles should have a way to earn a living,” he said, “so they don’t have to rob people.”

He is adamant that additional beds should be quickly identified for juvenile offenders; the new Youth Study Center only has 48 beds, whereas the old facility had 90 beds. Cannizzaro suggested that Sheriff Marlin Gusman might have available space for violent juvenile offenders in a 60-bed wing that is currently underutilized.

Cannizzaro says he is still passionate about serving the community. “This stuff is important,” he said. “This is about all of us being involved to make our city safe.”

On Tuesday, March 17, Cannizzaro will be among the speakers at the Metropolitan Crime Commission’s annual meeting and awards lunch at the Sheraton Hotel. Other speakers include U.S. Attorney Peter Strasser, Jefferson Parish Sheriff Joseph Lopinto and John Belton, president of the Louisiana District Attorneys Association. Tickets are still available at metrocrime.org.

Cultural historian Charles Marsala will present an hour-long lecture Sunday, March 7, on the immigration of natives of Sicily to New Orleans. The first Sicilian who arrived in Louisiana was Henry de Tonti in 1682. The free lecture will take place at the National Park Service’s Jean Lafitte Visitor Center at 419 Decatur St. beginning at 1 p.m.