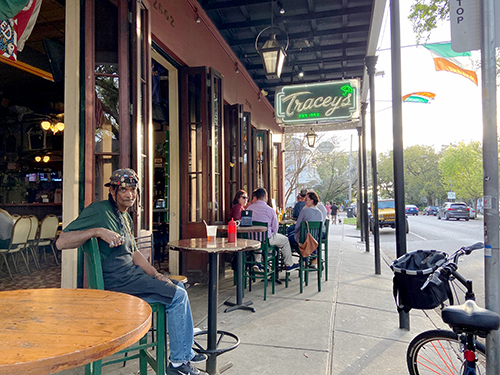 After Mayor LaToya Cantrell declared a state of emergency and recommended social distancing, patrons and workers still made the scene at Tracey’s and other venues across the city on Wednesday night. (Danae Columbus)

Now that Mayor LaToya Cantrell has declared a state of emergency and called for the Louisiana National Guard, New Orleanians who are used to hugging and kissing everyone in sight are being asked to embrace social distancing and other practices like constant hand washing that hopefully can slow the spread of the deadly coronavirus. How well Mayor Cantrell is able to manage the city’s ever-evolving response will be her enduring legacy.

Just like during Hurricane Katrina, there are a thousand parts and pieces. Most important is the coordination with local health care providers to ensure they have the necessary test kits, staff, equipment and other resources to treat the sick. Some supplies have become scarce, which could jeopardize quality of care. Plans must also be put in place for health care workers who contract the disease from patients.

The economics of the virus in New Orleans will be devastating to large and small companies and their employees. In the education sectors, colleges are moving to online classes. Surely secondary schools are not far behind. Teachers and administrators will continue to be paid — but what about dietary, security, environmental maintenance and bus drivers?

Consider the tourism industry. Conventions and special events are cancelling in big numbers, impacting hotels, restaurants, airlines, attractions, meeting planners, transportation providers and short-term rentals. How many employees in these businesses will be furloughed? Many are hourly employees without savings. No one knows how they and their families will survive.

Business is currently booming at grocery, drug and big-box stores like Walmart, Costco and Sam’s. At some point, customers will run out of money to keep the extra supply of items like toilet paper, or supply chain problems will continue to reduce already strained inventories. Fights over hand sanitizer or wipes are already not unusual.

With few tourists in town and residents being encouraged to basically stay home, mom-and-pop retailers will feel the pinch.

How successful will Mayor Cantrell be in securing funds from state and federal government to assist hard-hit residents and businesses? President Trump is only beginning to focus on what Americans will really need.

Mayor Cantrell could ask Entergy and the Sewerage & Water Board to halt service interruptions until the crisis passes. She could delay monthly sales tax filings. She could ask banks to offer low or no interest loans or extend lines of credit. She could ask mortgage companies to postpone foreclosures and postpone taxes sales of adjudicated properties. She could ask landlords, including HANO, to halt evictions.

Finally, let’s touch on public safety. Did Mayor Cantrell request the Louisiana National Guard because she feared lawlessness à la Katrina or was she just being cautious? Crimes like robbery, assault and carjackings could easily go up. Just last night a perpetrator tried to rob a friend outside my neighborhood grocery. To his chagrin, she whacked him with a full bag of groceries.

Mayor Cantrell and her team appear to be taking all the right steps. How the public reacts to social distancing, self-quarantines and accepting professional responsibility for their actions will make it easier or harder for city officials to do their jobs. After all, we are a city whose residents love to party. That habit will have to change, at least for the short haul.