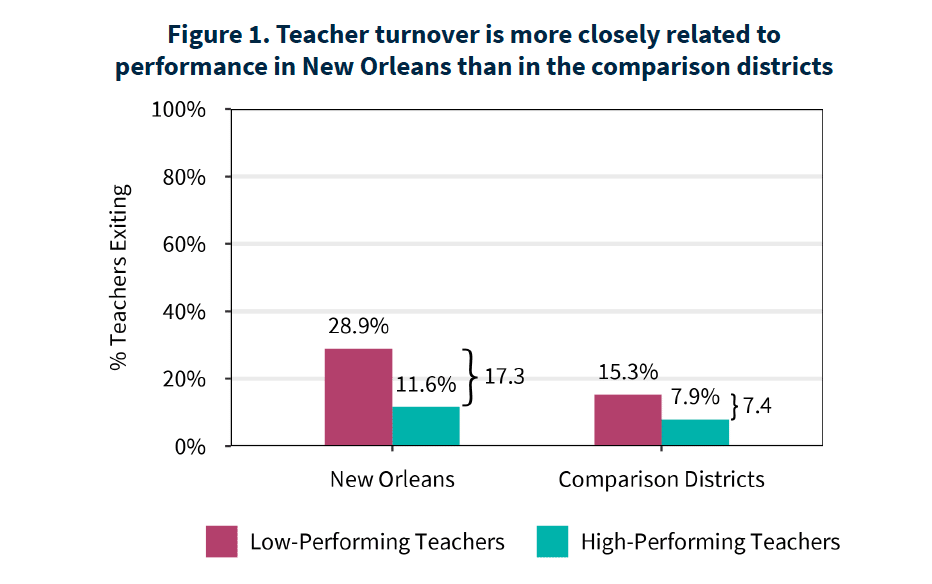 From the National Center for Research on Education Access and Choice

A new study from an education research center based at Tulane University finds that New Orleans’ all-charter school system succeeds in removing low-performing teachers, but it struggles to replace them with high-performing ones.

The study by National Center for Research on Education Access and Choice, or REACH, cuts to the heart of the debate over whether market-based school reforms help improve teacher quality. In New Orleans, all schools are charters with great freedom to hire and fire teachers. Schools also compete with one another for talent and are under intense pressure to raise student test scores.

Advocates of market-based reforms argue that this combination of flexibility and accountability should encourage schools to remove ineffective teachers.

“We started by just looking at whether charter schools in New Orleans are more effective at keeping their best teachers than traditional districts,” said Lincove. “We found that they are.”

However, while average teacher performance in New Orleans is somewhat higher than in comparison districts, it has not consistently improved over time. That is because new teachers coming into New Orleans tend to have less experience and lower skills, the researchers found. Moreover, without traditional job protections like tenure, there is a high turnover rate overall.

Researchers also found that the top teachers in New Orleans saw a much larger increase in salary if they switched schools than if they stayed put. This incentive to switch schools could also inadvertently encourage teacher turnover.

“It’s somewhat surprising that charters don’t seem to reward high-performing teachers that stay in their own schools. They only seem to reward teachers when they’re recruiting them away from other schools,” said Harris who also directs the REACH center.

These findings highlight the complexities of improving the quality of the city’s teachers, and show how reforms intended to improve accountability can have their own unintended consequences.