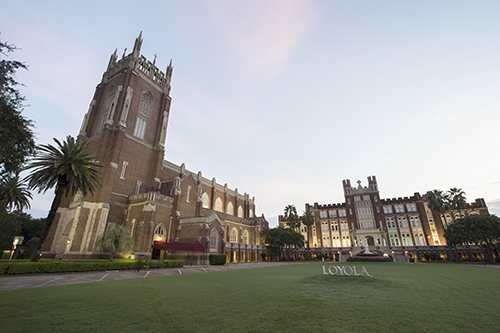 Loyola University moves to online classes beginning Monday and has canceled on-campus classes for the rest of this week. (photo via loyono.edu)

Two Loyola University students and a faculty member went into a 14-day self-quarantine on March 10, at the request of the university, after attending a journalism conference and having lunch at a downtown restaurant with an individual who was later diagnosed with COVID-19 novel coronavirus.

The students and professor have not displayed any symptoms, Loyola President Tania Tetlow said in a March 11 letter to the Loyola community announcing that all classes will taught online for the rest of the spring semester beginning Monday (March 16).

Tetlow said the potential exposure was not the reason behind suspending on-campus classes. Tulane, Xavier, UNO and other local universities also have moved their classes online as more coronavirus cases are announced in New Orleans.

“I have spoken to the director of state public health, who tells me that there is not a reason to broaden that circle more widely — those who later interacted with the faculty and students do not also need to self-isolate,” Tetlow said in the letter.

The students in self-isolation include Erin Snodgrass, the editor-in-chief of university’s student newspaper, The Maroon, according to a Maroon report. The school has not released the identity of the other student or the faculty member.

They attended the National Institute for Computer-Assisted Reporting conference put on by Investigative Reporters and Editors, which was in New Orleans from March 4 through March 8. Organizers announced Tuesday (March 10) that an attendee tested presumptively positive for COVID-19.

“I was certainly surprised to find the coronavirus hitting so close to home but I am feeling fine and at this moment, I am not concerned that I have the virus,” Snodgrass told a Maroon reporter. The Maroon has suspended print publication but continues to publish online.