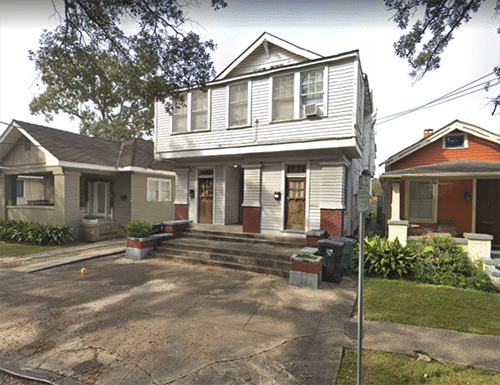 This Lowerline Street building, purchased in August by an out-of-state investment firm, has been approved for nine units. (Google Maps)

New Orleans residents know something about parking scarcity. Off-street parking is rare in the rows of century-old doubles and singles that make up the city’s historic neighborhoods.

In most areas, this is a problem occasionally, during special events or when a neighbor has a party. In the university area near Tulane and Loyola — where rental units are in especially high demand — it is constant, residents say, and it’s been getting worse.

To create more rental units, doubles have been converted to fourplexes and triplexes with six bedrooms are expanded to create 12, according to city records compiled by neighborhood activists. A shotgun double in the 800 block of Hillary Street, for example, was converted to camelback, adding 800 square feet to create an eight-bedroom building without adding off-street parking.

These additional residents need to put their cars somewhere. And the resulting parking scarcity creates problems that go beyond the everyday aggravation involved in finding a parking space.

“It really creates a whole range of problems,” said Keith Hardie, vice president of Maple Area Residents Inc. “It causes people to violate the law and park on the sidewalk or in the front yard or too close to the corner. Curbs get broken. Sidewalks get broken. Front yards get paved over, and that leads to more water going into the gutter.”

The MARI board asked for relief from the city, resulting in a two-part proposal on the City Council’s agenda for Thursday. It’s calling in part for a public hearing and a study by the City Planning Commission to look at ways to ease the parking problem.

The study would show what changes would need to be made to Comprehensive Zoning Ordinance to mitigate the parking issues, said Claire Byun, a spokeswoman for District A Councilman Joe Giarrusso, who worked with the neighborhood to develop the measures.

The area to be studied is bounded by St. Charles Avenue, South Carrollton Avenue, Claiborne Avenue and Broadway Streets. Giarrusso is proposing the creation of an Interim Zoning District that would require off-street parking for any increase in the number of bedrooms.

Other solutions Giarrusso has put forth include permitting owners and developers of multi-family
buildings to lease off-street space from nearby properties and creating a permit for allow residents to block their own driveway.

The proposal is also calling for the CPC to review the zoning and parking regulations in other urban neighborhoods adjacent to universities or other large institutions.

The City Council will consider the measures at the Thursday (March 5) meeting.