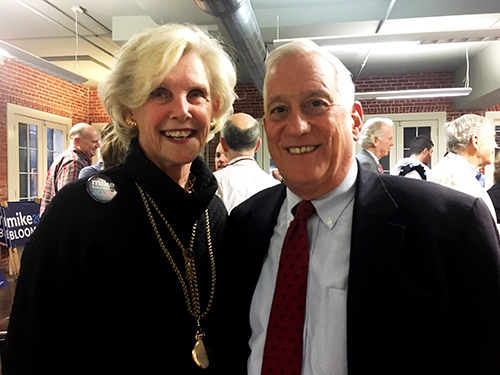 Democrat Anne Milling and Walter Isaacson, registered as No Party, were among the dozens who attended the opening of presidential contender Mike Bloomberg’s headquarters in New Orleans earlier this week. (Danae Columbus)

Bloomberg launched a multi-million dollar national advertising campaign and has opened up strategic headquarters around the country, including in New Orleans at 642 Julia St. where dozens of interested citizens turned up Tuesday night.

“I’m impressed by Michael Bloomberg’s experience and accomplishments as well as the campaign he’s putting together. I think not only that he can beat Trump, but that he’d be a great President,” said Jacobs.  In a recent poll taken for The Economist/YouGov on Feb. 2-4, Bloomberg registered at 9%, up five points since the previous poll.

Some attendees became more curious about Bloomberg’s candidacy after being disappointed by the campaign of former Vice President Joe Biden. Biden was not expected to win Monday night’s Iowa caucus, where he ran fourth. Nor is he expected to win next Tuesday’s primary in New Hampshire where voters have a history of supporting candidates from neighboring states. Leading up the Super Tuesday elections on March 3, Biden is expected to run strong in Nevada and South Carolina, where his connection with African-American voters should prove important. Louisiana citizens will have their chance to vote in the presidential primary on April 4.

Nationally, moderate Democrats are focused on defeating President Trump, who is gaining momentum after his acquittal by the U.S. Senate yesterday. Caccioppi, an incoming member of the Louisiana Democratic Party’s State Central Committee, said Bloomberg has the best chance to beat the president. “Joe Biden is suffering from a lack of energy. Bernie Sanders might be a good guy but it would be insane for Sanders to go against Trump,” he said. Caccioppi is a realist. He was a UNO student in the 1970s during the Nixon/McGovern presidential campaign, when McGovern lost by a landslide despite the enthusiastic support of young voters. “Young folks need to become acquainted with the benefits of capitalism in our economy.”

Caccioppi views Bloomberg as a knight on a white horse which is going to save the Democratic Party from itself.  “I’ve always admired Bloomberg. He was a great mayor for New York and the citizens prospered. He is using his self-made wealth to back really important issues around the world like fostering gun safety and slowing climate change. I hope that Bloomberg catches on and the value of his candidacy is appreciated by the Democrats,” Caccioppi concluded.

The Uptown and Mid-City Messengers will hold a watch party for the New Hampshire primary Tuesday, Feb. 11, at Twelve Mile Limit, 500 Telemachus Street.

CANDIDATE SARA LEWIS TO BE FETED AT PARADE PREPARTY ON FEB. 8

Need a convenient spot to gather prior to the start of Saturday’s Krewe Du View Parade? Attorneys Megan Kiefer and Jacob Young are hosting a preparty in the Bywater for Sara Lewis, also a candidate for First City Court Section B.

More than a dozen current and former elected officials are helping new District 98 State Rep. Aimee Freeman eliminate her campaign debt. A fundraiser has been planned for Monday evening, Feb. 10, at the Uptown home of Maria and Andy Wisdom. Freeman will be serving on the Appropriations, Education and Labor committees.

SEMINAR ON INVESTING IN WOMEN SET FOR FEB. 11

Julie Schwam Harris, the leading women’s lobbyist in Louisiana, along with Alisha Fernandez Miranda will host a conversation on investing in women on Tuesday, Feb. 11, at 9 a.m. in Hotel Peter & Paul.  “Prioritizing women and girls is the best way to change the world,” say the duo.

[Editor’s note: Danae Columbus’ Jan. 16 column may have included potentially misleading information about the relationship between Tucker’s qualifying address and her candidacy. It has since been updated and clarified.]

Iam Christian Tucker, a candidate for Democratic State Central Committee, 97th Representative District, Office A, qualified for office Wednesday, Jan. 8, using an address the briefly differed from her homestead exemption. When contacted about the issue, Tucker said that she pays property taxes on multiple residences and thought she had already changed her homestead exemption to the home she currently occupies. She then contacted the Assessor’s Office to make that change, and her candidacy was not affected by the issue.