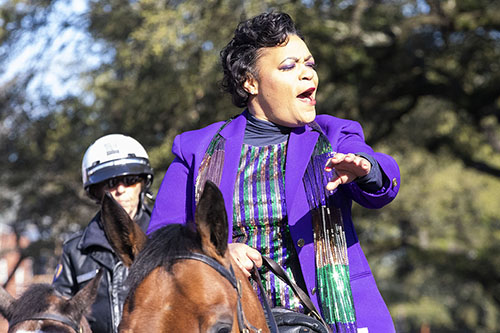 Although Mayor LaToya Cantrell’s job performance ratings took a hit from last year, according to a new poll, Cantrell still reigns supreme over all things News Orleans. The poll — taken earlier this month by Ed Chervenak’s Edgewater Research and Tony Liccardi’s My People Vote — provided a snapshot of the mayor’s favorability midway through her first term.  Results showed that Cantrell is less popular than either mayors Landrieu or Nagin were at this point in their administrations.

The biggest take-out from the poll was her drop in favorability with white voters. African-American voters – especially males — clearly appreciate Cantrell. She is most popular in Council District E, followed by districts C and D. Caucasian voters, especially women and Republicans, are much less enchanted with the mayor by almost polar opposite numbers.

The poll of 441 New Orleans registered voters didn’t dig deep into what issues troubled them. But it is probably fair to say that the Hard Rock tragedy and the obvious need to overhaul the Department of Safety & Permits, slow solutions to New Orleans ongoing infrastructure issues, repurposing of tourism dollars, and the mayor’s years-long tax issues with the IRS would top the list. The tax issue is particularly sensitive as many citizens struggled to pay their new higher property tax bills, which were due last week.

Cantrell was pretty much an unknown citywide when she got elected. Lots of citizens didn’t understand how her social worker background would influence her values, her operating style and her grassroots approach.  Some are still adjusting to her desire to create numerous committees to study problems and that she has the best answer to address every issue. Others think there are times Cantrell does not act like the chief executive of a major American city. Voters elect mayors to lead. Cantrell took that mandate to heart and set a pace that still satisfies the majority of her constituents.

All in all, it really doesn’t matter what the mayor’s poll numbers reflect at midterm because she has no announced opponents. Council President Helena Moreno — whose name is frequently batted around – has given no indication she is interested in running. Mitch Landrieu made similar comments until all polls showed he could clearly win the race for mayor.

Though Mayor Cantrell is still popular, she could be beat. The ideal opponent would be of any race or sex, native or not, and on the cusp between millennial and boomer. He or she would have to be progressive – but not too progressive — and have the ability to attract crossover votes. Most of all, the candidate would have to be acceptable to the predominately white business leaders who fund campaigns.

In the last election, that group put their money behind Cantrell. Their financial support gave her the dollars necessary to spark an outstanding social media campaign, which in turn gave her a leg up to victory. Cantrell will definitely need them again to tell her new story of why she should be re-elected. Fifty years ago, New Orleans politicians were mostly white but courted black voters to carry them over the top. Today New Orleans politicians are mostly black but need white voters, and their checkbooks, to win elections. How times have changed.

It’s never easy for a woman to serve as an elected official, especially an African-American woman. Yet, Cantrell is stepping up every day to lead the parade the way she sees it. All hail Queen LaToya!

GROUPS WEIGHING IN ON JUDICIAL ELECTIONS

Editor’s note: This report was edited after posting to clarify that the New Orleans Bar Association poll was not an endorsement. By policy, NOBA does not give endorsements for any candidates. The results reflect only the views of the Association’s individual members who voted.

The New Orleans Bar Association has released a poll of its members on their preferences for First City Court. Sara Lewis, who previously locked down the support of the Alliance for Good Government, won the bar poll by a clear majority. Marissa Hutabarat was the favored candidate of labor leaders at the Greater New Orleans AFL-CIO. Other groups will be holding their endorsement meetings after Mardi Gras. Judicial candidate Aylin Acikalin, now divorced, is no longer using her married name, Maklansky. She ran for the City Council two years ago as Aylin Maklansky.