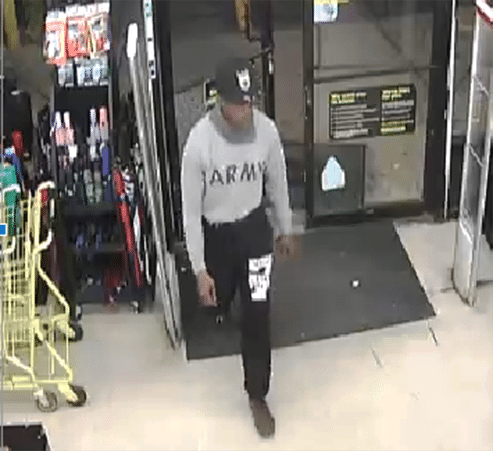 The suspect is seen on video entering the Dollar General on Earhart on Jan. 31. (via NOPD)

The New Orleans Police Department is requesting the public’s assistance in locating and identifying a suspect in connection Carrollton-area two armed robberies that occurred a half hour apart on Jan. 31.

The first robbery occurred at the Walgreens at 718 S. Carrollton Ave. in the Riverbend area. The second was at the Dollar General at 8201 Earhart Blvd. in Hollygrove.

According to investigators, at approximately 9:15 p.m., a man entered the Walgreens brandishing a firearm and demanding money. Once the cashier complied, the suspect fled with an undetermined amount of cash and a candy bar.

Approximately 30 minutes later the same man entered the Dollar General with a firearm demanding money. The cashier refused, at which time the suspect fled the location with some lighters.

The suspect was described as a black male, possibly in his 40s, about 5-foot-10 with a thin to medium build. He was wearing a gray sweat shirt that said “Army” on the front and a black “A” design on the back with black pants with white writing on both legs (possibly patches), black shoes, black baseball cap and a gray bandana around his neck.

Currently, investigators are in the process of gathering evidence and information to identify the suspect involved in this incident. Second District Detectives are in charge of the investigation and be contacted at 504-658-6020. Citizens with information that can help solve this crime are asked to call Crimestoppers at 504-822-1111.