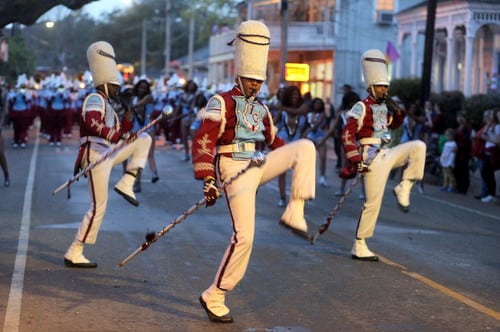 The Talladega College marching band performs with the Krewe of Hermes in 2019. (Robert Morris, UptownMessenger.com)

It will be an especially Fat Friday on the Uptown parade route tonight, with Krewe of Muses and the Knights of Babylon float-only processions joining the Mystic Krewe of Hermes, Le Krewe d’Etat and the Krewe of Morpheus.

The weather that ousted Muses and Babylon from their usual time slots is expected to calm down. On Friday morning, the National Weather Service was predicting clear skies and 5 to 10 mph winds. The cold air is sticking around though — with a low around 40 — so bundle up to head out to parades. 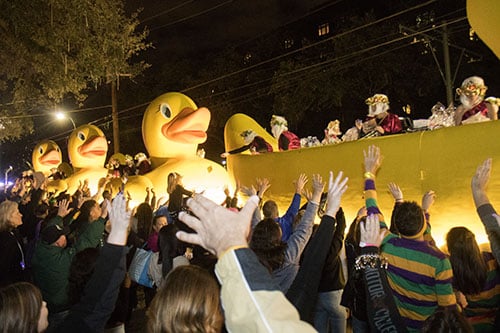 The first all-female Mardi Gras krewe to parade Uptown at night, the Krewe of Muses has grown into a 1,500 member krewe and a highlight of the parade season. It is beloved not only for its signature throw, the artistically glittered shoe, but for its clever satirical themes and floats. Muses usually has a highly entertaining collection of bands and dance troupes as well, but this year the floats are rolling solo because of the schedule change. The theme is “2020 Visions: NostradaMuse Sees All.”

Watch for: The 2020 Honorary Muse is actor Jennifer Coolidge, a Hollywood mainstay ever since playing Stifler’s mom in American Pie. Look for her riding in the shoe float.
Catch it if you can: The Muses shoe is among the most coveted throws in Carnival, but just about anything this group throws is worth catching and holding onto.

Route: The route, like the parade, has been shortened in the interest of time, beginning at Perrier and Napoleon instead of Jefferson and Magazine. 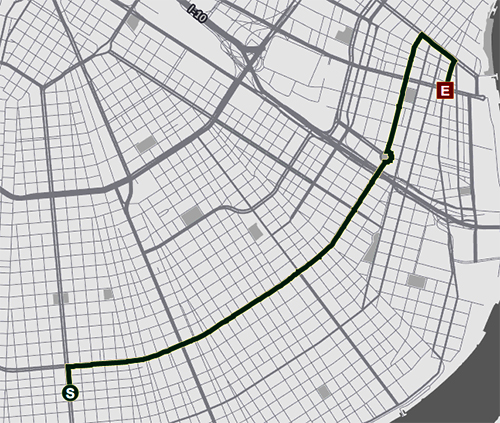 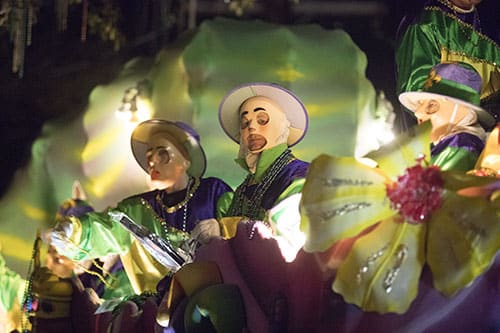 Knights of Babylon toss beads to the crowd in 2019. (Zach Brien, UptownMessenger.com)

If you want to know what Carnival parades were like in the early 20th century, watch the Knights of Babylon lead the way in the Thursday lineup. The krewe’s 27 floats have the same basic designs and dimensions that they did at the krewe’s inception more than 80 years ago. This year, with the last-minute schedule change, the floats are all revelers will see. Their theme is “Mythological Menagerie,” depicting creatures such as gargoyles, the salamander of the sun, the minotaur and the abominable snowman.

Watch for: A mule-drawn float carries Sargon, Babylon’s monarch named for an ancient king of Assyria (722-705 B.C.) who is reputed to have built the city of Babylon.
Catch it if you can: The signature throws, including koozies, hats and dolls, have a jester theme.
Route:
START: 5:15 p.m. at Napoleon Ave. and Magazine St.
Left on Napoleon Ave.
Right on St. Charles Ave.
Proceed on St. Charles Ave. around Lee Circle.
Right on Canal St.
END: 555 Canal St. 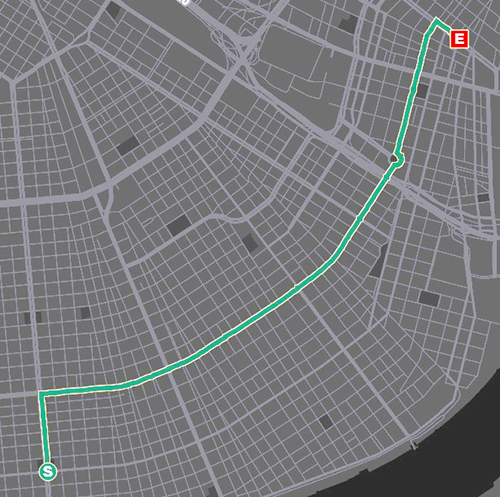 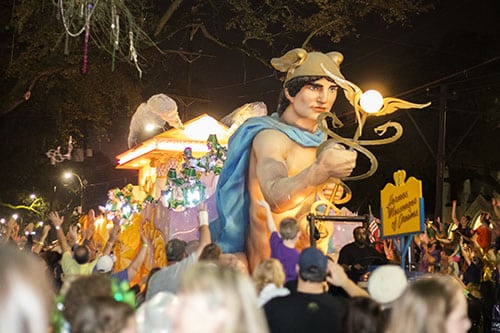 Founded in 1937, the steadfast Hermes can boast of being the oldest krewe on the night-parade calendar. Like its namesake, the winged courier of the gods, Hermes delivers its message with pageantry and moves at a disciplined pace. The krewe’s inaugural parade was the first to use neon lighting for its floats. Its parades, with floats designed by Henri Schindler, continue to win awards. The theme this year is “Carnival at the French Opera House.”

Watch for: Hermes is introducing a new signature float, the Argeiphontes. The mythological Hermes was called by this name, which means “slayer of Argus.” Marching groups include the 610 Stompers, and bands include the St. Augustine Marching 100.
Catch it if you can: The Hermes doubloons come in four colors.
Route:
START: 5:30 p.m. at Jefferson Ave. and Magazine St.
Right on Magazine St.
Left on Napoleon Ave.
Right on St. Charles. Ave.
Proceed on St. Charles. Ave. around Lee Circle.
Left on Canal St.
Left on Baronne St.
END: Baronne & Canal St. 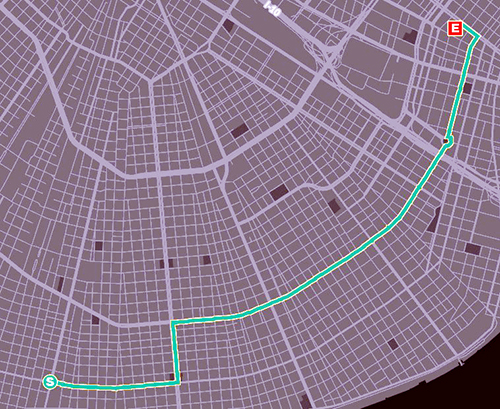 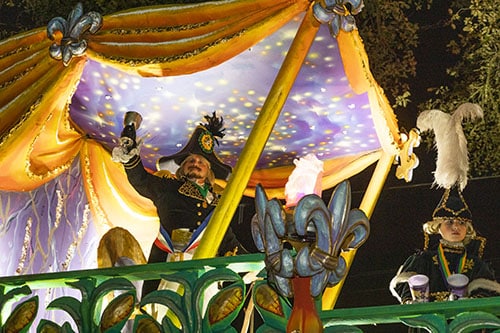 This all-male krewe known for its sharp satirical floats has this warning to its followers from its leader, The Dictator: “The Dictator assures his denizens that no rank or office is immune from his wit.” The 24 d’Etat floats have traditional beauty as well as wit. The Dictator’s Banana Wagon is pulled by mules, and the captain and lieutenants ride on horseback throughout the parade.

Watch for: The Skeleton Krewe leads the parade handing out D’Etat Gazette, a fold-out guide to the floats.
Catch it if you can: D’Etat was the first krewe to throw lighted blinking beads; its signature throw has a blinking skull. Other prized throws are a stuffed gargoyle and glow-in-the-dark beads with flashing green eyes. 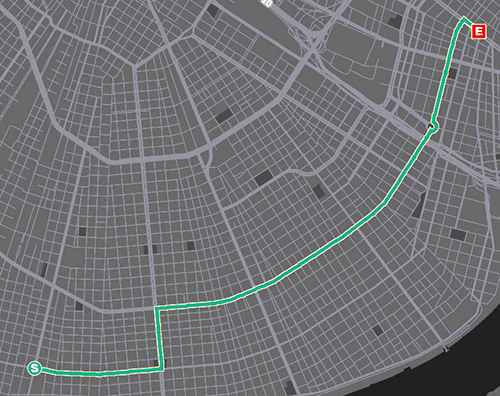 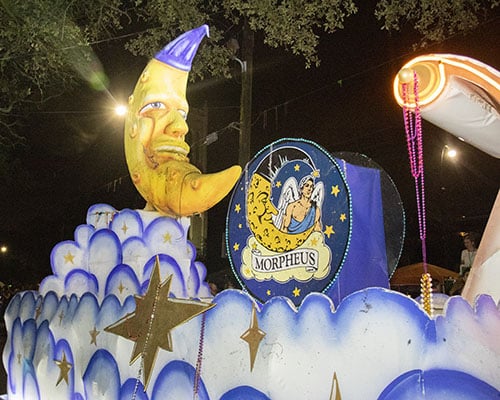 New Orleanians have been closing out Fat Friday with Morpheus, named for the goddess of dreams, since 2000. The theme for its 20th year is “Morpheus Dreams of Aquatic Adventures.” The krewe has more than 750 male and female riders on 24 floats.

Watch for: A new title float features state-of-the-art lighting.
Catch it if you can: Morpheus’ new signature throw is a hand-decorated sleep mask. Other signature throws include LED sleepy time hats and plush sheep, moons, pillows and bears. 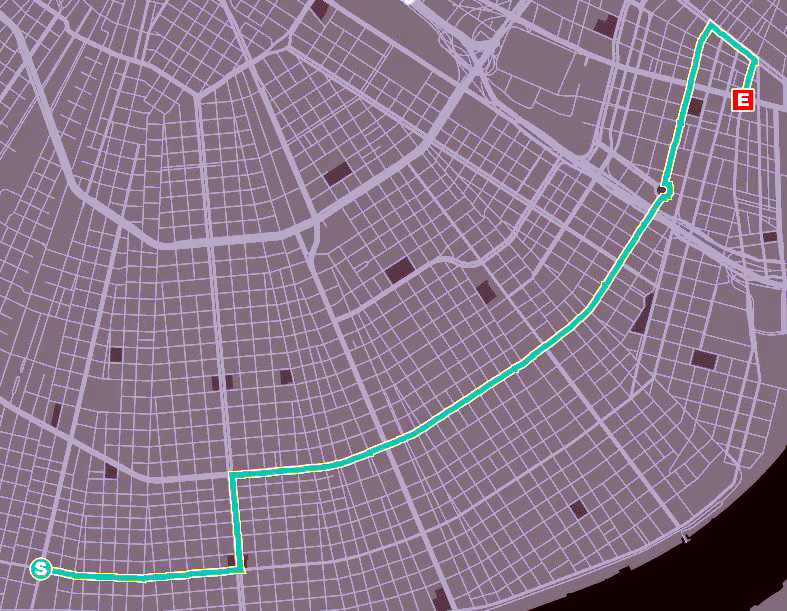 Route for Krewe of Morpheus (ready.nola.gov)