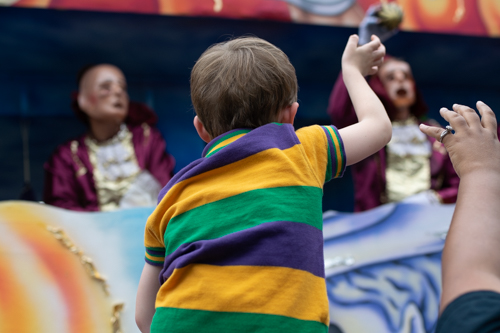 Henry Myers gets a boost to catch beads during the 2019 Krewe of Thoth parade. (Uptown Messenger)

Five parades will roll through Uptown today and tonight, with the Knights of Chaos mixing things up by joining the Sunday daytime roster after Thursday’s weather-related cancellation. Bacchus will rule the night, with changes to its famed tandem floats.
Weather should not be a problem today. The National Weather Service forecasts cloudy but dry skies with a high near 64 and winds from 5 to 10 mph. 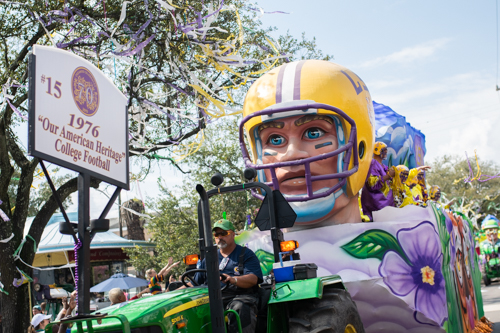 An LSU-themed float rides down St. Charles Avenue with the Krewe of Okeanos in 2019. (Uptown Messenger)

It’s been 71 years since Okeanos first rolled on St. Claude Avenue to give its downtown neighborhood a Carnival parade of its own. The krewe named for the Greek god who created the rivers now parades up the river on the Uptown route, with 320 riders on 23 floats. The theme this year is “Okeanos Honors the Gods.”

Watch for: Themed floats include one devoted to its namesake, titled “Okeanos God of Fertile Rivers and Valleys.”

Catch it if you can: Okeanos riders will be throwing teal crawfish trays. 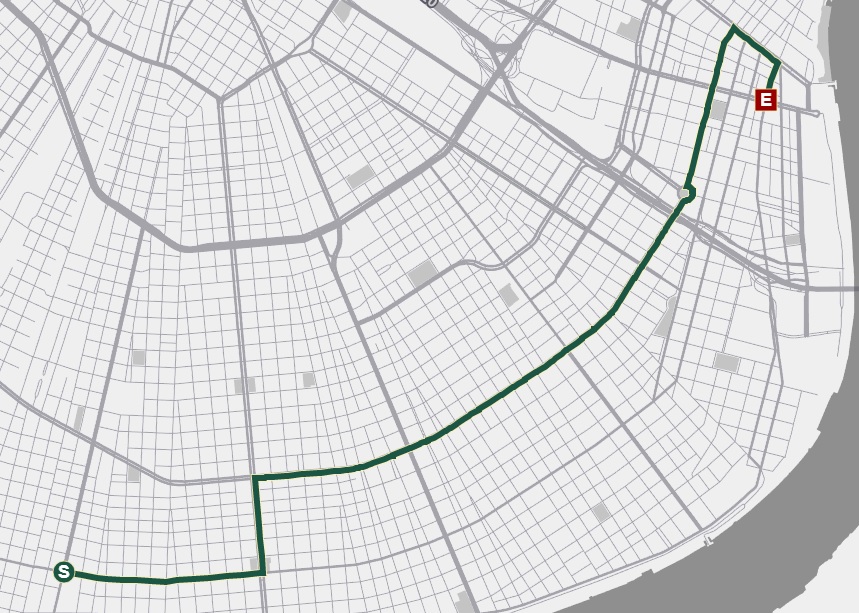 Route for Krewe of Okeanos (ready.nola.gov) 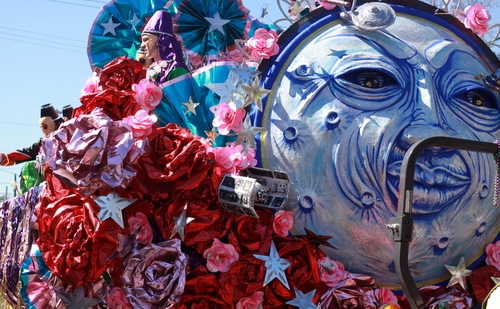 Like Okeanos, the Krewe of Mid-City began as a neighborhood parade. It rolled through its namesake neighborhood until 2002, when most Mid-City parades were moved Uptown so the city could consolidate security in the aftermath of Sept. 11.

Mid-City’s 17 floats are decorated entirely in bright tinfoil, just as the were when the krewe first parade in 1933.  It is the only parade to use this tinfoil technique. The theme for 2020 is “Heart Breakers and Head Bangers.”

Watch for: The signature City Park float pays homage to the krewe’s roots.

Catch it if you can: The krewe throws Elmer’s CheeWees, cheese curds in tinfoil bags. 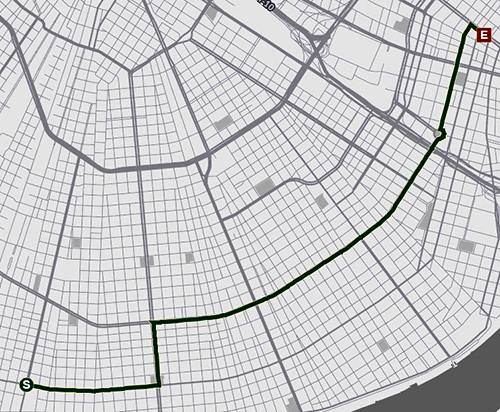 Route for Krewe of Mid-City (ready.nola.gov) 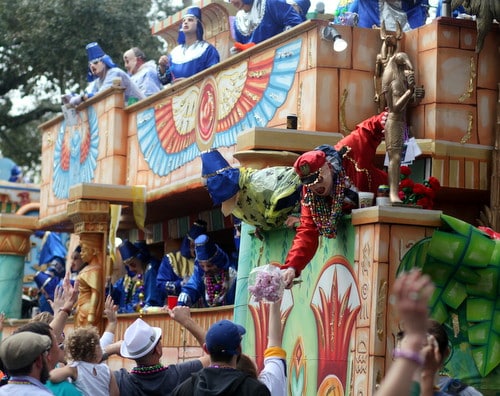 The Krewe of Thoth rolls on Magazine Street in 2018. (Robert Morris, UptownMessenger.com)

Thoth has always paraded Uptown but on its own individualistic route — designed designed to pass in front of institutions that care for people who could not otherwise experience a Carnival parade. When Thoth started parading in 1947, it had 50 members on five floats. It now rolls with more than 1,600 riders on 50 floats. The theme this year is “As the World Turns.”

Watch for: Grand Marshal Louis Prima Jr. will perform as he rides.

Catch it if you can: Thoth Sunday T-shirts, Thoth fedoras and Thoth socks. 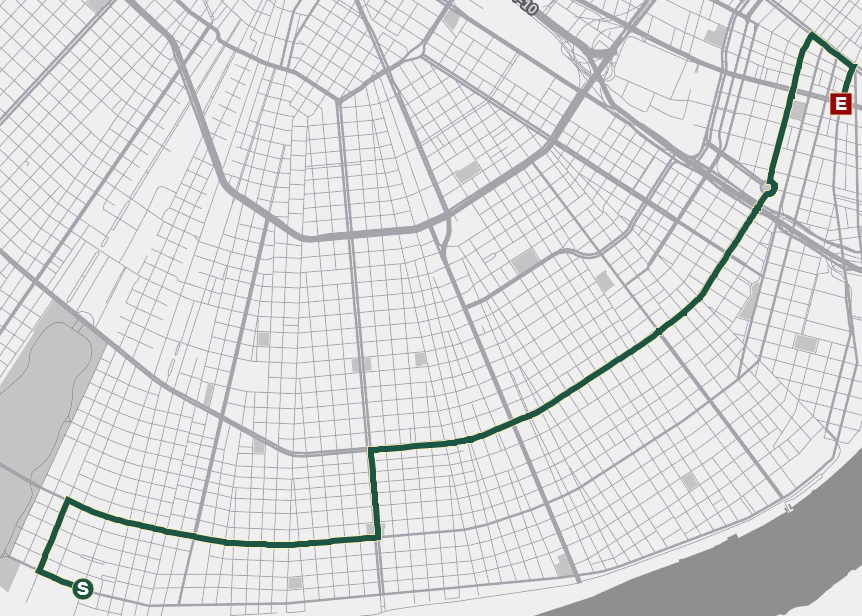 Route for Krewe of Thoth (ready.nola.gov) 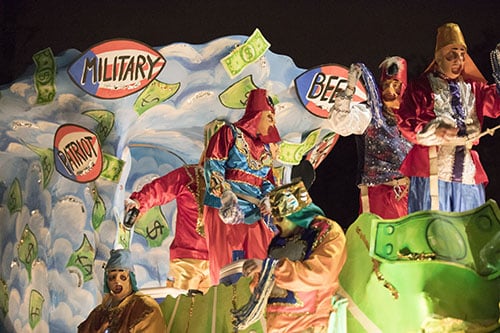 The Knights of Chaos mock the NFL in 2019. (Zach Brien, UptownMessenger.com)

This is the 20th anniversary ride for the Knights of Chaos. In 2000, Chaos took over a spot on what was once “Momus Thursday,” but this year it moved to Sunday because of Thursday night’s weather conditions. So the traditional night parade is venturing into daylight for one year.

Chaos still employs Momus floats and presents a satirical parade in the Momus tradition. The krewe combines old-line traditions with contemporary themes. The 16 floats and the theme take jabs at local and national political issues. This year the theme is “Looking Forward to Chaos.”

Watch for: Floats will skewer everyone from the tax assessor to LeBron James.

Catch it if you can: The krewe will have special 20th anniversary throws. 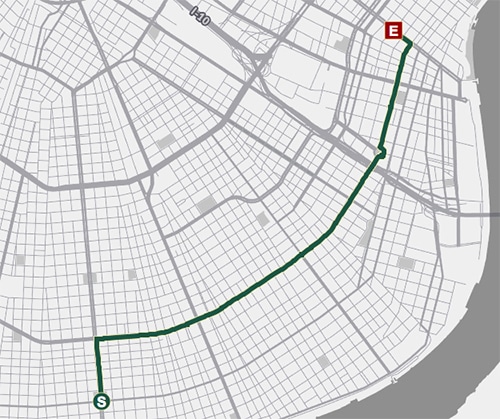 Route for Knights of Chaos (ready.nola.gov) 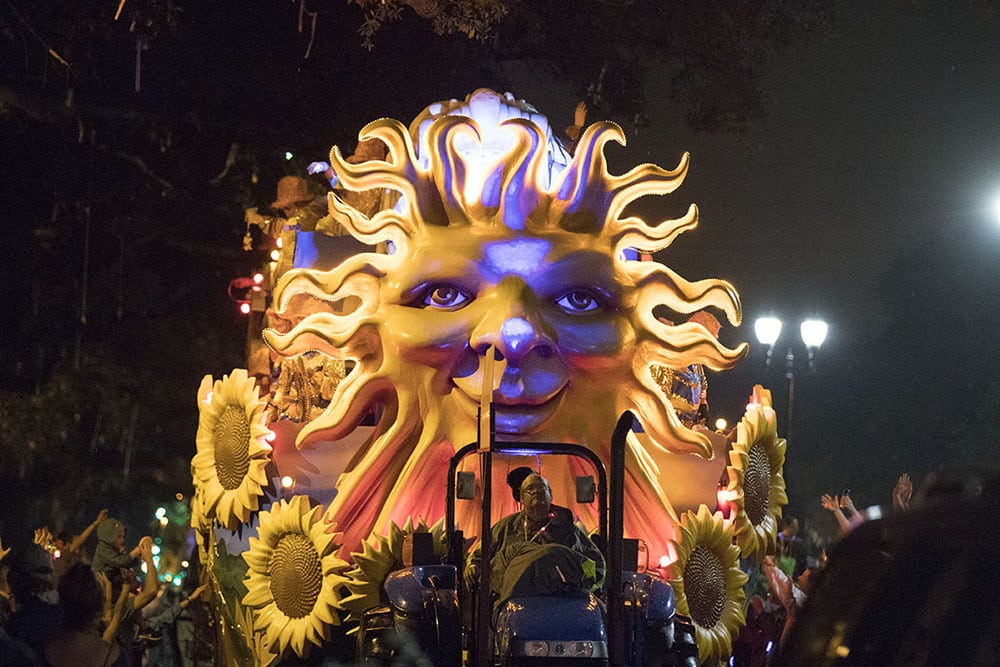 Sunday’s sole night parade was founded in 1968, but its roots stretch further. Now a superkrewe, Bacchus is known for its spectacular floats and its celebrity monarchs. Singer-songwriter Robin Alan Thicke will reign as Bacchus LII, leading a parade with the theme “Bacchus’ Wild, Wild West,” portrayed in 21 theme floats. This year, however, the floats will be broken to comply with the city’s temporary ban on tandem floats. The parade also features more than 30 marching bands.

Watch for: The Little League World Champions from River Ridge are riding as special guests.

Catch it if you can: New throws for 2020 include light-up bolo ties and light-up cowboy hats. 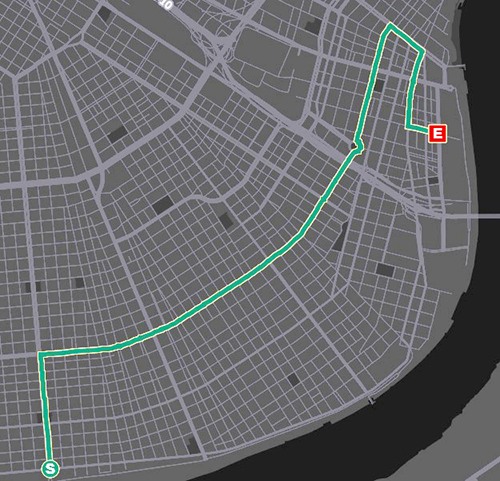 Route for Krewe of Bacchus (ready.nola.gov)