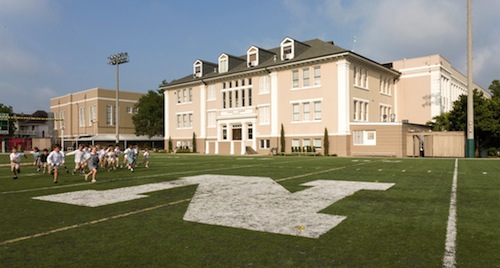 Isidore Newman School has announced a capital donation from Boysie and Joy Bollinger in support of its arts program. This gift, the second $3 million gift in Newman’s history, is the lead donation to fund construction of a state-of-the-art performing arts building on Jefferson Avenue.

The 5,500-square-foot building will hold acoustically optimized rehearsal rooms for Newman’s band and choir programs as well as an art gallery for student work, according to the school. The arts project also includes the construction of a flexible black-box-inspired theater space for smaller student productions.

The Bollingers make this gift as philanthropic leaders in the New Orleans community and as the grandparents of two current Newman students.

Boysie Bollinger, chairman and chief executive officer of Bollinger Enterprises, described his family’s inspiration for the gift in a press release: “Joy and I believe firmly in the value of arts education to the human spirit and to preserving and strengthening the culture of our great city.”

Newman officials called the gift “transformational” for the 117-year-old private school in the heart of Uptown. “Joy and Boysie’s gift allows us to realize our master plan,” Board Chairman Peter Sperling said.

“We are profoundly grateful for the Bollinger family’s tremendous gift to our school,” said Head of School Dale M. Smith in a press release. “The construction of a brand-new arts center on one of the most prominent sites on our campus – adjacent to the historic Jefferson Building – is a powerful testament to Newman’s ongoing commitment to arts education.”