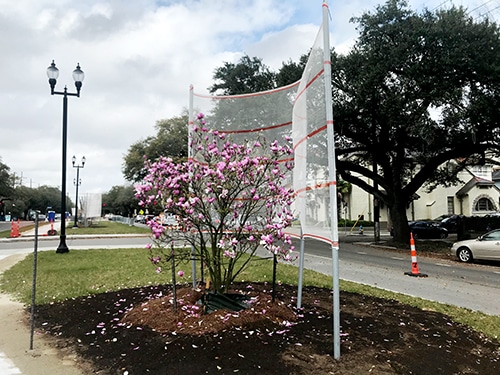 A Japanese magnolia on the Napoleoon Avenue neutral ground is prepared to face a barrage of beads. (Nicholas Reimann, Uptown Messenger) 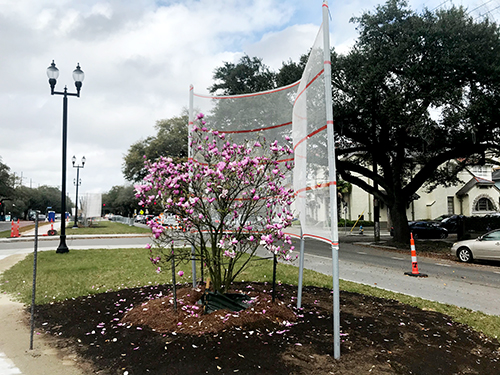 A Japanese magnolia on the Napoleon Avenue neutral ground is ready for the parades to begin. (Nicholas Reimann, Uptown Messenger)

It’s become one of the postcard images of Carnival in New Orleans — beads and other debris lining trees along the Uptown parade route, some to the point of being hardly recognizable.

But parade-goers this season on the Napoleon Avenue portion of the route won’t take in any sights that like there — at least if the U.S. Army Corps of Engineers has its way.

That’s because over the past week, the corps has installed more than 100 nets to block beads from latching onto trees on the Napoleon Avenue neutral ground — trees that have just been planted in the past month and are still getting used to their environment, according to corps spokesman Ricky Boyett.

“The timing and impacts of Mardi Gras season have been a known factor in this project since its early planning. Netting has been placed to shield the trees from beads becoming wrapped around young branches,” Boyett said, adding that temporary fencing has also been put up around trees to keep pedestrians from walking on the developing root systems.

Lindsey Purcell, an urban forestry specialist at Purdue University, said if beads were to land on the trees it would take a likely take a careful removal process to keep from damaging them — but the dangers from beads could be more serious than that.

“The No. 1 pest of trees in the urban forest is … man,” Purcell said, warning that the primary concern is that an excessive amount of beads on the young trees could even lead to collapse. “The second issue would be if heavy enough and left long enough, this amount of debris could interfere with biological processes such as photosynthesis. The debris blocking out all of the light could have an impact, if left long term.”

This is the first time the corps has used these barriers for any of the trees planted on its Uptown “Greenspace Restoration” projects, like those seen on Louisiana and Jefferson avenues, which are all part of the corps’ $2 billion infrastructure improvements under the Southeast Louisiana Flood Control Project.

Those past “Greenspace Restoration” efforts — given that name because the trees and walkways are actually an effort to reduce flooding — did not overlap with Carnival season, Boyett said.

It’s unclear whether protections for the trees will remain in place in the future, as the corps expects to have turned over responsibility for the Napoleon Avenue neutral ground to the city’s Parks and Parkways department by then.

The city did not respond to a request for comment on its plans for the trees.

Most of the trees being protected are younger than 10 years old, according to Boyett, with some grown in containers and others field grown.

From looking at photos of the protection effort, Purcell said he’s confident the netting should do a good job at keeping beads from accumulating in trees, which the corps said include nuttall oak, green ask, Alexandrina magnolia and crepe myrtle. 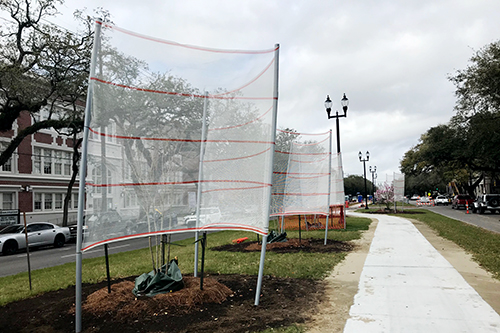 Netting is protecting these newly planted trees from possible damaged caused by the weight of the beads and by their removal. (Nicholas Reimann, Uptown Messenger)