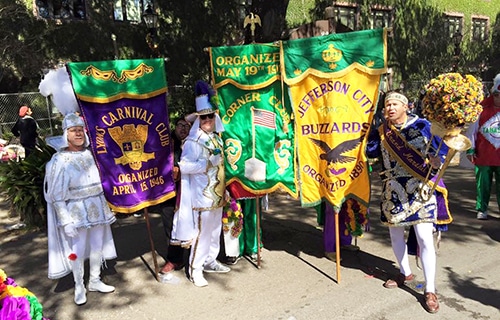 Practice makes perfect, and on Sunday (Feb. 9) the Lyons Club will aim for this lofty goal when its pre-Mardi Gras practice march meanders its way through Uptown, starting at 1 p.m.

Accompanying them on this journey are the Merry Antoinettes, Organ Grinders, Dames de Perlage and Pussyfooters.

And don’t be surprised to see members of the Jefferson City Buzzards, another walking club, dressed in drag, as tradition dictates for this march. The Buzzards, founded in 1890, also make their official march on Mardi Gras, along with the Irish Channel Corner Club and Pete Fountain’s Half Ass Walking Club.

Lyons Club, founded in 1945, had its first march, Mardi Gras, Feb. 19, 1947. Its route on Mardi Gras takes it from Grit’s, through Uptown, onto Napoleon Avenue, where it makes a turn at St. Charles Avenue and walking the parade route, eventually ending in the French Quarter.