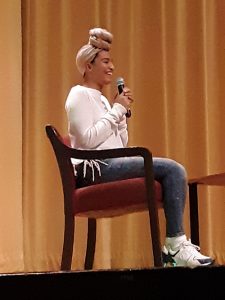 Actor and model Indya Moore spoke at Tulane University on Monday (Feb. 17). Moore is best known for the role of Angel Evangelista in the FX drama Pose.

They are also openly transgender and non-binary (hence the use of the plural non-gendered pronoun to refer to one person).

The event, part of Audre Lorde Days at Tulane, was hosted by the office for Gender and Sexual Diversity at Tulane, the Office of Multicultural Affairs and the Carolyn Barber Pierre Center for Intercultural Life.

Audre Lorde Days offer opportunities during spring semester for students, faculty, staff and community members to come together to “develop tools for using human difference as a springboard for creative change,”according to Tulane’s website.

Moore sat down in the McAllister Auditorium for a Q&A that felt intimate and stayed late to answer every audience question. They then attended a meet-and-greet after the show.

Only 25, Moore was in foster care when they started acting and modeling. They now use their platform to speak out about the intersecting issues facing black and trans people. However, noting their position as a TV star, they say that they feel uncomfortable using the label “activist.”

“I get so much credit for every little thing that I do,” Moore said. “Other people that are doing the work aren’t getting the recognition and attention… I think that’s not fair.”

Moore noted that many activists do extremely hard work that is mostly unpaid, and took time to plug the Transgender Law Center, an advocacy organization by and for transgender and gender non-conforming people.

At a fashion awards show in September, Moore wore earrings and a purse with the faces of the 17 black trans women who were murdered last year. Black trans women face disproportionate levels of violence, which can be deadly. The American Medical Association has described it as “an epidemic.”

Moore grew up in New York City, and spent years in foster care and group homes after facing abuse with their family for their gender. They were sex trafficked and later used sex work to survive, and purchased hormones on the black market in that time.

A couple of audience members asked Moore for advice. One was a student who works to bring more people of color to Tulane, even though as a person of color they said they find Tulane an isolating place to be — a place where they often do not want to be.

“If there were more people of color at Tulane, a lot more people would learn a lot more,” said Moore, who encouraged the student to keep working, though they acknowledged that predominantly white organizations often feel hostile.

Moore also encouraged the audience to find organizers already working in their communities in order to work effectively for change.

After talking about their upbringing, Moore says, “I’m still trying to find what makes me happy… I don’t know what liberation will look like, but I know what we want from it.”