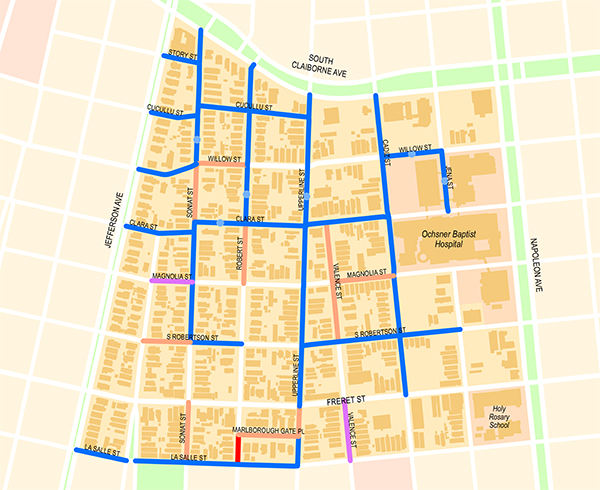 Around a year from now, city officials say, much of the Freret neighborhood will have repaved streets, repaired curb ramps and replaced sidewalks — with work set to start at the end of this month on a $4.2 million FEMA-funded roadwork project.

Work on the project, which is one of more than 200 being funded across the city with more than $2.2 billion of FEMA money, is expected to begin on LaSalle Street either at the end of this month or early next month, according to a contractor on the project.

The boundaries for improvements are bounded by South Claiborne on the north, LaSalle Street on the south, Jefferson Avenue on the west and Napoleon Avenue on the east, with an expected completion by early 2021.

The work will then continue north toward South Claiborne Avenue, likely going from the Jefferson side of the project before finishing on the Napoleon side.

Exact improvements on each street — available online at roadwork.nola.gov — were determined by FEMA, according to city officials. It will not include any new street features — just a replacement of existing ones, officials said. 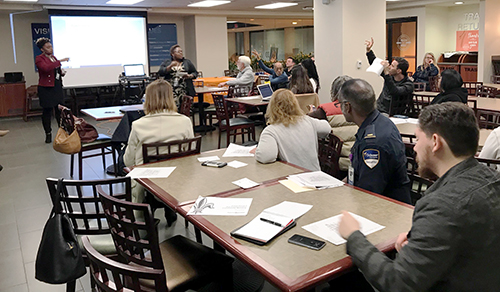 About 30 Freret residents gather to ask city officials questions ahead of street work in the Freret neighborhood on Jan. 8, 2020. Work is set to go on throughout the year. (Nicholas Reimann, Uptown Messenger)

Neighbors in the area welcomed the coming improvements, saying they are badly needed. But many who attended a community meeting for the project Wednesday night also expressed concern over specifics, saying they didn’t want this to be a repeat of previous roadwork projects in the area that dragged on for much more time than the original estimate.

“I’m concerned that, you know, two weeks turns into a month, one month turns into two months,” said Daniel Shanks, who lives in the 2800 block of Cadiz Street.

Shanks said he especially hopes something will be done about a storm drain in front of his house, which is feet below the sidewalk. He’s concerned because he has young children, and the drop-off to the drain poses a safety hazard.

“Getting them into and out of the car’s going to be really hard,” he said of when work gets underway in front of his home. “But that’s something we’re willing to endure if it results in a street that I feel a lot more comfortable with.”

Residents will be notified of street and sidewalk closures in front of their homes at least 48 hours in advance, city officials said, and workers will try to avoid having work done on consecutive blocks to keep traffic flowing.

Michelle Ingram, who owns Zeus’ Place and lives on Valence Street, said previous roadwork had crippled her business and others in the area.

After a presentation from officials at Wednesday’s meeting, Ingram said she remained concerned about planning, saying she wanted “more answers this close to the start date.”

But work itself, according to Ingram, is badly needed.

“We’ve been needing it for a while, especially with our school buses having trouble getting down the street,” she said.