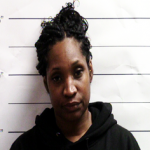 A woman was arrested Sunday morning after an argument turned violent in the Hoffman Triangle area, the New Orleans Police Department reported.

When the man grabbed her by the neck to push her off, she pulled out a pocket knife and stabbed him in the shoulder and bicep, police said. He was taken to the hospital via private conveyance.

Cotton was booked at about 9:30 a.m. on one count of domestic abuse battery via strangulation and one count of aggravated battery. It is her only arrest on record with the Orleans Parish Sheriff’s Office.