A Proud Legacy and a Proud Grandmother:
Why My Grandson and I Love Booker T.

In the seventh installment of our ten-essay series by parents of students at public schools Uptown, Dorothy Bowens writes about her grandchild’s experience at Booker T. Washington High School. Like New Orleans as a whole, Uptown has many public school options for families—from college preparatory schools, to three different language immersion programs, to a Montessori program, to a technology career pathway school. In this series, we hear from families themselves on why their child’s school is right for them. 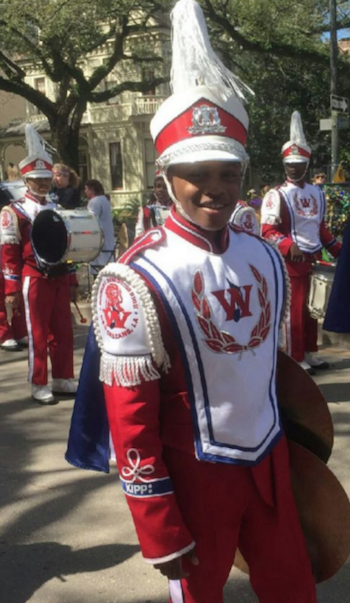 Booker T. Washington High School has a strong legacy in New Orleans. The school was built in 1942, and its alumni have been leaders in our community since then.

I know a lot of Booker T. Washington High School alumni myself. My baby sister is a Booker T. Washington alum, and so are my big sister and sister-in-law. The alumni are very involved in the school community, making sure that everything is right with the school. Recently, an older class came in and gave students book-sacks. They’re there at the football games and events, too. They had the Booker T. Washington picnic last month and people from the class of 1942 on up were there.

From the alumni to the current students, teachers, and families, the community at Booker T. Washington High School is wonderful. That’s one of the many reasons why I am grateful that my grandson Mekhi is a student there. He is currently in the 10th grade.

Mekhi has been attending KIPP schools since day one of his education. Booker T. Washington is operated by KIPP New Orleans Schools, so going there was an easy step after attending KIPP Central City Primary (KCCP) and KIPP Central City Academy (KCCA). Many of his classmates from those schools are at Booker T. Washington as well. I have been an active part of the community in all of these schools; they call me Maw Maw. 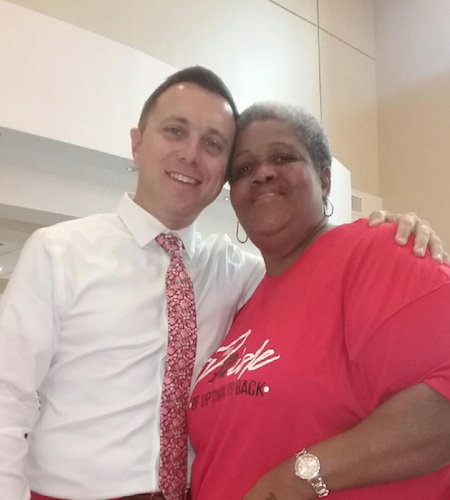 Mekhi’s teachers will call me with updates, and they say to me, “If there is anything you need, just give me a call.” I’ve known the principal, Mr. Corvo, since Mekhi was at KCCA, and I love him. If I have a problem, I can always go and talk to him. Every time he interacts with students, he’s got a smile on his face. He loves them and he pushes them to grow. Everyone from Ms. Jackson and Ms. Nicholas, the office managers, to Ms. Champion, the security guard, to Mr. Johnson and Ms. Hammond, the school leaders, to Mr. Harris, the assistant principal, to Mr. Corvo, and all Mekhi’s teachers are like that. We are all in it together.

Together, we are helping Mekhi grow as a person, not just as a student. The teachers are challenging, but supportive. He is learning a lot; his favorite subjects are Spanish, Chemistry, and Math. One of his teachers, Ms. O, called me last week and said, “I’m so proud of Mekhi, he’s doing really well so far this year.” 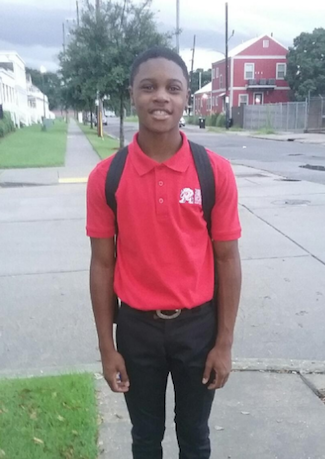 Mekhi is also learning musically. He has been playing cymbals in the band for six years, since he was in middle school. He practices each evening. The band really keeps him going. They march in many parades during Mardi Gras. Seeing him there marching last year, I was excited, not just for him, but for everybody in the band. I know he feels good about marching, too. He gets up there and turns up the cymbals all over town. He was tired, but then he woke up and did it all over again.

Booker T. Washington is there for kids to help them learn and grow, from academics, to music, to sports and beyond. This year, it opened in a new building where the old Booker T. Washington had been before Katrina. It is a beautiful building; they did a very good job. It is important that it is right in the same spot as the old school, because they are preserving its history. The Booker T. Washington of today has a respect for the past, and Mekhi and his classmates are its future.

Booker T. Washington High School is located at 1201 South Roman Street. Enrollment for the 2020-2021 school year for Booker T. Washington and nearly all New Orleans public schools is open now through EnrollNOLA. You can find out more information at enrollnola.org or call or visit a Family Resource Center.