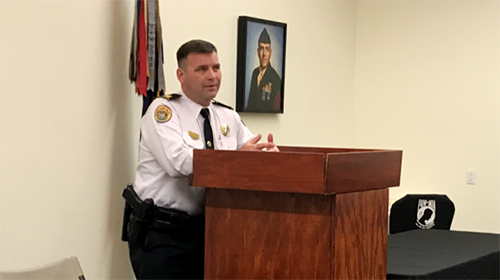 When it comes to stopping the surge of vehicle break-ins plaguing New Orleans, there is little that police can do, NOPD Second District Commander Jeff Walls told a packed crowd at a community meeting Thursday at the NOLA VFW hall on Lyons Street. “Your frustration is our frustration,” he said.

“The anger that I have about this — you have no idea,” Walls said.

The commander largely blamed the city’s problem on Juvenile Court judges, who he says put juvenile vehicle burglars — which make up a large portion of the offenders — back on the streets, in many cases within a day of their arrest.

Many of those vehicle burglars are repeat offenders, with several groups of juveniles making up the vast majority of vehicle burglaries in the city, Walls said.

In at least one case, one juvenile has been arrested over 50 times, according to Walls.

“I hate to say it, but a lot of these kids — it’s fun for them,” Walls said, adding arrests don’t seem to make a difference when there’s no punishment or rehabilitation effort, again blaming Juvenile Court judges. He also said beds at detention facilities aren’t being properly utilized, leading to quicker release times.

Walls said authorities are now trying to get more creative when it comes to dealing with repeat offenders — specifically citing parents for improper supervision, which can carry a $500 fine for a first offense.

“Every time we have repeat offenders — we’re going after the parents now,” he said, while urging those in attendance to voice their displeasure to the Juvenile Court judges.

“This pressure that y’all are putting on the judges is helping us,” Walls said.

Walls’ meeting with the community, which was organized by the Uptown-based Faubourg Avart Neighborhood Association, came a day before New Orleans Police Department Superintendent Shaun Ferguson was set to hold a news conference to address the issues on a citywide level.

For Diane Sinclair, who attended the Uptown meeting, the car break-ins are by themselves a serious inconvenience and a violation of privacy, but her major concern is that if authorities don’t do something soon to stem the issue, more serious crimes might be on the way.

“That’s the danger — somebody’s going to get shot,” she said. A 62-year-old woman was shot to death in Mid-City last spring trying to stop a teen who had broken into her car.

She also agreed with Walls saying not enough is being done once an arrest is made, saying those doing the break-ins “don’t even care anymore.”

“The cops have been arresting these people over and over again and they get no penalty. The kids are laughing about it,” she said.