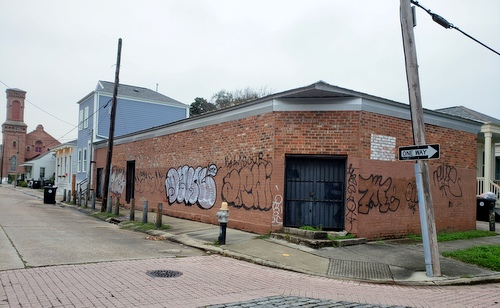 The owner of the building at 700 Josephine wants to rezone the property back to commercial use. (Robert Morris, UptownMessenger.com)

A request to rezone a long-shuttered corner store on Josephine Street back into commercial use is raising questions among neighbors in the Lower Garden District, who say the lack of a specific tenant and the wide range of possible uses create the potential for trouble on a vulnerable residential block.

Matt Hamdan of Metairie has owned the single-story brick building at 700 Josephine St. (at the intersection with Chippewa Street) since the early 1980s, he said at a recent meeting with neighbors. He building has been vacant since before Hurricane Katrina, when he closed the corner store there before, he said.

During that time, it lost its commercial zoning, and the property is now classified for two-family residential. Hamdan said he would like to begin recouping some revenue from the building, but its clearly commercial construction makes it a poor fit for residential use, so he would like to rezone it in hopes of finding a business to move in.

Exactly what kind of business is yet to be determined, and no tenant has been selected, Hamdan acknowledged in a Dec. 27 meeting with a handful of neighbors at a corner table at the nearby Turkey and the Wolf restaurant on Jackson Avenue.

He suggested office space for professional services — “law, accounting, tax office,” according to his letter inviting residents to the meeting — or some sort of retail, like “(non-alcohol) grocery, clothing, specialty store.”

Hamdan specified, however, that he has no desire to return it to a corner store, a restaurant or anything that might include the sale of alcohol.

“I don’t want grocery store, or liquor, or beer,” Hamdan said. “I want something easy.”

The uncertainty around the actual future use of the building concerned Ryan Kropog, president of the Lower Garden District Association and one of three residents to attend the meeting.

Kropog pointed out that some of the uses suggested by Hamdan could also be achieved by a lower-intensity “neighborhood business” rezoning instead of the broader “mixed-use” classification Hamdan has applied for.

Hamdan’s attorney, Stephen Chesnut, said they selected mixed-use to match the zoning on the Jackson Avenue corridor a block away. Kropog replied that the intensity of the zoning should be reduced for businesses within a residential neighborhood.

“Something that’s a block off, there’s a big difference there,” Kropog said. “What if your particular business model goes under? The zoning sticks with the building. It opens up so many negative possibilities. … [Mixed-use] opens up lot of possibilities where you can do things that maybe the neighborhood isn’t crazy about.”

Hamdan said he was open to revising his request to a different commercial zoning, but needs something other than strictly residential in order to lease it.

The boxy floor plan of the nearly windowless 2,300-square-foot building will make it nearly unsuitable for someone to live in, he said.

“There’s no way you can make any rent or revenue as a residence,” Hamdan said.

Nearby resident Qi Wiggins expressed her own skepticism at the rezoning proposal, given its long period of neglect and Hamdan’s ownership of the previous corner store.

Further, Wiggins said, the building’s location a block off Jackson Avenue in the shadow of the blighted former Sara Mayo hospital makes it an unlikely candidate for a business tenant.

“I think he’s trying to do a catch-all and go back to packaged liquor,” Wiggins said. “Who would ever rent something across from Sara Mayo? That’s mind-boggling to me. You’re saying you want this here, but if I was a consumer looking to rent this from you, it’s got like 50 million red flags.”

Hamdan replied that more commercial activity is coming into the neighborhood now, and reiterated that he has no interest into returning to his business of nearly 20 years ago.

“I’m a different person,” Hamdan said. “The neighborhood has changed. There’s a Walmart a few blocks away.”

Hamdan has already begun internal work on the building’s plumbing and electrical systems, but the city halted it while he obtains the permitting for the property, Hamdan said. He plans no no major exterior renovations.