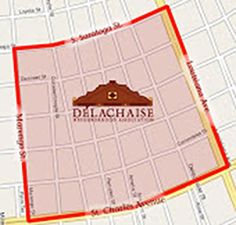 The Delachaise neighborhood is getting closer to becoming a security district. Organizers are pushing for active patrols by the second weekend of Carnival parades.

At the Delachaise Neighborhood Association meeting Tuesday (Jan. 21), board member Remy Richard said the association was awaiting the release of funds from the city before he sent out a prospectus to security companies to patrol the neighborhood bounded by Carondelet and South Saratoga streets, and Louisiana Avenue and Marengo Street.

Delachaise residents began exploring the formation of a tax-based security district in 2017, after a wave of violence struck the area. The neighborhood association has long employed a part-time patrol funded by volunteer donations from residents. Now all property owners within the district pay a special assessment with their taxes.

The Delachaise Security and Improvement District was created by state statute in 2018. In the October 2019 election, a referendum authorizing the annual assessment of $300 passed with 64% of the vote. The funding for the additional security and crime prevention initiatives will need to be renewed in three years.

“The patrol would be from 6 p.m. to 6 a.m., seven days a week,” said Richard, starting the second weekend of parades, if the association gets the funds in time. He noted that the cyber attack on the city computer systems has probably delayed it.

Talva Burnette from the Mayor’s Office of Neighborhood Engagement said that there were still departments, such as Public Works and Code Enforcement, that still do not have emails or computers that work.