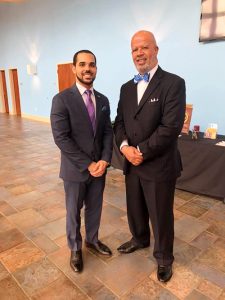 Other names that have been bantered around are Clint Smith, who previously ran for Traffic Court, and Jennifer Medley, daughter of former Civil District Court Judge Lloyd Medley.  Both have been contemplating a fall 2020 judicial run but could push up their plans.

Former Judge and City Councilwoman Nadine Ramsey is currently serving ad hoc and does not plan to seek the position at this time. There is also speculation that former Judge Desiree Charbonnet may be contemplating another run for office due to her recent billboard campaign. The qualifying fee for the position is $750.

The judgeship race will be held during an “off” election, when turnout is traditionally low.

Qualifying will also take place for 140 positions – 14 from each of the city’s five council districts – for the two parish executive committees.  With a nominal qualifying fee of $112.50, these races are a great opportunity especially for young people to become more involved in politics at the grassroots level.

Many people have successfully used the parish committees as a spring board to run for office. Elected officials often remain active with these groups to feel the pulse of the community.  Campaigns for these positions have become quite spirited with established political organizations creating ballots, targeted social media and setting up phone banks.

Elections will also be held for seats on the two more exclusive state central committees. The Democratic State Central Committee is comprised of one female and one male from each state Senate district in Orleans Parish.  The Republican State Central Committee has the same number of available seats but previously was allowed by law to select more males than females at the state level. Republican leaders will have to mount a court challenge to continue that practice.

Since the parish committees serve as a great training and networking opportunity, the lack of gender equity at the state level has probably also diminished the number of Republican women running for parish-level offices in Louisiana. Republican women should have an equal opportunity to serve on their party’s state governing body. It’s demeaning that Republican women would be considered less worthy.

MY FAVORITE CHRISTMAS PRESENT WAS A STUN GUN

When a friend’s elderly mother-in-law asked what my favorite color was, little did I know she was gifting me a baby-blue stun gun. Though murders continue to decrease in Orleans Parish, crime – especially car burglaries – is still out of control. My stun gun might well become my new evening companion. No citizen should carry a weapon without the proper permit and training.