A turbine explosion at the Carrollton Water Plant injured at least two people and shook windows and nerves in the Hollygrove area Saturday afternoon.

The New Orleans Emergency Medical Services reported at about 2:30 p.m. that it had transported two people to the University Medical Center with injuries. A third person was reported injured but had refused treatment. 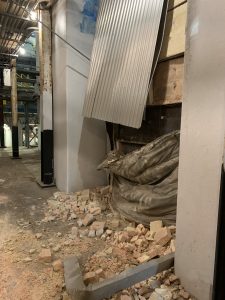 At about 3 p.m. the Sewerage & Water Board reported via Twitter: “Situation stable at Carrollton Water Plant. Emergency Response on scene. Surrounding neighborhoods are safe. We can confirm an explosion of a Turbine 5.”

Residents are advised to avoid the area.

The utility then switched to Turbine 5, and an explosion occurred. With both turbines down, the S&WB declared an emergency to expedite repairs.

“We will be conducting a forensic investigation of what happened to turbines and understand root cause of explosion,” he said. “We will power our water and drainage systems off other turbines, frequency changers, and EMDs, but loss of turbines hurts our redundancy to make electricity.”

The S&WB and the city’s Office of Homeland Security had reported the explosion at about 2:10 p.m.. “There is a heavy public safety presence responding to an incident near S. Claiborne & Eagle Street,” tweeted nola.ready.

All city websites and email account were down at the time of the explosion, as City Hall struggles to recover from Friday’s cyber attack.

Turbine 5, which powers S&WB operations throughout the city, had been returned to service in March 2018 after undergoing emergency repairs in the aftermath of the 2017 flooding.