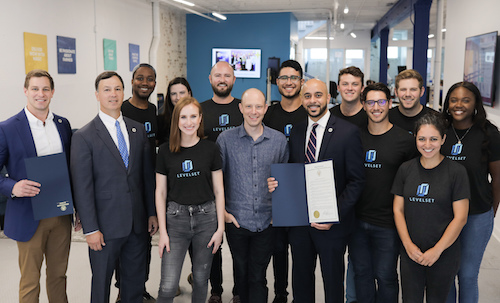 State Rep. Royce Duplessis (front, holding certificate) and others present Levelset with two resolutions from the House of Representatives and Governor’s Office in honor of its work to support the New Orleans tech industry. (via Business Wire)

Levelset, based in the Lower Garden District, is an example of the fast-growing tech industry in New Orleans.

Since 2006, New Orleans has seen “more than 45 high-tech startup or subsidiaries,” which resulted in “the creation of more than 20,000 jobs,” according to U.S. News.

Levelset provides a cloud-based payment and management platform for the construction industry, in an effort to cut through the slow pay cycles, burdensome paperwork and costly disputes in a what has been a relatively low-tech industry.

According to the U.S. Census Bureau’s Business Dynamics Statistics, two out of three construction businesses fail within five years — more than any other industry.

“The only reason businesses fail is because they run out of cash,” said Scott Wolfe Jr., Levelset’s founder and CEO. “Concerns over running out of cash and managing payments cause undue stress for construction businesses. We envision a world where no one in construction loses a night’s sleep over payment.”

Named by New Orleans City Business as the  No. 1 Best Place to Work in both 2018 and 2019, Levelset “helps contractors and suppliers get payment under control, facilitating smooth payments and successful projects,” according to the company’s website.

The Josephine Street company, which boasts 15,000 clients in all 50 states, has seen fast growth since it formed 10 years ago under the name zlien.

It’s now joined in the local tech industry by businesses like DXC Technology, which moved to New Orleans in 2018, creating jobs for more than 2,000 people.

The growth is in part due to the state’s tax credit incentives for the industry. The Digital Interactive media and software tax credit offers a 25% tax credit on qualified payroll for tech companies that operate within the state.

As a result, New Orleans was named No. 1 tech employment growth in the U.S. in 2017 and the No. 3 city for the lowest gender gap in tech salaries in 2018, according to the New Orleans Business Alliance.

While Levelset is a smaller tech business compared to DXC technology, the fast-growing company just raised $30 million in funding and plans on growing and hiring. Now it aims to create equal employment opportunities through its new Sales Academy program.

The eight-week paid training program teaches every aspect of selling Web-based software — also known as Software as a Service or SaaS. During this program, trainees earn how to acquire new customers, develop call strategies and retain current customers.

Levelset plans to add sales academy graduates as full-time employees to their sales team, and those graduating at the top of their class have the opportunity to become account executives.

Although the size of the first class was 14 people, the company plans on accepting 35 candidates to the second sales academy class. Those who graduate from the program can have potential target earnings of $54,000 to $85,000, company officials said.