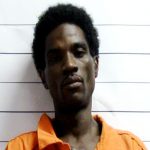 A man who walked into the Walmart on Tchoupitoulas Street on Tuesday evening and collapsed is a homicide victim, the New Orleans Police Department reported.

The victim was stabbed outside the store in the 1900 block of Tchoupitoulas at about 8:15 on Tuesday, police said. Bleeding from the neck, he stumbled into the shopping cart area of the store and died.

The victim, who has not been identified, was pronounced dead at the scene by Dr. Joseph Gannet.

A suspect, Marcus Connelly, 36, was arrested and booked on one count of second-degree murder. He remained jailed on Wednesday morning, with no bond set. Connelly’s past convictions include armed robbery in 2003 and burglary in 2012, according to Sheriff’s Office records.

Further details were not immediately available. Anyone with information is urged to call the NOPD Homicide Division at 504-658-5300 to speak to a detective, or Crimestoppers at 504-822-1111 to leave an anonymous tip that could be eligible for a cash reward.