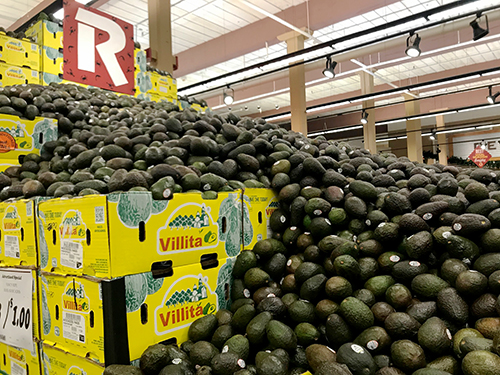 Shoppers at the Rouses on Tchoupitoulas Street are met with a mountain of 112,000 avocados in the produce department Wednesday. (Nicholas Reimann, Uptown Messenger)

The world record for the largest display of a Mexican fruit has been set by a Thibodaux-based grocery chain’s Uptown store on Tchoupitoulas Street.

If that sounds strange, here’s another way of saying it — Rouses shipped in 112,000 avocados, and put every single one on display.

The behemoth layout went up Wednesday at the Tchoupitoulas location, with images of it quickly spreading across social media after shoppers encountered the most avocados they had ever seen.

Rouses marketed the event as a new festival of sorts, saying Wednesday marked the start of the four-day “Avocado Fest,” which included chefs preparing avocado dishes, free samples of avocado and, yes, a photo opportunity with an avocado character.

The display and surrounding activities were all essentially a store promotion, albeit on a much larger scale than Rouses normally does, organizers said.

“It’s just something — we’re almost giving back to the community and giving everybody up here a great price,” said David Williams, a regional produce manager for Rouses. Avocados are selling three for $1 at all Rouses locations until next Wednesday, he said.

This also isn’t the first time Rouses has looked at breaking a world record for a promotion. In 2012, the store brought in 20,000 artichokes to put on display, also at its Tchoupitoulas location. 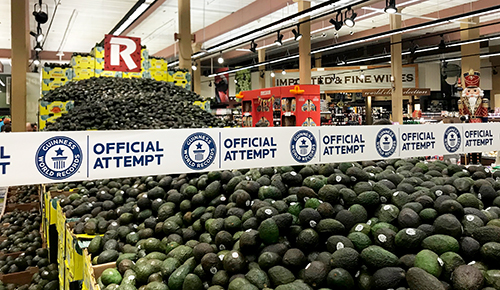 Rouses is aiming to set a new world record for largest display of avocados as part of “Avocado Fest.” (Nicholas Reimann, Uptown Messenger)

Certifying the world record is a process that will likely take around two weeks, Williams said, and would add a new record to Guinness’ collection.

Currently, it has avocado-based records like world’s heaviest avocado, world’s tallest avocado tree and world’s largest serving of guacamole — the latter coming in at 8,351 pounds — but no entry for largest display of avocados.

Much of the original display was taken down by Thursday, as Williams said many of the avocados had to be shipped to other Rouses locations.

It’s safe to say the Tchoupitoulas store had more than its normal supply, though. Williams said on an average day the store only has around 210 avocados on display.

Putting up this week’s display took up to 20 hours of stacking, according to the Avocado Fest Facebook event page, with organizers saying the whole process of getting the avocados took months.

“We’ve been having meetings for about two months to kind of coordinate everything between the grower, the shipper and all that. It took about two, three months,” said Kevin Cazeaux, a produce buyer at Rouses.

All of the avocadoes were of the Hass variety and imported from Mexico, Cazeaux said.

As for how “Avocado Fest” has gone so far, Williams said it’s been a resounding success, with the Tchoupitoulas store selling up to 28,000 avocados on Wednesday alone.

And much like the millennial taste for the fruit, organizers are hoping this year’s “Avocado Fest” is more than just a fad. Cazeaux said Rouses plans to give the event a regular spot on the calendar around this time of year, but maybe a little lighter on the avocado.

The store doesn’t plan on “breaking the record every year,” Cazeaux said.